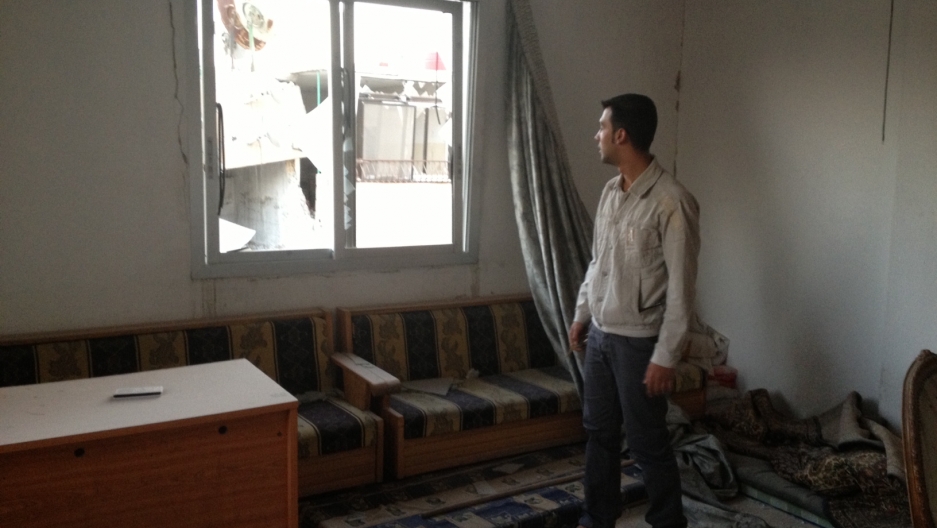 Mohammad Hmeidan inspects damage to his apartment in besieged Ghouta, Syria in 2013.

The Russian-Turkish agreement to designate a demilitarized zone may have averted an imminent attack on Idlib, but many of the Syrians who live there are still waiting for a more permanent solution to their displacement.

One such family is the Hmeidans. For the past seven years, they have survived hundreds of government air strikes, a government siege and the world’s worst chemical attack in a quarter of a century.

In the early hours of Aug. 21, 2013, hundreds of people perished as Syrian forces launched rocket and chemical attacks on the city of Ghouta while many civilians slept in their beds. Some entire families were killed. Outside their windows, the trees and the birds and the feral cats also died.

Mohammad Hmeidan lived 20 minutes away on foot — farther than the sarin could travel. I first met him in October 2013, not long after I had smuggled myself from regime-controlled Damascus to the rebel stronghold suburb of Ghouta, where the sarin gas had killed all living things within a small but densely populated radius.

How Hmeidan found himself living under siege with constant regime bombardment is a familiar story to many Syrians. 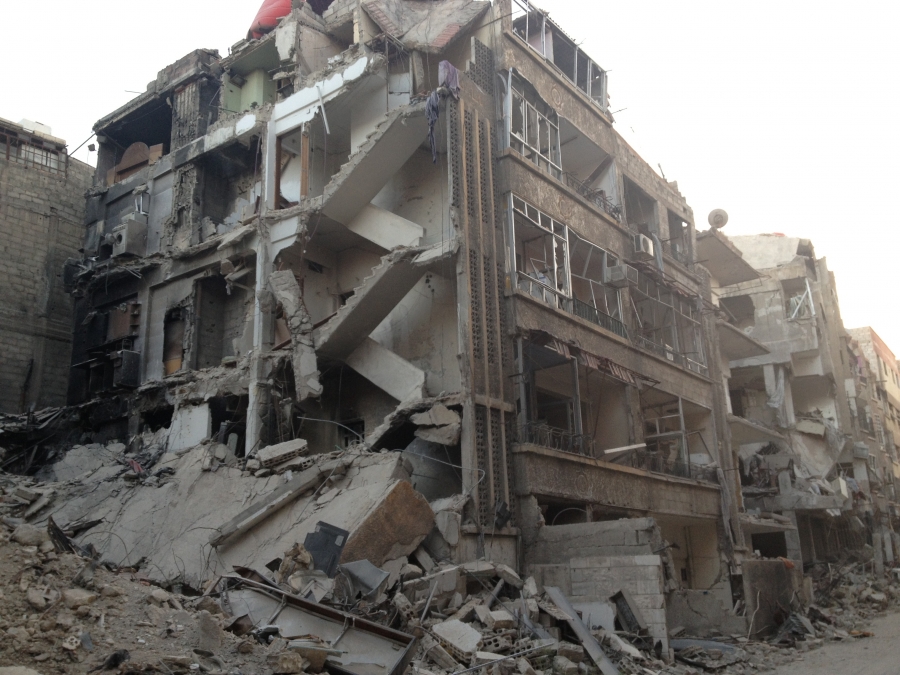 Hmeidan defected from the Syrian army more than a year after he was conscripted, which was just before the uprising began in March 2011.

Then the war gained momentum and Hmeidan’s village in the province of Hama was bombed, his family farm was destroyed along with the family’s wheat and cotton harvest. His mother fled to a refugee camp across the Turkish border. One of his uncles was detained by Assad’s forces, along with the uncle’s pregnant wife and their six children. They were never heard from again. Like tens of thousands of Syrians, they likely disappeared in regime custody.

“They didn’t even have anything to do with the uprising. This uncle just minded his own business,” Hmeidan said.

In the early days of the war, Hmeidan moved to Ghouta and joined his rebel uncles there. At first, he fought alongside the armed rebels against the very army he had deserted, but quickly decided that fighting wasn’t for him. So he became the rebel videographer, “preferring the camera to the gun,” as he put it. He started selling his footage to media outlets and making a living off the proceeds.

When I met him in Ghouta back in 2013, the area was under tight government siege. Troops had surrounded it, arrested and captured military-aged men who ventured out and prevented food, medicine and baby formula from entering.

I spent three days inside besieged Ghouta to report on daily life there, sharing the few olives that Hmeidan and his compatriots ate for meals, and the occasional piece of bread and fried egg. I felt hunger pangs unfamiliar to me before or since. I couldn’t understand how people managed to survive on such little sustenance. Prone to gallows humor, Hmeidan and his compatriots teased each other about their weight loss, calling each other “skeleton” and “feather.” 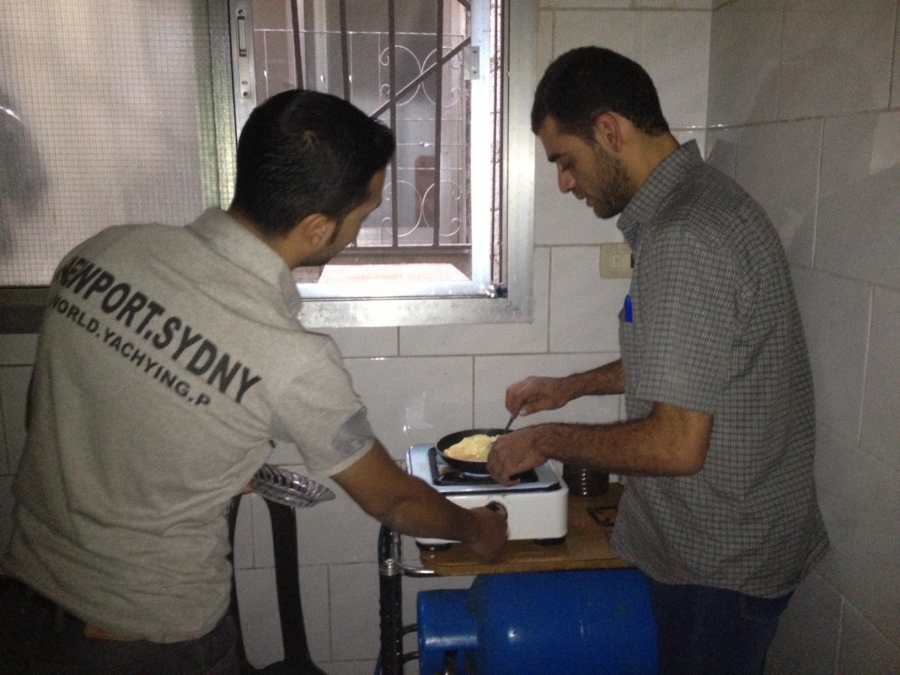 And it wasn’t just the hunger. Ghouta also endured daily shelling and aerial bombardment by Assad’s forces  — and later, by Russian warplanes who were defending Assad.

Related: Young Syrian men don’t just fear the war, they fear being forced to join it

But Hmeidan survived, along with his buddies and several cousins, aunts and uncles, sometimes spending days on end in underground basements for safe shelter.

In the early months of 2018, government forces began reclaiming rebellious areas, including Ghouta. The fight was over. Assad was winning. His troops gave the people of Ghouta two choices: either stay and “reconcile” or evacuate to Idlib and face the consequences later.

Related: With an iPhone and the internet, this Syrian satirist is having conversations his countrymen can't

Some 40,000 Syrians chose to evacuate. Hmeidan and his young family were among them.

Last week, I called Hmeidan over Skype to catch up and ask how he and his wife, Bayan, had managed the 21-hour evacuation from Ghouta with two toddlers.

“It was so tiresome. Along the way, regime supporters threw rocks at us and made threatening and rude gestures,” he said. “Maria [his 3-year-old daughter] wouldn’t use her diapers. She was already toilet-trained so she refused to go in her diaper and she kept asking for a toilet. We arrived here and her diaper was still dry. She held it in the whole way.”

As we chatted, Maria could be heard babbling in the background. Her father explained she was drawing a bug and a piece of Turkish Delight.

Hmeidan and his family are making a life for themselves in Idlib. They own the piece of land they live on and together they make ends meet. He still sells videos, his father opened a small grocery store and his mother works as a seamstress.

Earlier this month, the Hmeidans thought they might once again endure the deadly aerial bombardment and the dreaded prospect of fleeing their country and living as refugees.

In a bid to defeat the rebels once and for all, the Assad regime had amassed troops on the edges of Idlib, while its Russian allies launched a series of air strikes. It was a repeat of the same bombard-and-advance strategy that had won Assad Ghouta and other rebel areas over the past several months.

The international community warned this assault could unleash the worst humanitarian and refugee crisis yet.

The Russian-Turkish agreement reached on Monday might have averted the crisis, at least for the moment. It promises to oversee the creation of a nine-mile demilitarized zone between rebel and Syrian government lines so as to keep the two sides apart.

For the Hmeidans, this comes as a welcome development. But they haven’t forgotten the reason they joined the uprising in the first place.

“We want a permanent solution. For example, how about the international community support us in forming a shadow government — like a Free Syria government — as one step closer toward a post-Assad Syria?” Hmeidan wrote to The World. “It’s our right to determine our destiny.”