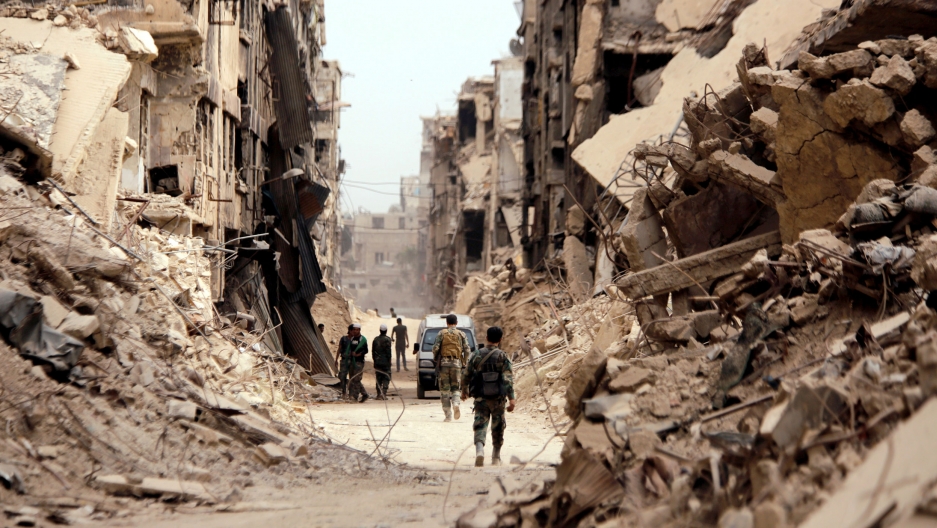 Soldiers walk past damaged buildings in Yarmouk Palestinian camp in Damascus, Syria, in May 2018. Satirist Jiim Siin, who grew up in Damascus, is creating audio dialogues online mimicking conversations that everyday Syrians should be having about their country but often can't. "Satire allows me to take a distance from what is happening and it allows me to shed light on things which may be very complex to write about," he says.

“Every time I get into a conversation or any discussion about the situation in Syria, I get very angry,” he says.

Jiim Siin is a Syrian who’s emotionally battered by what’s happened to his country.

He practically spits with rage whenever he hears a pundit use words like “the situation” or “the crisis” to describe the civil war in Syria. To him, they sound like economic indicators instead of an ongoing tragedy that’s killed hundreds of thousands and forced millions to flee.

His sadness, confusion and anger started in late 2011, when Syria was between the hopeful peaceful protest phase of the uprising and the fully weaponized response by the Assad government.

“I couldn’t stand the situation," Jiim Siin says. "I couldn’t stand my own anger and satire was the way to deal with it for me. Satire allows me to take a distance from what is happening and it allows me to shed light on things which may be very complex to write about.”

Jiim Siin is a pseudonym. For security reasons, he won’t reveal his real name.

The tools of Jiim Siin’s satire are his voice, his iPhone and his love of the Arabic language. In November 2011, he started tinkering with all three of them and posted a simple audio dialogue in Arabic on the web.

It featured two characters voiced by Jiim Siin. The first character asks the other what he’s doing. The second character says he’s protesting. The first guy keeps asking why and the second guy finally answers: “I’m pretending that everything is fine.”

It was a play on words. The Arabic verb for "demonstrate" comes from the verb "to pretend."  Jiim Siin loves to play with the Arabic language and has a keen ear for accents and dialects.

“There was a lid that was holding things inside," Jiim Siin explains. "That’s why I called my audio blog 'Chronicles of a Pressure Cooker' because I think things were kept in a pressure cooker and in one of the first recordings I made in late 2011 I said, you know, it might explode any time if we keep turning on the heat."

Things did explode and ever since, Jiim Siin has used the voices of his characters to variously hope, imagine, harrumph, shout or cry as the country has been destroyed by civil war.

He’s chosen to record "Chronicles of the Pressure Cooker" in Arabic because he wants to reach other Syrians.

He does so through four Syrian characters who represent different perspectives on the civil war. They chatter, bicker, complain, sometimes abuse each other, and once in a great while express the tiniest bit of hope about the civil war that’s destroyed their country.

There’s Tariq, an educated man who used to work in theater. Now he gets by doing this and that. He left Syria at one point but went back. Now he’s stuck in Damascus, watching his country fall apart.

Elias Muhanna is Lebanese and teaches comparative literature at Brown University. He’s a huge Jiim Siin fan and thinks the Tariq character is a sort of stand-in for Jiim Siin.

“He’s somebody who used to work in the theater," Muhanna says. "He’s a lighting designer, kind of freelance. Has sort of leftist politics but is not dogmatic about them. He’s something of an idealist but he’s also a realist. There’s something bitter about his reflections.”

“He’s very emotional," Muhanna says. "He’s someone who gets sucked into these protests and demonstrations and swings from one poll to the other. So he’s maybe somebody that many ordinary Syrians would identify with because he’s not very rational all the time whereas Tariq is really very cold and calculating.”

In one episode, Tariq asks his sidekick to try to guess the sounds of the different bombs they hear falling on Damascus.

It’s a game but then turns serious after they remind themselves that the bombs are real and they start to imagine what is happening to the people the bombs are falling on.

Jiim Siin’s other pair of characters are a gruff Assad regime supporter, basically a nameless security goon; his foil is a put-upon, meek guy named Mulazim (lieutenant) Zift. The dialect word zift means tar and the name roughly translates to Lieutenant Zero or Lieutenant Nothing.

Mulazim Zift, or Lieutenant Zero, comes across as weak and spineless, but his character really exists to illustrate what a buffoon his superior, the security officer, is and how Zift's inner feelings are sometimes different from those of his boss

Muhanna says "Chronicles of the Pressure Cooker" works because it’s by a Syrian, directed at Syrians and it genuinely reflects Syria. The characters are not paper cutouts designed to deliver a particular message. They are recognizable types who talk and argue the way people actually talk and argue in places like Syria and Lebanon.

Muhanna says Jiim Siin’s audio plays reflect that kind of rhetorical atmosphere and that makes his satire all the more compelling and powerful.

Lebanese satirist Karl Sharro, whose pen name is Karl reMarks (typical quip: "So many foreign powers interfere in the region, we should rename it the Meddle East") listens and relistens to Jiim Siin’s audio plays. Sharro grew up during the Lebanese civil war (1975-1990) and says satire was one of the only things that united his country during those years. He sees Jiim Siin doing a similar thing with his audio satire: capturing what it feels like to be on the inside of a catastrophe.

“A lot of the time you feel like a kind of spectator and you’re not the author of events," Sharro says. "You’re the recipient of the events. And there’s this kind of large political and media narratives fighting over what it represents which kind of could leave you in a way isolated and alienated.”

For Muhanna, there’s another thing about "Chronicles of the Pressure Cooker" that really draws him in and stirs feelings of nostalgia.

“Each one of these characters speaks in a way that you just don’t hear very much anymore,” he says.

Jiim Siin's audio plays indulge his love of the Arabic language. He loves to play with words and won’t hesitate to resurrect old phrases.

“It sounds like the way my grandparents spoke,” Muhanna says. “It’s a very rich form of Syrian Arabic, expressions, proverbs, things that I often have to look up because nobody says these things anymore. So I was at first drawn to that. I thought: Who is this person who is making these very funny, very sophisticated commentaries on what’s happening in Syria right now?”

Jiim Siin based "Chronicles of the Pressure Cooker" on a popular Syrian radio play he grew up listening to in the 1960s and 1970s called Saber and Sabriyeh. It was simple: a comedic dialogue between a husband and wife who bat funny comments back and forth as they deal with the ups and downs of married life. The title is a pun: Saber and Sabriyeh, the couple's names, are based on the Arabic word for patience.

Sharro finds the simplicity of Jiim Siin’s "Chronicles of the Pressure Cooker" layered and nuanced. At its core, says Sharro, Jiim Siin is one anonymous Syrian using satire to metaphorically wail, hope and agonize over what’s become of his country.

“He is one of probably millions of voices in Syria who’s trying to carve a sense of meaning in a highly individual way, albeit using this kind of device, which I think is very telling, the question and answer, the same person doing multiple voices, which suggests a dialogue, but in a way, it’s a poignant remark on the lack of any dialogue going on in Syria,” Sharro says.

For Jiim Siin, his audio plays are not about offering solutions for Syria. They’re about tapping into the emotions and feelings of fellow Syrians.

“The more you touch people’s feelings rather than ideas, the more you can get reaction from them," Jiim Siin says. "I feel it’s really needed. There are loads of ideas but at the end of the day you need to touch the way people feel to make any change, even if it’s very very small.”

If you understand Arabic, or simply want to listen to the sound of it, here is the complete archive of "Chronicles of the Pressure Cooker." Jiim Siin is also on Facebook and Twitter.

Because of translation errors, a previous version of this story mischaracterized some of Jimm Siin's characters.