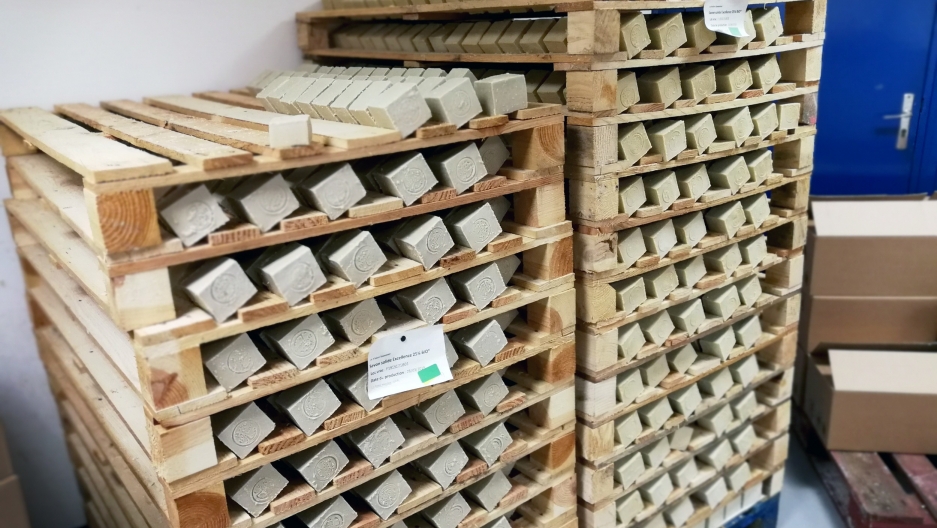 Alepia's soap sits on drying racks for about nine months before it can be sold.

Samir Constantini would have been born in France, but his Syrian mother insisted on traveling back home to Damascus just to give birth.

Even though Constantini grew up in France, he never lost his affinity for his parents’ culture, including a love for an ancient household staple — Aleppo soap.

Syrians say the brownish soap has been made in the northwestern city of Aleppo for 3,000 years. It’s a pungent soap made with natural ingredients, mostly olive oil and laurel oil. It’s used across the Middle East for all kinds of cleaning: showering, shampooing, washing clothes and even soothing skin rashes.

“Every summer my wife would bring some of the soap to France back from Syria, and I loved it,” says Constantini, a physician. “I told her: ‘I’m sure in France, this will be very successful.’ That’s how I got the idea.”

The idea was to import Aleppo soap into France. In 2004, Constantini headed to Syria where he bought seven tons of it. At first, the product so beloved by Syrians was poorly received in France.

“It was a tough task because this soap was unknown,” he says. “And when my reps would try to sell it to pharmacies, no one wanted it. They didn’t know what it was and were reluctant to buy a product made in Syria.”

It took Constantini two years to sell his entire stock. But instead of giving up, he went back to Aleppo and bought 12 more tons of the stuff.

Eventually, the product caught on, his family got involved in the business and he rented a big warehouse. 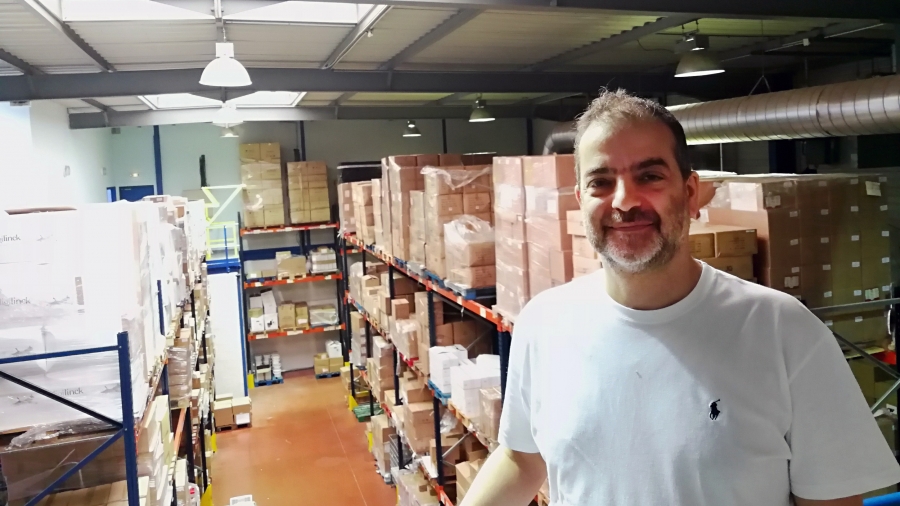 Samir Constantini poses for a portrait in his warehouse outside Paris. He first imported 7 tons of Aleppo soap to start his company. Now, he's producing it on site and preserving the art of Syrian soap-making.

Constantini says the company’s online sales and exports to Europe and Asia began to swell. He called his company Alepia. It’s now based in Santeny, just outside Paris. Constantini says the strong fragrance that fills the warehouse is the laurel bay essential oil that gives the soap a healthy and clean smell. He explains because the soap is all natural, Syrians can clean even fragile items with it, from baby clothes to fine rugs. And it even has health benefits and can be used as an antiseptic.

For years, Constantini was able to import his soap directly from Aleppo, where it was handmade in large cauldrons, following an ancestral recipe. But in 2012, the war changed everything.

After soap factories were destroyed, Constantini decided he should make the soap in France. 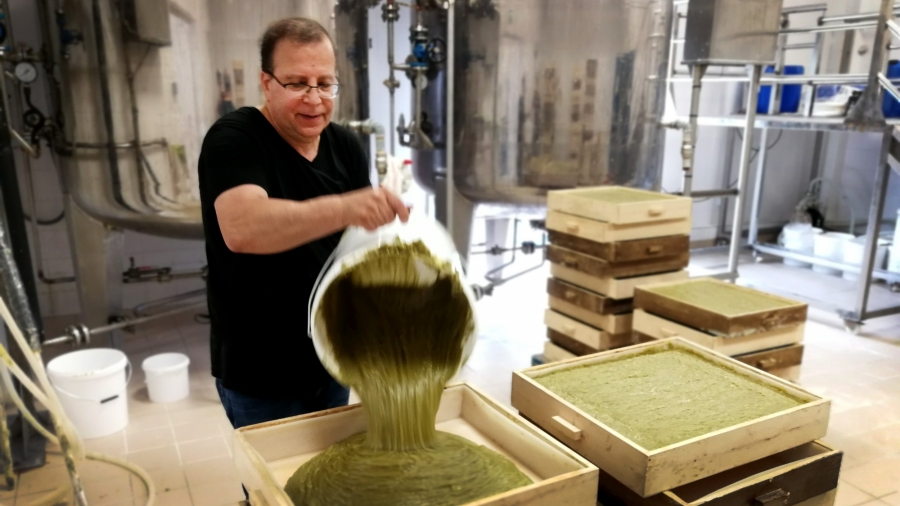 Hassan Harastani, fled war-torn Aleppo for Lebanon after running his own factory for 30 years. He later came to work at Alepia's factory, just outside of Paris. “We are living in a secure place, beautiful country, nice people and my children are with me,” he says. “For that reason, I am living in peace.”

Constantini asked Harastani to come to France to work for him. And Harastani credits Aleppo soap with helping to save his life.

“We are living in a secure place, beautiful country, nice people and my children are with me,” he says. “For that reason, I am living in peace.”

Today, Harastani is working on a large batch. It requires oil — 60 percent olive, 40 percent laurel bay — lye and water. It’s stirred at a hot temperature for three days, in a tall two-ton capacity stainless steel vat. Then the mixture — which looks like thick pea soup — is poured out, one big bucket at a time, and spread into square molds with a large spoon. Making Aleppo soap requires time. It needs to dry and mature, just like great cheese. So the soap will sit for nine months on wooden racks before being sent to retail stores. There are dozens of darkened rooms in the factory where thousands of cubes of the brownish soap — about 100 tons of it — dry.

It’s clear that Constantini is proud that his perseverance with a once little-known ancient bar of soap has paid off. Especially because the next generation of soap-makers is now being trained at his facility.

“Aleppo soap has been a sort of refugee in France,” he says. “It allowed us to continue the traditional making here.”

Some soap factories have reopened in Aleppo. Constantini says he hopes the resurgence of this ancient soap is a sign that peace may be coming to his ancestral home soon. 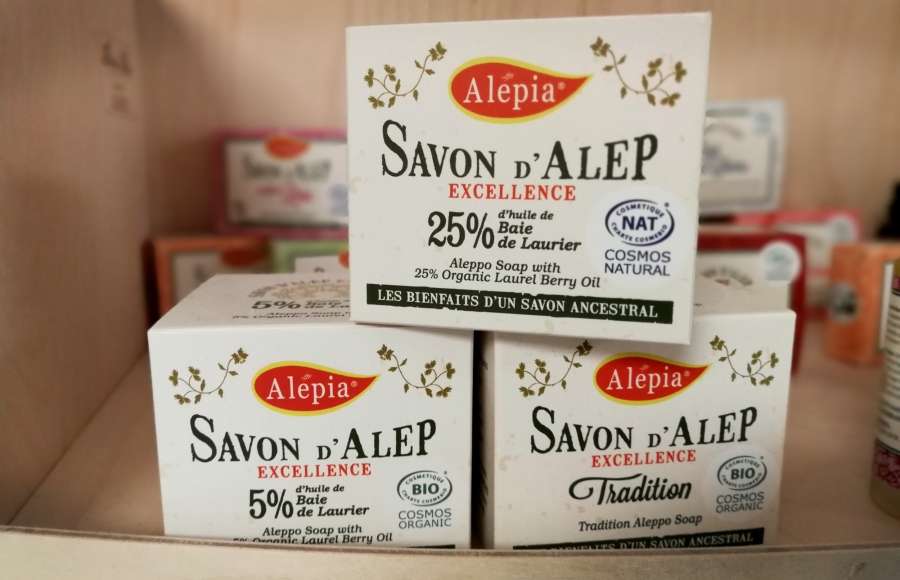 Alepia soap packaged for sale. Samir Constantini first imported his soap from Aleppo. Now he operates a warehouse and factory just outside of Paris.