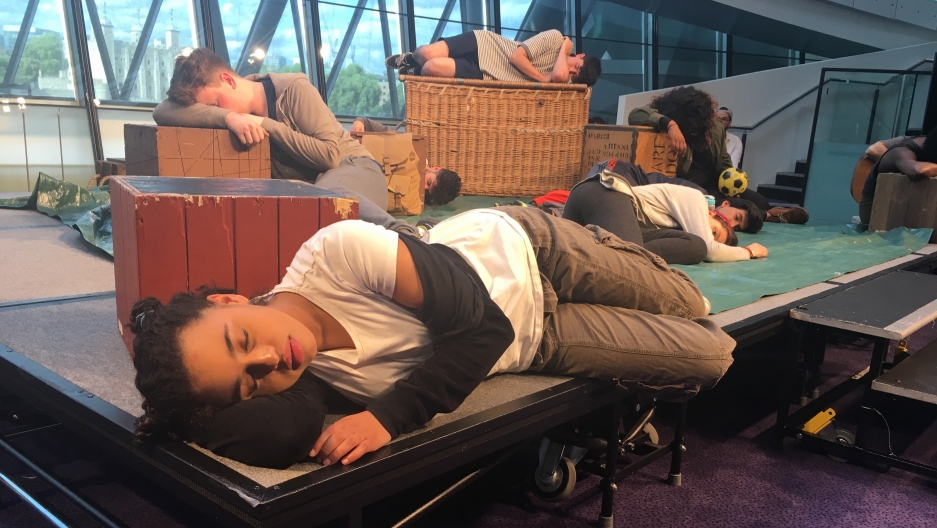 Yusra, played by Rhianna Merralls, struggles to fall asleep in the play, "Wherever I Lay My Head," performed in London City Hall.

It’s less than an hour until showtime and director Andrew Whyment is perched in a chair, giving final notes to the cast of the play “Wherever I Lay My Head.”

The 18 young actors stand around a small, makeshift stage in an auditorium in London’s City Hall. Behind them, a wall of glass windows rises several stories high, opening out towards the Thames and London’s skyscrapers.

This glorious view of London contrasts with the subject matter of the play — the struggles of young migrants who come to the UK. “Wherever I Lay My Head” is a joint production of the National Youth Theatre and the children’s charity Coram, with support from the Mayor’s Peer Outreach team.

Back in 2015 and 2016, during the height of Europe’s migration crisis, several thousand unaccompanied minors arrived in England seeking asylum, many from as far away as Afghanistan or Eritrea. Ana Draper, a child psychotherapist with Coram, was hired by the National Health Service to help determine a strategy to support these young asylum seekers in reception centers, group homes and foster homes.

“My job was to come in, meet with young people and think about what our response needed to be in terms of emotional support,” Draper says.

A lot of the children told her that they were unable to sleep.

“I did an audit of the kids and 87 percent had disrupted sleep patterns,” she says. “They were hyper-vigilant and stayed awake at night.”

According to Draper, after months of traveling at night, these kids had something like chronic jet lag. They were also haunted by nightmares of the past and anxiety about the future. The sleepless nights made it hard for them to attend classes, think clearly and properly integrate.

The writer Jamila Gavin was commissioned by Coram to write a script based on interviews that Draper conducted with these young migrants. Draper, who serves as the play's technical adviser, says that watching the play now makes her feel as if she is in the room with those kids again.

“There are moments when I think — oh, I know that voice! I know those words. I can see the face of the child who spoke it,” she says. 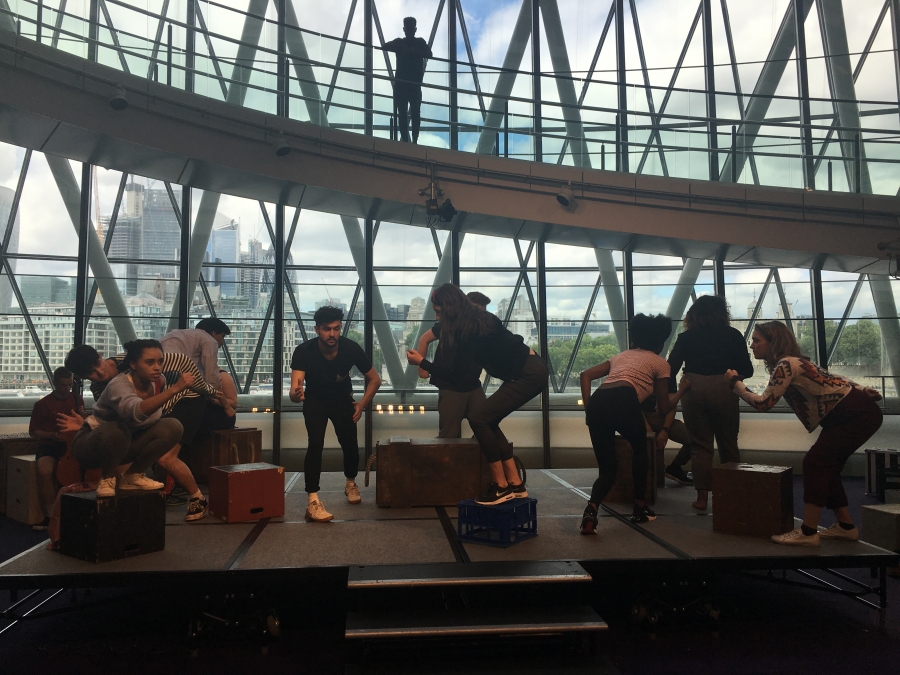 The play tells the story of three young migrants who travel to England together. They all suffer from sleeplessness.

The lines seem even more powerful because some of them are spoken by young migrants, some of whom came to England on their own. The cast includes five people from Coram's Young Citizens, a youth group for people from migrant and refugee backgrounds.

One of the cast members, Omar Alfrouh, 18, moved from Syria to the UK just over a year ago to join his family and pursue his studies.

He says the play reminds him of his brothers and his father, who followed the migration route across Europe before finally making it to the UK.

“They walked from Turkey to France and stayed there a year before they made it to London,” Alfrouh says. “They often went to sleep hungry without any kind of shelter.”

Alfrouh says that even though he didn’t undergo the same tough journey to the UK, he found life in England a lot harder than he imagined.

“The first two or three months, I didn’t sleep well,” he says. “It was hard for me. I had no friends and I had to build everything again. I just had one idea — I wanted to go back to Syria.”

Eventually, he had a change of heart.

“I realized I am here, so I have to build a life for myself in this country,” Alfrouh says.

Since then, he has thrown himself into life in the UK by signing up for lots of activities. His massive grin shows how much he’s enjoying his first stab at acting.

“It is amazing to find people who support you and give you a chance, even if you aren’t a professional,” he says. 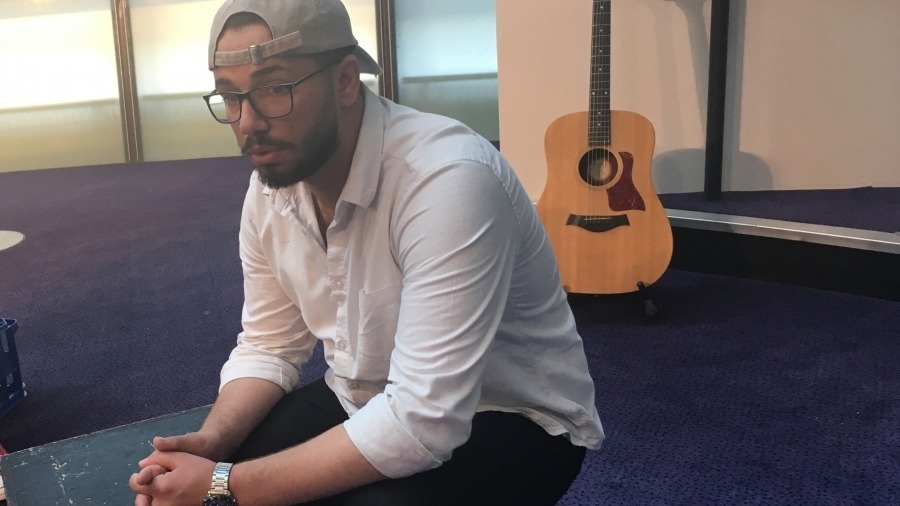 With just a few minutes left until showtime, a warm buzzing “ahhhh” emanates from the dressing room — the sound of the cast doing a vocal warm-up. They scatter for last-minute preparations, with one cast member lying on his back with his legs up on the wall. Rhianna Merralls sits on the floor in the green room, running lines.

Merralls plays Yusra, a refugee who is one of the three main characters. Merralls says that working with cast members from migrant backgrounds like Omar has made the whole thing more real.

“I want to do it justice because I’ve met people and heard their stories,” Merralls says. “It’s the first time I’ve done a play that matters. Everything else I’ve done has been entertaining. But this is real, so I feel the pressure.”

The director, Andrew Whyment, says he hopes the play makes the audience think.

“I hope it sparks a fascinating conversation afterward,” he says. “That’s what it is all about.”

The play uses a chorus to tell the stories of three young migrants — Sami, Yusra and Mohammed — who flee a war-torn country. 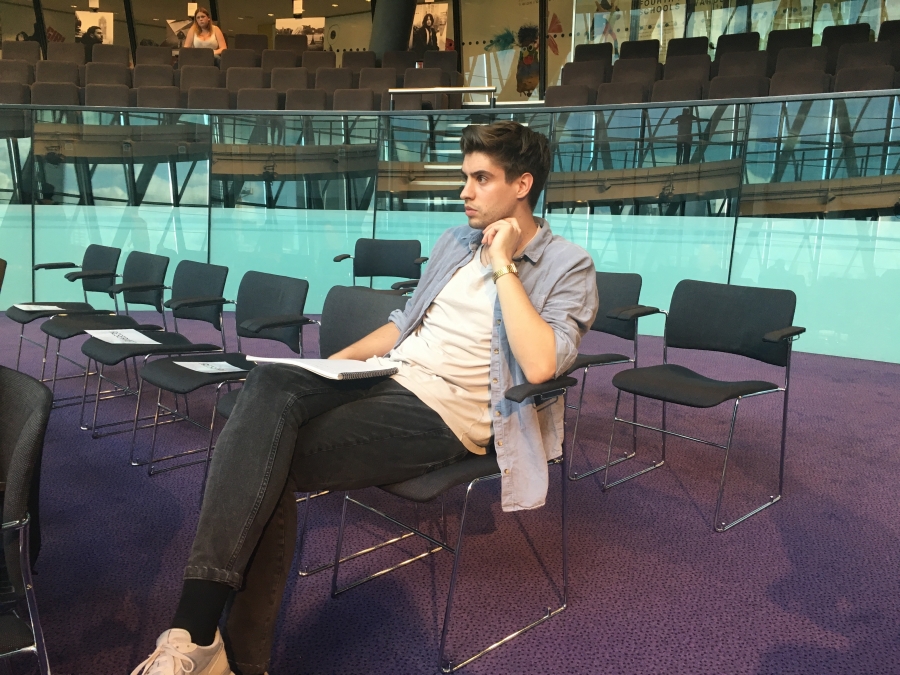 "The most harrowing part of the play is when they reach the UK and it is still traumatic," says director Andrew Whyment, who has worked with refugee actors on several occasions.

After a long, hard journey, they make it to the UK. But it is more challenging than they thought it would be. Upon arrival, they're grilled by officials, which many find traumatizing. This is written as a tense back-and-forth between well-meaning local authorities and the newly arrived young migrants.

Why have you come here?

My father is dead! I’m going to live with my aunt and uncle! They’ll look after me.

We have to investigate your case. We have to protect you from exploitation. If you have relatives, we’ll find them.

My town my house and everything I own was burned to the ground. My entire family was killed. I have nowhere else to go!

Calm down. We have to go through these procedures…

In this strange new place, Sami, Yusra and Mohammad struggle to sleep — just like the migrant kids that Ana Draper worked with.

“I wish I were home with my mother and father,” whispers her traveling companion Sami, played by Samuel Longville. “I keep thinking of the journey we’ve done.”

Then, there’s this incredible moment. Omar Alfrouh from Syria steps forward and stretches out his hand.

“We’ll keep you safe,” he says. Slowly, the children are able to sink into that elusive sleep.

In the play, the adults try to help the kids sleep. In real life, Draper and her team came up with strategies to help get them on a regular schedule. They also worked with the young people in reception centers to put together special “sleep packs,” filled with eye masks and nightlights, earplugs and little bags stuffed with soothing lavender. They also gave them Guatemalan worry dolls to represent the people they love and worry about.

“We taught the children to name the dolls and put them under their pillows,” says Draper, who has worked extensively with bereaved children. “It gave them permission to have worries, but to also rest.”

Draper says that when the kids left the reception center, not a single one left behind their sleep pack.

Omar Alfrouh also has one of the last words of the show. At the end, the young migrants step forward to each say a line. Omar’s beaming. He says he came to the UK to study and that he wants to be both a brain surgeon and writer.

“It doesn’t matter how many years you take to achieve your dreams!” he says.

In the audience, all eyes are on this Syrian teenager. He stands tall, backed by the wall of windows. The London skyline — and all its possibilities — stretches out behind him.