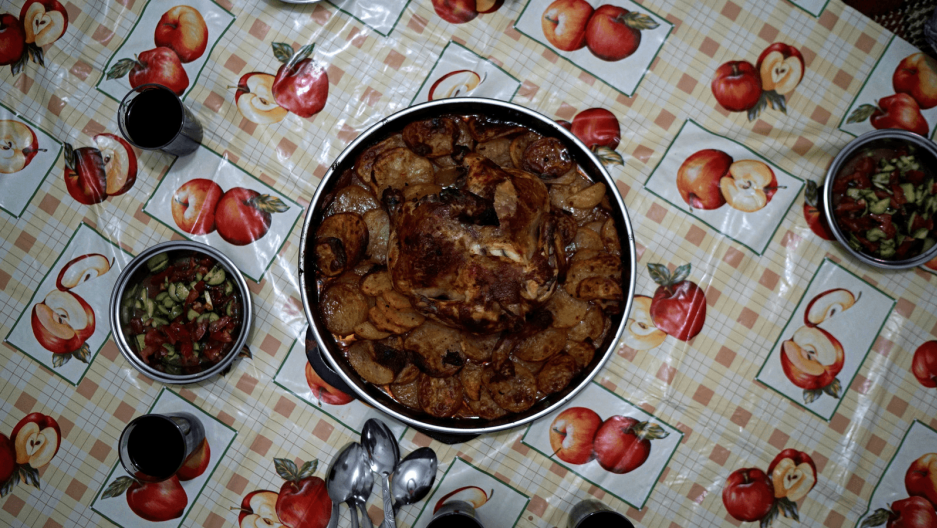 Six years after she left her home in Syria for Turkey, Om Mohammed is running a modest restaurant out of several rooms she is renting in an older building near her home.

The whiff of nostalgia lingers long after Om Mohammed has finished cooking. From this small restaurant in the southern Turkish city of Gaziantep, Om Mohammed is serving an assortment of traditional Syrian dishes, including stuffed eggplant and zucchini, chicken over rice and lamb meatballs in cherry sauce.

But what has customers lining up is Om Mohammed’s kibbeh — mouthwatering bites of bulgur filled with minced lamb or beef.

It wasn’t long ago that Om Mohammed was cooking kibbeh for her family in Aleppo. She, her husband and five children fled Syria’s once-largest city when clashes between rebels and the regime forces intensified in 2012. They arrived in Gaziantep that summer after crossing the border illegally on foot.

“It was easier in those days,” she said of being smuggled into Turkey.

Turkey is currently hosting 3.5 million Syrian refugees like Om Mohammed. According to the United Nations, an estimated two-thirds live below the poverty line.

Starting life over in a foreign country wasn’t easy for Om Mohammed and her family. Within five months of their arrival, she learned that her husband’s plastic factory in Aleppo was looted by rebels. Around the same time, he suffered a debilitating stroke that left him unable to speak, much less work.

On top of that, the money they had brought with them from Syria had run out. Om Mohammed feared for the worst.

“I didn’t want my children to have to beg in the streets,” she said.

Although she had never worked outside the home, Om Mohammed began looking for a job. She faced the same issues many refugees do in their new host countries: breaking into the labor market without language skills or a work permit.

Eventually she, like many Syrians, found a job in the informal sector. She began work as a housekeeper for another Syrian family and was paid under the table.

Occasionally, she would cook for her new employers, and when the family hosted guests, those guests would invite her to cook for them as well. Before she knew it, word of mouth had earned her cooking a following among Syrian families wanting a taste of home, as well as NGO workers and Turks who couldn’t resist Om Mohammed’s recipes.

Now, six years after she left her home in Syria for Turkey, Om Mohammed is running a modest restaurant out of several rooms she is renting in an older building near her home.

“It was difficult at the beginning,” Om Mohammed said of balancing work and home life. “But then I got used to it.”

Working before the war

In 2010, before the Syrian revolution began, just 22 percent of women participated in the workforce. On average, women’s wages were 20 percent of men’s, according to the World Economic Forum.

The reasons for this weren’t entirely institutional. The 1973 Syrian constitution ostensibly grants women equality with men, and in the decade leading up to the war, the ruling Ba’ath Party introduced some policies encouraging women’s education and participation in the workforce.

According to Hiba al-Ahaji, a former college professor-turned-activist whose work focuses on women's rights, cultural norms had a bigger role to play in determining a woman’s access to work.

“You had to work in the space that men determined for you,” said al-Ahaji. She said career options before the war were often limited to traditionally female-dominated occupations like nursing or teaching.

With the war in Syria now in its eighth year, countless women have seen their houses reconfigured with their husbands and male relatives killed, injured or missing.

“For many women, the boundaries previously around them have shifted,” said Michelle Lokot, a PhD candidate at SOAS University of London who researched Syrian households in Jordan.

Many Syrian refugee women are now working informally in their new host countries, or learning new skills to contribute to their families, Lokot said. “For some, the nature of opportunities has changed.”

Lokot, however, cautions against making any generalizations about these women. She points out that prior to the war many were already the heads of their households.

“Sometimes it’s assumed that Syrian men were the breadwinners and women didn’t work,” Lokot said. “But it’s quite difficult to pin down what was the traditional gender dynamic.”

But for Om Mohammed and her employees, working in Turkey was a new experience. She hired 10 women to work as cooks in her kitchen, each earning between 20 to 30 lira (roughly $3 to $5) per day.

“If not for Om Mohammed, I would not work,” explained the kitchen supervisor. “Here, I feel like I’m working in my own house.”

For many of these women, the restaurant is their only “suitable” option for work. Other means of earning a living, such as factory work or housecleaning, aren’t allowed by their husbands.

“Our community doesn’t always accept [my employees],” Om Mohammed said. “But regardless of traditions, of what people say, I am proud of our work.”

An uncertain future in Syria

With Syria’s war in what appears to be its final chapter, some refugees are beginning to return to what is left of their home country. Whether they’ll bring their new roles with them may depend on how much time was spent in their host country, and the degree to which it influenced their beliefs, explained Lokot.

“I think it really depends on what people’s lives and responsibilities were like before the war,” Lokot said.

Much in the way that norms about working women changed in America following World Wars I and II, activists are hopeful new attitudes about women may carry over into a post-war Syria.

Al-Ahaji, who was active in the early protests against the regime, says the revolution forever changed how society views women in the workplace.

“It’s impossible to go back to the way things were,” she said.