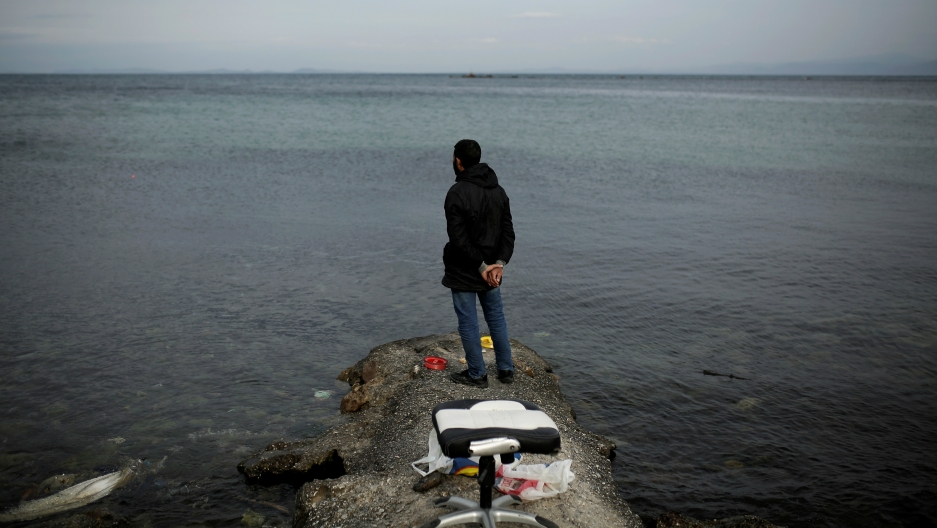 Syrian refugee Muhammad, 42, looks at the sea while fishing in the city of Mytilene, on the island of Lesbos, Greece, Dec. 2, 2017.

One year ago, Fahed left his home in Damascus, Syria, and, like many who fled the war before him, traveled to Turkey, where he boarded an inflatable dinghy bound for the Greek island of Lesbos.

“In Syria, you risk death left and right,” said the 27-year-old, echoing the sentiments of many of the more than 4 million who have left his homeland over the past seven years. “I left because I wanted to find a country where I could have a stable life, and begin to build something new.”

Unlike most of the refugees who traveled through Lesbos before him, Fahed, whose name has been changed for his security, is still living in a refugee camp on the island. Shortly after he first arrived there, the Greek Asylum Service interviewed him to determine whether he was eligible for asylum in Greece or should be deported to Turkey — a procedure that was put in place after the EU-Turkey deal was signed in 2016 to control the entry of migrants into Europe. Fahed still does not have an answer.

It’s a position in which many other young, single refugee men on the island also find themselves.

“I do not know whether I will be here another week, or another month,” he told PRI while stocking the shelves of a refugee aid distribution center where he volunteers to pass the time. Without legal status, he isn’t able to legally work in Greece, but feels more relaxed using his time to help others while he waits for a decision.

“But not knowing sometimes feels like torture,” he confesses.

While refugee arrivals on the Greek islands have dropped considerably since the EU-Turkey deal was implemented, they have not stopped. Since the beginning of 2018, almost 15,000 refugees have crossed the Aegean alone, with the majority of them coming from Syria, fleeing heavy fighting in eastern Ghouta, Afrin and Deir Ezzor. Only now, instead of quickly moving onto mainland Greece and the rest of Europe, they wait to hear whether Greece is responsible for protecting them or whether they will be sent back to Turkey.

“The situation on the islands — the overcrowding, the violence, insecurity — is inflicting enormous harm on the mental health of refugees,” says Eva Cossé, Human Rights Watch’s Western Europe researcher, who has looked into the refugee situation on the islands extensively. She says that vulnerable refugees, such as pregnant women, older people or families with small children, can have their asylum cases processed faster than single men like Fahed, who often wait the longest for an answer on their applications. Some men feel ignored and stuck.

“Single men are completely neglected,” she continues, elaborating on how classifying refugees as vulnerable or non-vulnerable has inadvertently created a new marginalized group. Now in order to move off of the island, an unaccompanied, able-bodied man like Fahed must either have family already settled in a European country in order to qualify for family reunification — a process that is becoming increasingly difficult as time goes on — or prove that he is a victim of either torture or sexual abuse in order to qualify as vulnerable. If he cannot — or worse, his experiences of torture or injury don’t qualify as extreme enough to impact his asylum case — he is stuck on the island with no other option but to wait.

What is more, without the protection of vulnerable status, the hundreds of young men in this situation are more likely to be given deportation orders to Turkey, a policy which Cossé describes as at best poorly conceived and at worst, deadly.

“I know what Turkey means for me,” says Alan, a 21-year-old Syrian Kurdish refugee who came to Greece shortly after the deportation policy was implemented two years ago. Even though Alan, whose name has also been changed, had spent all of six days in Turkey and had no means of gauging whether or not he would be persecuted there, he was given a deportation order shortly after he arrived on Lesbos. While he managed to appeal for one year of protection in Greece, his year is up — and according to the law, he could be deported at any minute. As Turkey escalates its war against Syrian Kurds in Afrin and the surrounding areas along the Turkish border, Alan is terrified that his Kurdish identity could endanger him if he has to live there in the current political environment.

“For me, it isn’t about the lack of work opportunities in Turkey for Syrians, or not having enough money to live,” he continues. “I actually think I could be killed.”

Greece originally implemented its containment policy, which requires extra processing for refugees to move onto mainland Greece, in order to manage the refugee crisis on the islands. However, it never stopped people from crossing the sea. Now, instead of accommodating people for a few nights, the island camps seem more like open-air prisons, trapping people who are already traumatized by a war in a cycle of poverty and uncertainty. Unemployment, drug use and fights are commonplace. While Fahed and Alan do their best to spend their time productively, they are the exception — not the rule. Little by little, young men like them are falling through the cracks.

“I got on that boat because I was ready for a life of security and stability,” Fahed continues, repeating a common refrain among refugees. “But it is exactly the opposite, and I don’t know how to escape.”