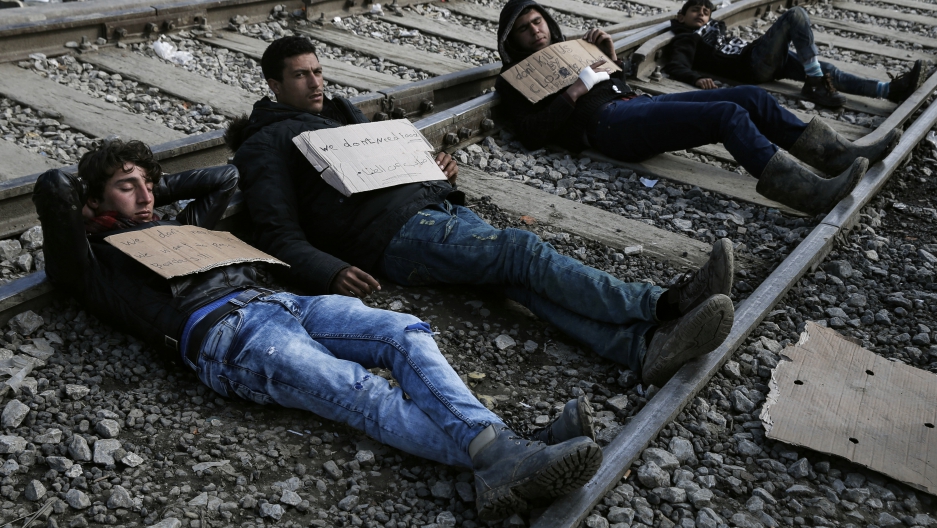 Syrian refugees protest on railway tracks demanding the opening of the borders, at a makeshift camp at the Greek-Macedonian border near the village of Idomeni, Greece, March 18.
Credit: Alkis Konstantinidis
Share

The European Union and Turkey sealed a controversial deal on Friday to curb an unprecedented flow of migrants to Europe in exchange for concessions to Ankara.

Here is a summary of the main points according to a copy of the deal obtained by AFP:

The key point of the deal: "All new irregular migrants crossing from Turkey into Greek islands as from 20 March 2016 will be returned to Turkey."

This includes both refugees fleeing conflict and persecution as well as economic migrants, and it applies irrespective of where the refugees originally come from.

The draft says it will be a "temporary and extraordinary measure which is necessary to end the human suffering and restore public order".

To meet international law, migrants will be "duly registered and any application for asylum will be processed individually by the Greek authorities".

Those who do not, or whose applications are rejected, will be returned.

The UN refugee agency will help with the returns process, according to a clause inserted late on Thursday.

All costs will be covered by the EU.

The EU will also "welcome Turkey's commitment that migrants returned to Turkey will be protected in accordance with the international standards."

The idea is to reduce the incentive for Syrian refugees to board dangerous smugglers' boats to Europe, as they will have good hope of being resettled directly from refugee camps.

Women and children will be prioritised under "UN Vulnerability Criteria." Priority will also be given to those who have not previously been deported from Greece.

The EU will use 18,000 spare places from an earlier resettlement scheme, and up to 54,000 places from a slow-moving plan to redistribute refugees in Greece and Italy around the EU.

The EU agrees to accelerate plans to bring in visa-free travel for Turkish nationals to the Schengen passport-free zone by June, "provided that all benchmarks have been met".

In practice it will be almost impossible for Turkey to fulfil the list of 72 requirements demanded by Brussels, especially on a shortened timeline.

The EU agrees to speed up the payment of three billion euros ($3.4 billion) in aid for refugees in Turkey, under the terms of an earlier summit in November.

The EU and Turkey agreed to open a new "chapter" in Turkey's long-stalled bid for membership of the EU -- Chapter 33, on budgets -- by July. It said preparations for other chapters would continue "at an accelerated pace".

But in a reference to Cyprus, which has long had tensions with Turkey, it said that would be "without prejudice to Member States' positions in accordance with the existing rules."