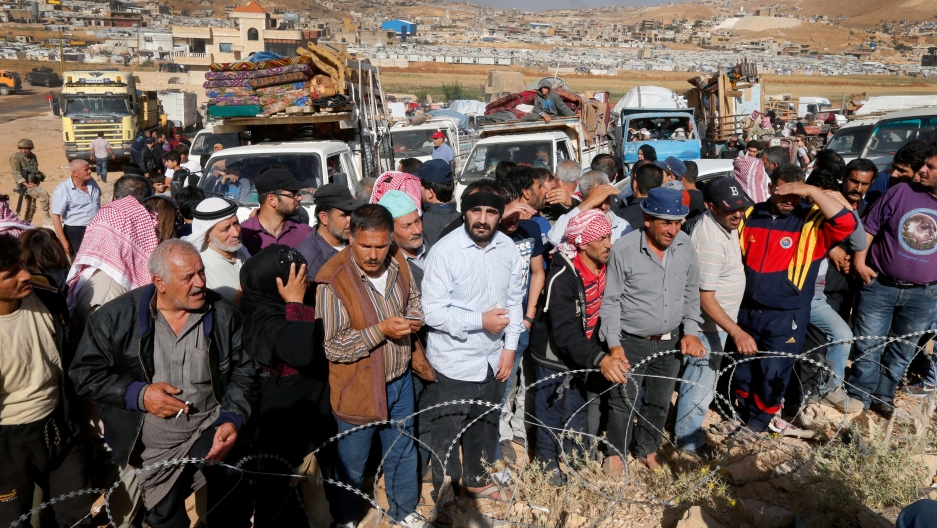 Syrian refugees prepare to return to Syria from the Lebanese border town of Arsal, Lebanon June 28, 2018.

When Ehab al-Hurriaya fled to Lebanon from Syria four years ago, it wasn’t just the fighting he was fleeing, but the fear he would have to join it. He had just turned 18 and would be forced to serve in the Syrian army.

“If I stayed, I needed to go to the military,” Hurriaya says.

Men between 18 and 42 are required to serve in the military, according to Syria’s constitution. They face a difficult decision: They must be conscripted into the army, or leave the country.

Hurriaya left his village, of Fleeta, and sought refuge in the Lebanese border town of Arsal, just 10 miles away.

Children play among the white tents and basic concrete structures in dusty, informal refugee camps on the outskirts of the town. More than 60,000 Syrians fled here and now outnumber the 40,000 local residents. It has put a strain on the town’s infrastructure and fostered resentment and against the refugees.

Hurriaya says local residents often call him names that he is embarrassed to repeat.

“Just being Syrian is a crime,” he says. 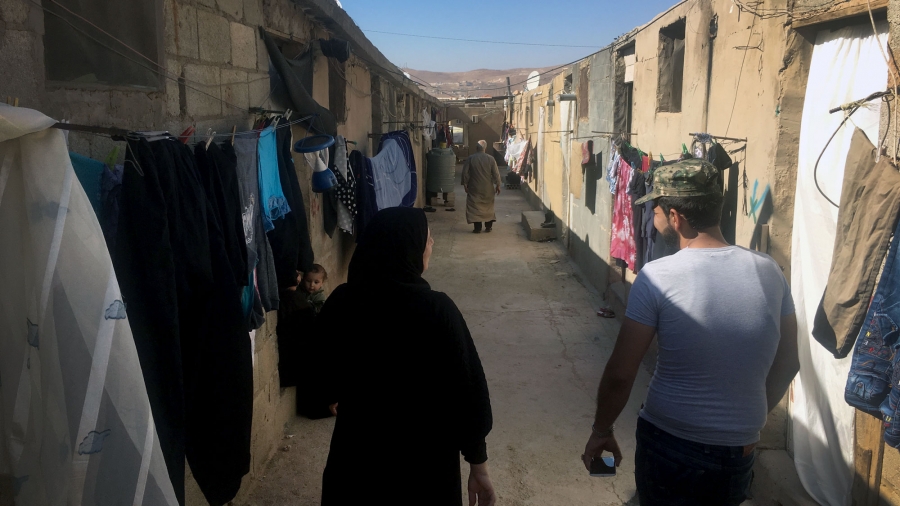 Ehab al-Hurriaya, right, walks through a informal refugee camp on the outskirts of the Lebanese town of Arsal, near the Lebanon-Syria border.

Life in Lebanon is tough and is only getting harder. One million Syrian refugees have escaped to the tiny country of just 4 million people. Syrians are banned from legal work and from building permanent housing. Many can’t send their kids to school and the international aid so many relied on is drying up. After years in exile, many Syrians have exhausted their savings and have sold everything they could.

That is pushing thousands to return to Syria via an agreement between the Syrian and Lebanese governments. Some refugees say they would rather risk going back home to war than continue to live in poverty in Lebanon.

In one of the dozens of tents in a camp in Arsal, a woman in her 50s prepares a simple lunch for her family — today, it’s just beans and some vegetables from the small garden plot next to her home. The family can rarely afford meat.

The woman and her husband don’t want to give their names. Like many refugees, they are nervous to talk about why they have chosen to return to Syria.

Her husband and their children fled their village just on the other side of the border almost five years ago. Since then, they’ve lived in a tent in this informal camp.

“This is the kitchen and this is the bathroom,” she says, pointing to the two small spaces divided by plywood in the back of their tent.

They are fed up with living in a tent, in poverty, when their home is so close, she says.  She and her husband have signed up to return, but their two adult sons won’t be joining them, knowing they face conscription if they cross the border.

Assad’s government is now approving Syrians to return, promising they won’t face arrest or other legal consequences, as they have in the past, and also offering young men a six-month reprieve from military conscription, the reason so many fled in the first place. After that, those who can afford it can pay $8,000 to avoid army service.

However, Bassam Khawaja, a researcher with Human Rights Watch, says it's difficult to trust the guarantees of a government that has arrested thousands of political opponents, torturing some to death.

“There is also a lot of conflicting information,” says Khawaja, who worries this new deal is just a way of pushing Syrians out of Lebanon and back into a war zone.

“We’ve seen for years now how the Lebanese government has put in place policies with the clear intention of pushing them back,” Khawaja says. “Now we are seeing the result of these policies with small-scale organized returns over the last year.”

Khawaja says the refugees face an uncertain future in Syria, where humanitarian aid is even more limited and the war rages on.

For most Syrians, like Hurriaya, the $8,000 needed to avoid army service was an impossible sum, even before they spent years in exile. So, they will stay outside the country. Tens of thousands face military conscription if they return.  Despite that, last month Hurriya also registered to return to Syria.

“I know I will go to the military if I go back to Syria,” Hurriaya says. “But between the bad and the worse, I chose the bad.”

Two weeks ago, Hurriaya got his approval and left for Syria. He says authorities at the border questioned him, but he felt welcomed at home.

Speaking on the phone from his village, he described how his mom threw rice and flowers as he arrived home. His village, which had been held by the rebels, is now in government hands and things are relatively quiet. He says his area has been damaged by the war but his home still stands.

But even though he says he is happy to be home, Hurriaya, now 22, is nervous. Not just that war could return, but because will soon be forced to join it.