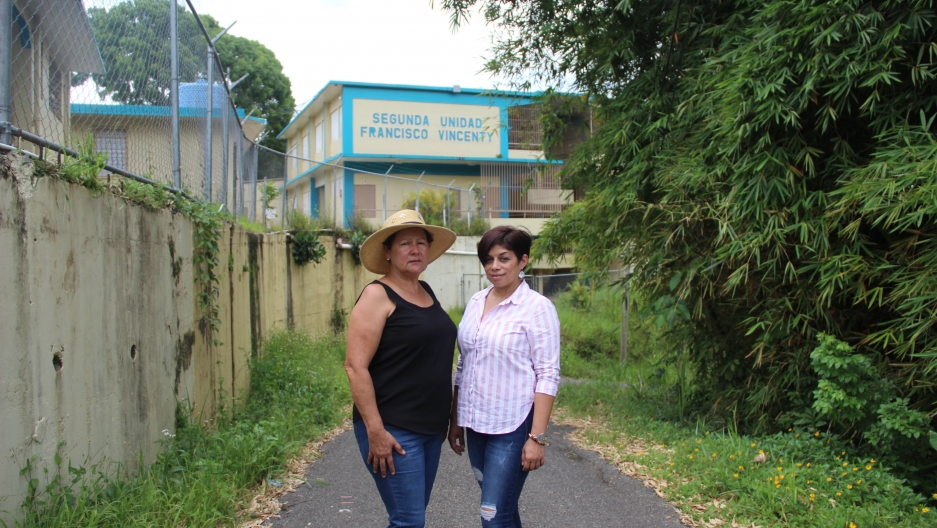 Krys Rodríguez, left, and Jacqueline Pérez in front of the closed school they hope to transform into an agricultural education center.

There’s a dimly lit convenience store in the mountains of western Puerto Rico where an 82-year-old man sits behind the counter ringing up snacks and sodas.

Luis Ruiz, who has watery blue eyes and a white beard, wishes he were somewhere else: outside in the sun, tending the coffee plants he farmed for decades. 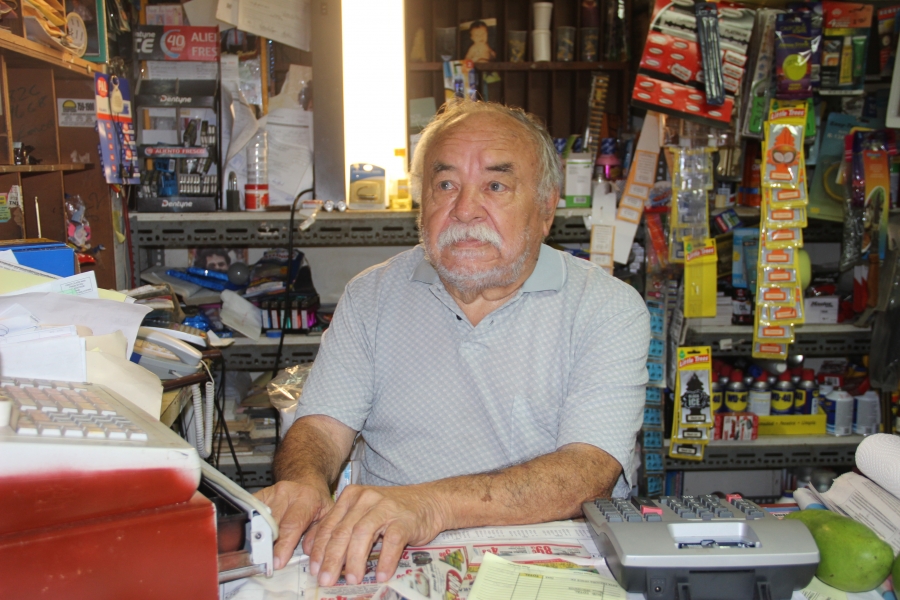 Luis Ruiz at his store in western Puerto Rico. His farm was destroyed by Hurricane Maria and he fears he may lose it to the bank.

Ruiz’s 22 acres stretch down the hill behind his store and into the valley below. His coffee trees look like burnt skeletons. Leaves from dead banana trees lay on the ground, crunching underfoot.

The storm destroyed the fields. It also seems to have destroyed Ruiz’s spirit.

He doesn’t think he can afford to replant, even if he could wait the three to four years it takes for a new crop to produce a harvest.

“I owe the farm to the bank, too. I think I’m going to lose the farm.”

Across Puerto Rico, Hurricane Maria destroyed 85 percent of the island’s harvest. According to Puerto Rico’s Department of Agriculture, crop and agricultural infrastructure losses amounted to more than $2 billion.

Most of the agricultural industry has started up operations again. In July, the island stopped importing bananas because local production of the key crop was meeting market demand again. 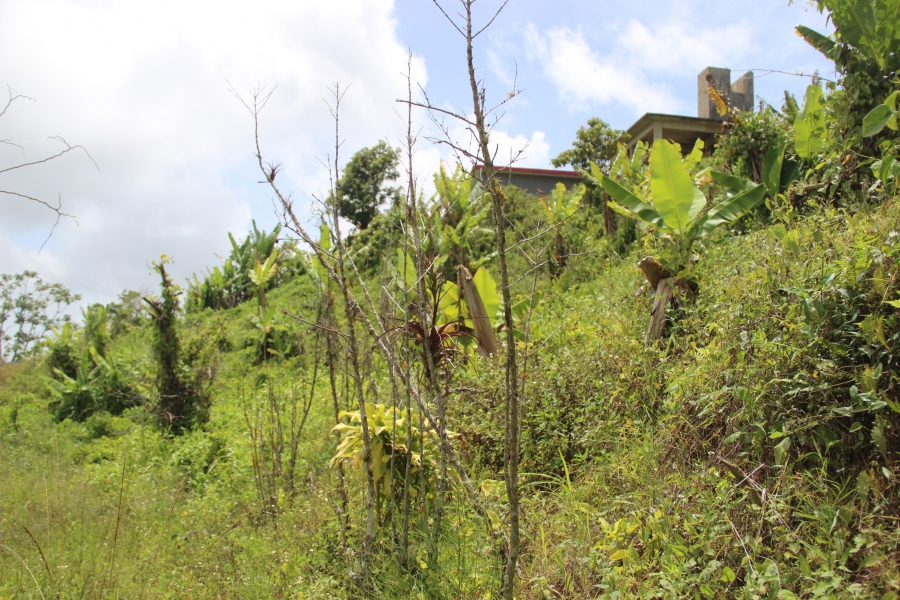 But the coffee industry is a different story. It takes three to four years after planting for a crop to be ready for harvest, so the island’s coffee regions — like Maricao, which is home to Luis Ruiz’s farm — are still badly hurting.

“You see my father’s face, he’s so sad. He’s in a very bad depression,” said Luis Ruiz, Jr. “I don’t like to see my father like that.”

Related: Puerto Rico's public university system is in disarray. But it's not just because of Hurricane Maria.

Even before the hurricane, this rural region of about 5,600 people was hurting. The number of farms dropped by more than two-thirds between 1992 and 2012, the last year for which full census figures are available.

Then Maria came, driving hundreds of thousands of people off the island. (Estimates of how many people left after Maria vary. The most trusted include a range of 114,000 to 213,000, figures published by Hunter College’s Center for Puerto Rican Studies last October, and close to 280,000 from a recent George Washington University study on post-Maria deaths.)

Related: In a Puerto Rico neighborhood still waiting for power, this community kitchen is like ‘therapy'

Many of the residents left abandoned farms. But both government and grassroots efforts aim to stem the flow and strengthen Puerto Rican agriculture, partly so the island is less dependent on food imports.

Transforming an abandoned school into a resource for farmers

Two women who grew up among Maricao’s coffee fields are part of that grassroots movement.

“We have to motivate the farmers to come to the soil again,” said Krys Rodríguez, a retired Army sergeant major who owns Hacienda Doña Patria, a local coffee farm.

She’s working with a handful of local women including Jaqueline Pérez, a civil engineer who sources beans for her cafe and chocolate business, Marikao Coffee and Chocolat, from local farms.

“Right now, there are many people immigrating to the United States,” Pérez said. “And we need to stop it.”

The collective of female coffee farmers, roasters and agronomists led by Pérez and Rodríguez hope to stop that out-migration by building an agricultural education center in Maricao to inspire farmers to replant their crops and teach them how to make more money farming.

“We have to train these people to get better in agriculture, to get a better coffee, specialty coffees,” Rodríguez said.

A neighborhood school in Maricao was closed this summer, one of more than 260 in Puerto Rico shuttered at the end of the school year due to low enrollment after Maria. Around the island, community activists want to give these schools new life. 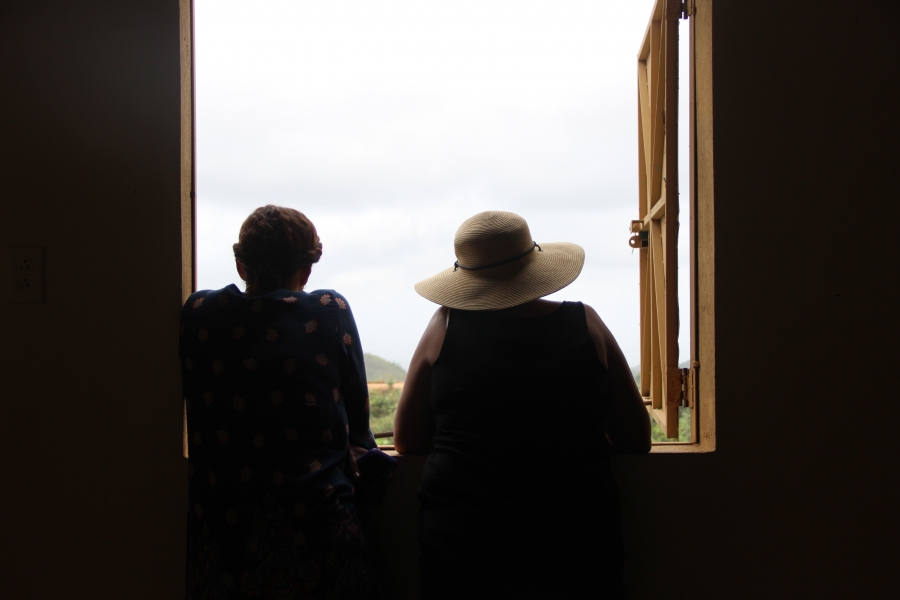 Lourdes Pérez, a coffee farm manager, and Krys Rodríguez look out onto the farm fields of western Puerto Rico from an empty coffee warehouse. They’re among a handful of women trying to transform a local school in Maricao, Puerto Rico.

Rodríguez and Pérez have applied to the Puerto Rican government for permission to transform their neighborhood school (where Pérez was once a student) into a hub for local farmers, complete with office space for two agricultural extension officers, a business incubator, an agro-tourism bed and breakfast and community activities.

“Maricao has the right climate to produce really good-quality coffee,” said Salvador Baiges, an agricultural extension officer at the University of Puerto Rico at Mayagüez who’s supporting the effort. “And because of that, we want our farmers to elevate the quality of the coffee they produce.”

They want Maricao coffee to become almost a name brand, like Kona coffee in Hawaii.

“The only way to do that is with education,” Baiges said. “And this place can serve as a center for education.”

To prove they can operate the school if they are allowed to take it over, Pérez, Rodríguez and their women’s collective need money. They’re trying to raise $150,000 in grants before submitting a final proposal to the Commonwealth government.

Wilfredo Ruiz, who represents coffee processors across the island and is a fourth-generation coffee farmer, supports the women’s project but argues the government also needs to step in to revive the region.

“In terms of economic activity and reasons to live here, it’s the coffee industry,” Ruiz said.

Congress has committed up to $2.4 billion to help US farmers cover crop losses from last year’s hurricanes and wildfires. But Ruiz argues this won’t be enough to save the coffee industry here.

“If it disappears, those of us who live in this region have two options,” Ruiz said. “Either we emigrate to the United States, or we emigrate to big cities, like Bayamón or San Juan.”

Pérez and Rodríguez want to stop that migration in an effort to save their hometown.

“What we’re trying to do is keep the people here,” Rodríguez said.

“If they don’t have opportunities, maybe they’ll leave,” Pérez adds. “But if we offer education and the possibility of new employment, they can stay here."

Back at the Ruiz family farm, things are less optimistic.

Luis Ruiz, Jr. welcomes any jobs that the school transformation project might bring, but he’s not counting on it to help his dad.

Ruiz Jr. moved back to Puerto Rico from Orlando five years ago to care for his aging parents but he doesn’t know how to help right now. Ever the dutiful son, though, he’s looking for hope elsewhere.

“I’m playing lotto every day to see if I win the money to pay the mortgage,” he said.