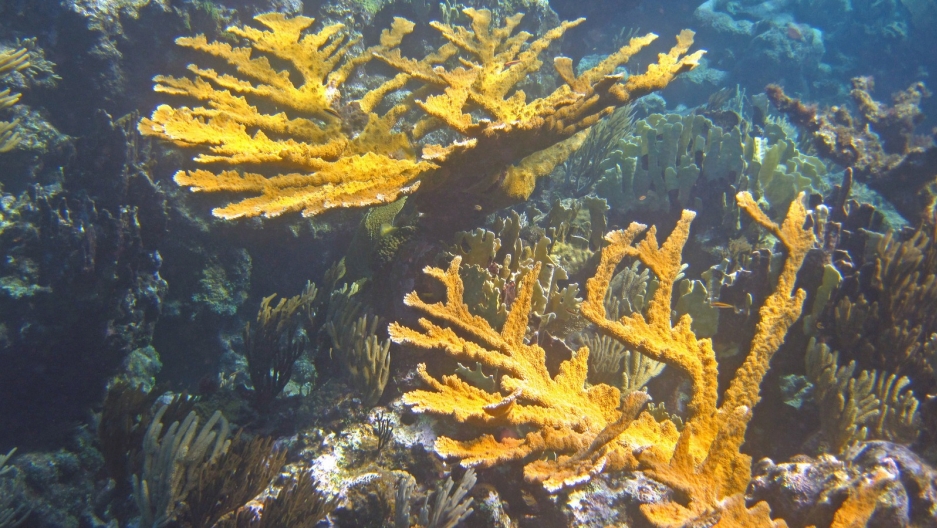 Elkhorn coral is one of the main varieties of coral that workers on the northern coast of Puerto Rico have been able to restore following damage done by Hurricane Maria in 2017.
Credit:

On a beach in Vega Baja on Puerto Rico’s northern coast, Ernesto Vélez Gandía stands next to a fallen loved one.

“We got a lot of love for him,” he says. “We saw him alive, very alive … so we just admire him and remember him. It’s very sentimental. I don’t know, but it’s deep in the heart.”

The deceased in this instance is a dead piece of coral, sitting in shallow, warm water at the entrance to a reef — a likely casualty from a warming ocean. This particular piece of coral was one of the oldest in the reef, he says.

Vélez Gandía and his fellow workers at the environmental nongovernmental organization Grupo V.I.D.A.S. know just about every piece of coral in these parts well, for it is their mission to restore as many of the colonies as they can. A report from the National Oceanic Atmospheric Administration (NOAA) estimates that approximately 10 percent of Puerto Rico’s coral was broken or damaged by Hurricane Maria in 2017, mostly by extremely rough seas and ocean swells.

“The first time we went there after Maria, the reef was destroyed. ... We saw big coral colonies upside down and a lot of dead coral,” says fellow worker Salvador Loreano.

Provided that these coral colonies stay underwater, they have a 20 percent chance of living. When they are attached to larger structures, though, that percentage climbs all the way to 90 percent. The only requirements for reattaching to an existing reef is that the coral be 2 inches in length and 80 percent healthy.

The tools that Grupo V.I.D.A.S. uses for its restoration missions are far from state-of-the-art. Their list of equipment includes brushes to scrape off algae of coral pieces, plastic zip ties to attach small pieces to the larger structures and a pair of pliers to tighten the zip ties and remove any extra plastic. It will take about two to three weeks before the coral grows into the existing reef without needing any support from the zip ties.

‘Day of the Dead, but under the water’

Vélez Gandía says one of the biggest issues confronting the coral — which generally is of the elkhorn (brownish-orange) or bulbous brain (looks just as it is described) varieties in these parts — has been a surge of algae blooms caused by sewage runoff. The coral becomes smothered in algae, resulting in a pale shade of its former self, he says.

“Yeah, those… They look like zombies, right there. ... It’s like Day of the Dead but under the water,” he says.

Other obstacles have included the intentional breaking of the reefs by collectors to sell for placement inside aquariums, ship groundings breaking off large portions of coral and spear fishermen causing damage through their activities. Throw in the topic of ocean acidification and coral bleaching and the climb to save the coral becomes even steeper.

Still, in spite of the challenges, the members of Grupo V.I.D.A.S. have seen some unexpected fruits of their labor — in the form of aquatic life that was presumed to be long gone from the area, including moray eels, scorpion fish, sea cucumbers, puffer fish and sand dollars.

“Our work has given us results,” Loreano says.

The work of Grupo V.I.D.A.S. has largely been financially driven by a million dollars in grant money that was given to Puerto Rico to clean up the island after Maria hit. That funding also has allowed researchers at NOAA, the National Fish and Wildlife Foundation and other independent NGOs to expedite their individual missions to restore wildlife and the surrounding environment back to normal. Although the grant money will soon be no more, workers have collectively been able to reattach approximately 15,000 pieces of coral to existing reefs.

This article is based on reporting done by Bobby Bascomb on PRI’s “Living on Earth” with Steve Curwood.