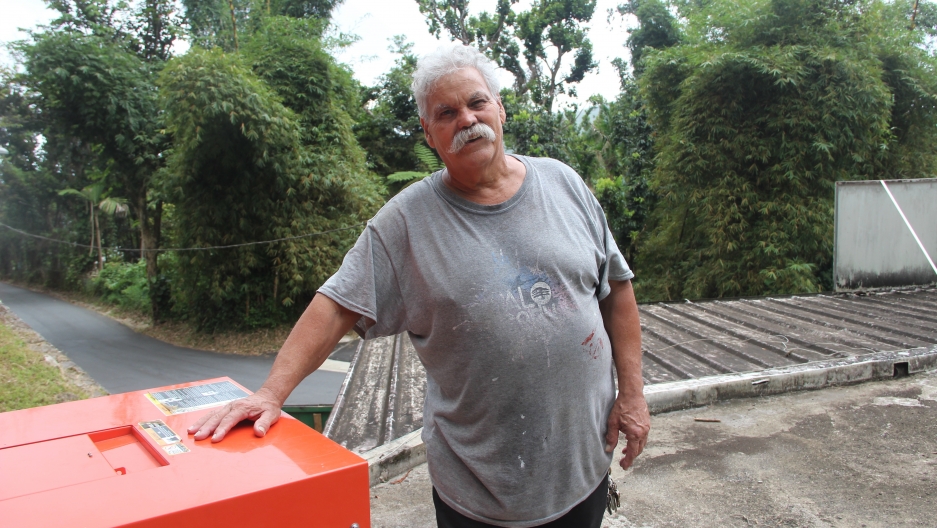 José “Tonty” Saldaña was without electricity from the grid for nearly a year after last fall’s hurricanes. He and his wife used a generator to power their home and businesses in El Yunque National Forest.

José Saldaña is one of the very last of Puerto Rico’s 3.3 million residents to get power back after last fall’s hurricanes.

It was finally restored Friday morning, more than 11.5 months after it first went out and more than a week after the island’s power authority announced electricity had been fully restored across the island.

When The World visited his home and business in El Yunque National Forest in mid-August, Saldaña, who everyone calls Tonty, was clearly agitated about having lived without power for almost a year.

“A week before (Hurricane) Irma we lost service,” Saldaña said from behind the counter of his souvenir shop. “I called the power company then, and I’m still waiting for them to restore power.”

Saldaña’s home and store sit on a main road in the national forest, next door to the restaurant his son runs. Until today, he powered all three properties with a bright orange generator that sits on the roof. It kept the businesses running, but it was an expensive fix.

“I have to pay for diesel, filters and the oil, it’s so expensive,” Saldaña said. The diesel alone cost more than $300 a week, and the need to protect the generator from thieves made Saldaña feel tied to his property. 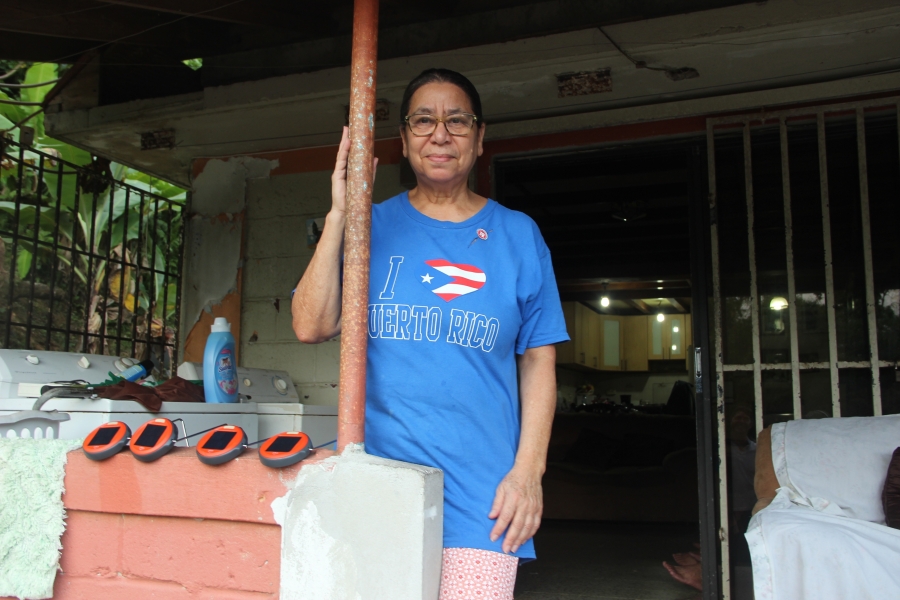 Carmen Roldán stands on her porch near solar lights charging in the sun.

Saldaña turned the generator off at night to save money. That meant the flat-screen TV in the living room stayed dark and Saldaña, his wife Carmen Roldán and any grandkids that might be visiting couldn’t open the fridge until morning.

At night, the family would use solar-powered lights to illuminate the house.

PREPA, the Puerto Rico Electric Power Authority, announced last week that electricity was fully restored across the island, but that announcement didn’t include Saldaña and Roldán’s property.

This home and businesses are within the national forest, and the US Forest Service and PREPA seemed to be at odds over how best to restore power in the densely forested area.

On Friday, a PREPA spokesperson said it finally finished installing a temporary micro-grid generator that will bring Saldaña and Roldán power until contractor Cobra Energy can fully rebuild the grid within the forest.

Even with power almost completely restored, the island’s electrical grid is still weak.

“It’s fragile,” said José Sepúlveda, head of distribution and transmission for PREPA. “If something like Maria comes back to this island, we are going to have problems.”

Sepúlveda said even the weakest type of hurricane would cause widespread blackouts because up until this month PREPA’s restoration efforts has been focused solely on restoring power.

“The mission is just to get power back to the people,” Sepúlveda said, “by any means.”

More than 50,000 new poles and nearly 6,000 miles of conductor wire have been delivered to the island, but restoring the grid as quickly as possible has also meant propping up fallen utility poles and re-stringing snapped lines in a patchwork fix backed by $4.2 billion of FEMA funding.

Now that restoring power is virtually complete, the second, harder part of fixing the grid begins.

“The second part is to have a more resilient, more stable, stronger grid,” Sepúlveda said. 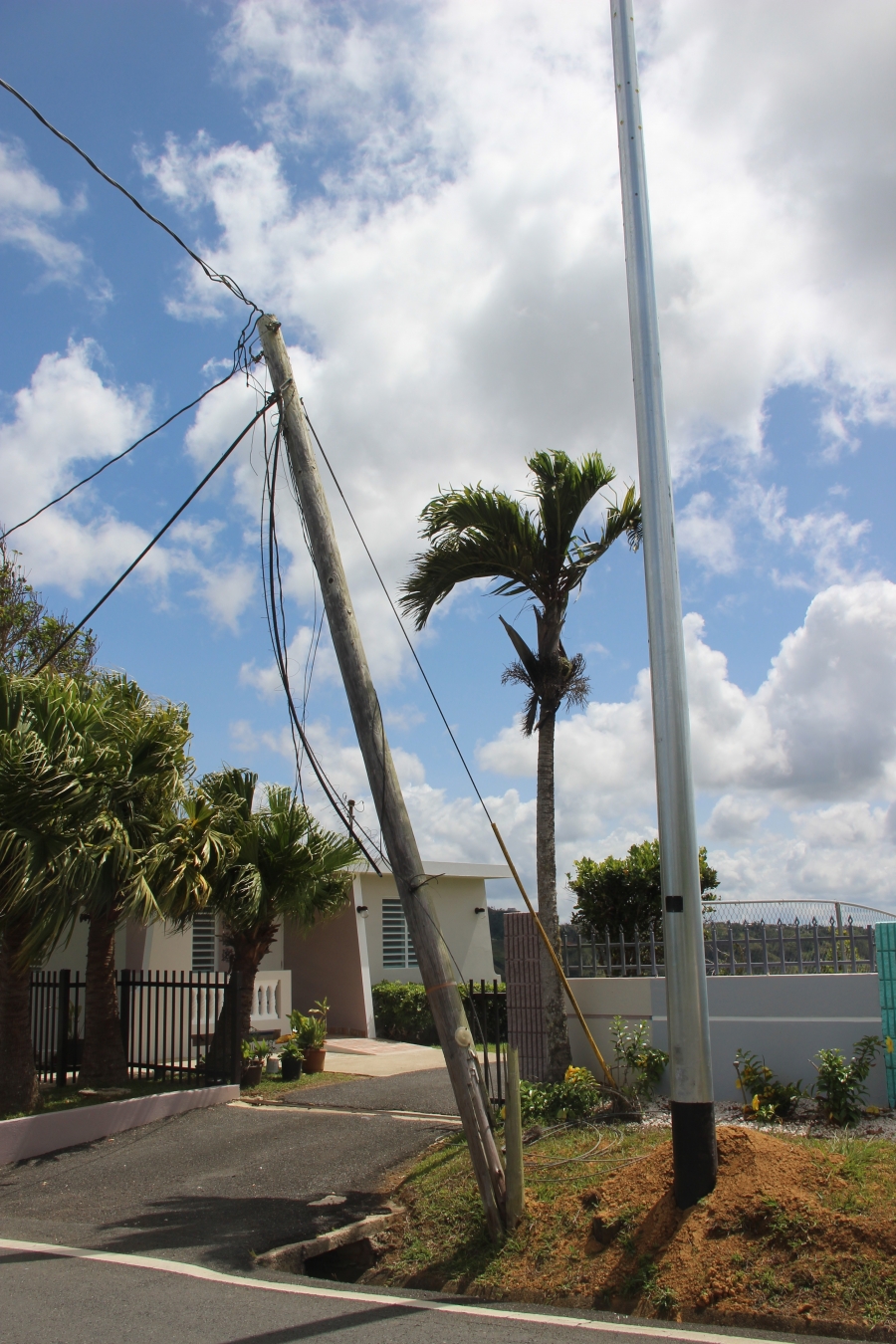 A splintered and leaning pole holds up power lines in the mountain region of Barranquitas.

That will be even more expensive. Puerto Rico Governor Ricardo Rosselló estimated it would cost at least $30 billion in upfront costs and ongoing investment to completely overhaul the grid, including building new generating capacity, rebuilding and upgrading transmission and distribution lines and adding smart-grid technology.

That figure was included in a final recovery plan Rosselló submitted to Congress in mid-August, which put a price tag of $139 billion on the island’s overall recovery efforts.

Steps PREPA is already thinking about include replacing wooden utility poles along the grid’s backbone with steel poles set in concrete and installing lattice towers built to withstand high winds.

In order to get federal funds that are already earmarked for Puerto Rico, PREPA has to take stock of the grid’s weakness and draw up a concrete plan for rebuilding it.

“And that’s what we are doing right now,” Sepúlveda said.

But when asked when that work might actually start, Sepúlveda couldn’t provide a timeline.

“I think the work is going to be started as soon as we have projects ready and money [allocated],” he said. 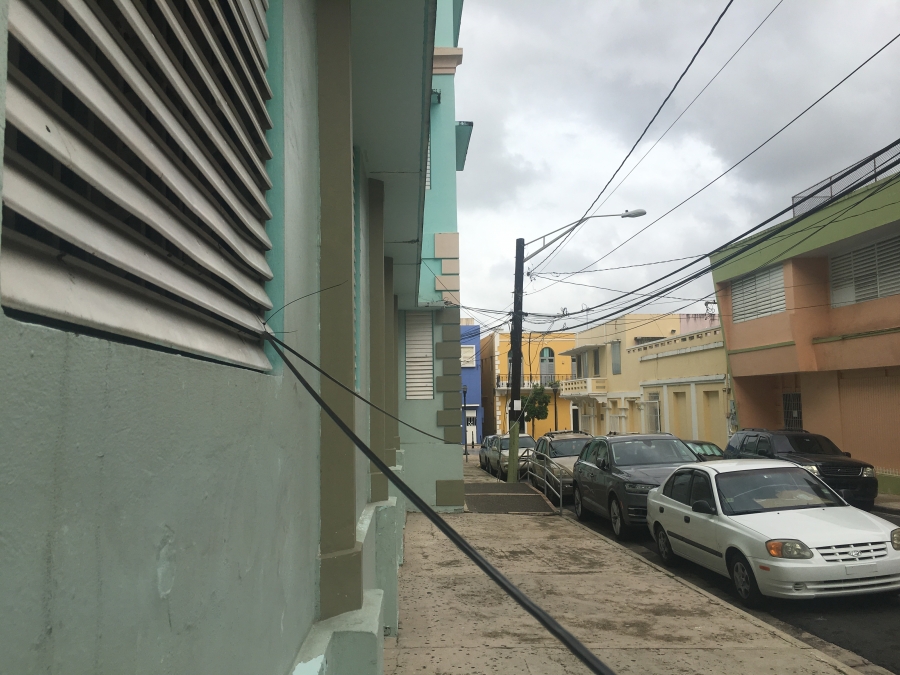 A power line is zip-tied to a shutter in the metropolitan region of Puerto Rico.

PREPA has more than a year to submit its plans for FEMA funding and Mike Byrne, who’s coordinating the federal government’s recovery efforts in Puerto Rico, says overhauling the island’s energy infrastructure will take time.

“Sometimes you really need to invest some time in studying something before you just start to execute,” Byrne says. “This is in no way saying we’re going slow.”

Even though power has been restored, black-outs are still frequent in Puerto Rico.

Everywhere you look you can see signs of the ailing energy infrastructure. Broken power lines dangle into traffic or are tied to shutters or trees to keep them off the ground.

Tangles of power lines weigh down the utility poles they’re strung from.

“I already counted more than 16 different lines going through this mess of wire,” said Juan Rosario, an activist and a former consumer advocate on PREPA’s board, as he pointed to a thick tangle of power and phone lines running along a busy road outside of San Juan.

“We are basically looking at a small example of what the big grid is in Puerto Rico, that [has] been built with not much of a design for many, many decades,” Rosario said.

After years of mismanagement of the grid, many Puerto Ricans, Rosario included, are deeply skeptical about PREPA’s ability to rebuild it stronger, even with the help of contractors it’s hiring to do the work.

“The way (PREPA) is governed is basically the same way it was governed before Maria, and even worse,” Rosario said. “We are going backward in the sense of transparency and reliability of the governance. It’s a mess.” 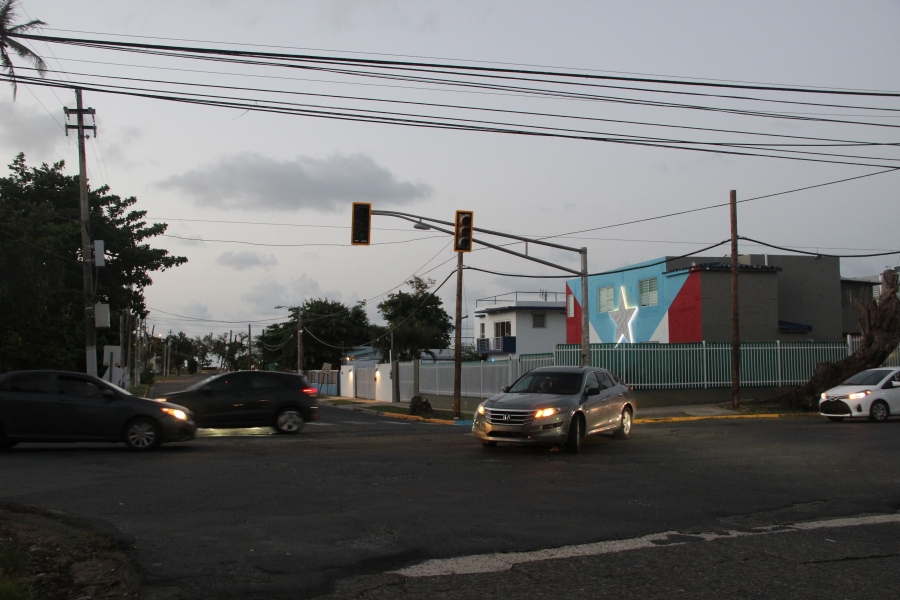 In San Juan, power is fully restored but many traffic lights remain dark.

A surge of interest in rooftop solar

But Rosario argues Hurricane Maria did do one good thing. It revealed how vulnerable the island’s electrical infrastructure is to increasingly powerful storms expected as the climate warms.

“Maria’s not a hurricane, Maria’s a signal of the things to come. So after Maria, I said, ‘this is an opportunity,’” Rosario said. “Maria has created a lot of people who are looking for a new way.”

To Rosario, that new way is based on decentralized renewable energy projects that allow people to get their power without relying on the government. Since Hurricane Maria, he’s been helping people in nearly 20 communities across Puerto Rico install their own solar panels and make energy-efficiency changes.

He sees Maria as having given birth to a whole new attitude about electricity generation in Puerto Rico.

Saldaña, who lives and works in El Yunque National Forest, is one of the people who has lost faith in the grid and is looking for a change.

He’s applied for a loan to buy enough solar panels to power his home and businesses so he can ditch the grid for good.

“PREPA promises and they don’t deliver,” Saldaña says. “I want to forget about them.”

Saldaña says investing in solar power and using his generator as a back-up will be expensive, but the steady supply of electricity — and no longer having to rely on Puerto Rico’s ailing power grid — will be worth it.

Editor's note: The radio version of this story aired on Thursday, August 23, before power had been restored to José Saldaña’s home and businesses. The web version was published on Friday, August 24 after it was restored, and includes an updated figure on FEMA funds dedicated to restoring the grid.