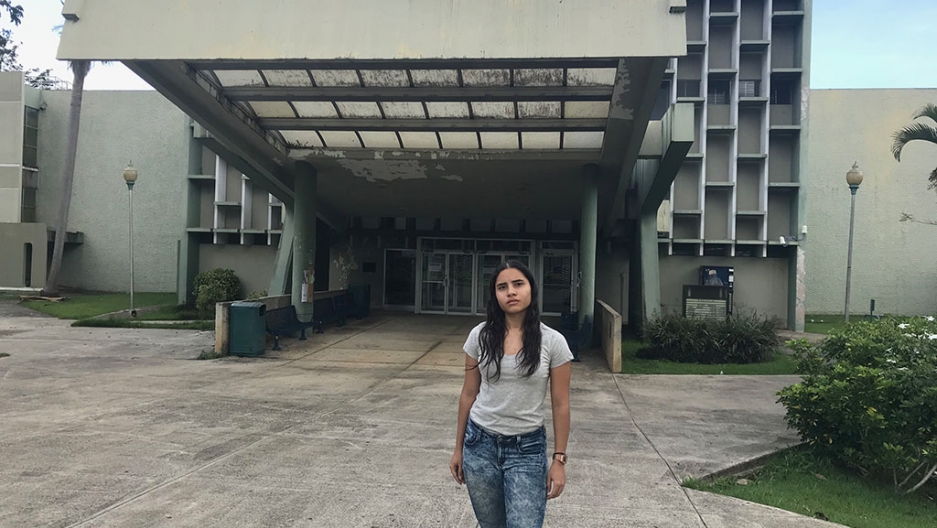 Sophomore Daniela Pérez stands in front of a closed library at the University of Puerto Rico at Mayagüez. But the library has been closed since fall of 2017, before Hurricane Maria hit. The closed library means that student can't access all the resources needed for their studies, and that there are fewer places on campus to sit and work.

Most college students in the US are making plans for the summer. For some of the many Puerto Rican college students who came to the mainland to continue their studies after Hurricane Maria roared through the island last September, this time of the year brings a more complex question — whether to stay or go back home.

Leonardo Núñez, 19, started looking for schools on the US mainland that were accepting transfer students from Puerto Rico in the wake of Maria. His school, the University of Puerto Rico at Rio Piedras, was closed for about 40 days after the hurricane. When it did reopen, few streetlights functioned, making it difficult to commute to campus. Once at school, there was no Wi-Fi connection.

“My apartment didn’t have electrical power sometimes. It was really hard,” says Núñez. “You know, to study in that environment, it’s not easy.”

Núñez ended up at Bowdoin College, a small private school in Maine. They covered tuition, housing, meals, travel and books for one semester. Núñez marveled at how life as a student at Bowdoin differed from back home. He doesn’t have to cook or do dishes. He can concentrate on his studies.

“My brother mentioned that this is like the ideal vacation for me because I really like studying and here, I got everything," says Núñez. "They hand you everything on, like, golden trays. All the food, all the commodities of being here, all the resources.”

But at the end of May, Núñez packed up his bags and went home. What awaits him there is a university system in even more dire condition than when he left it in January.

Almost nine months after the hurricane, many parts of Puerto Rico’s economy, infrastructure and society remain unstable. Higher education hasn’t been spared, creating uncertainty for many students enrolled at each of the 11 campuses that are part of the island’s public university system, the University of Puerto Rico. Some of the problems at the university predate Hurricane Maria. There were frequent strikes and budget cuts. But the structural damages from the hurricane has exacerbated conditions and will cost the university more than $132 million to fix.

Since Maria, a fiscal board overseeing the island’s economy has decided to double the cost of tuition and decrease the university’s budget even further to make up for some of the expenses of the recovery and to counter the country’s debt. This new landscape for public higher education gives young Puerto Ricans, both in the US and on the island, a lot to consider when they go back to school in the fall.

Public institutions, including the University of Puerto Rico, have seen their budgets and services cut since the beginning of the country’s financial crisis in 2015. The US government-appointed fiscal board took control over the country’s finances a year later. The university was slated for a $201 million budget cut.

Hurricane Maria only accelerated what was already happening. To make up for lost revenue, the university is now increasing the price of tuition. Each college credit will be nearly twice as expensive by the start of the fall semester 2018 — from $57 to $115 per credit. Meanwhile, federal and local government contributions will shrink.

Dr. Isar Godreau is the director of the Institute for Building Research Infrastructure and Capacity, at the University of Puerto Rico at Cayey. She is concerned that the diminished budget, along with increasing tuition rates, will affect who can afford to attend the university and what level of education they’ll receive.

“It really is preventing lots of student from finishing their degrees. Those who can manage to pay it are going to take on a lot of debt, and are getting a different quality education. They aren’t paying more to get more,” says Godreau.

Instead, Godreau says, students are paying more for a university that has fewer resources and less faculty. Shrinking administrative staff also means it’ll be harder for the university to fundraise and seek grant money elsewhere to make up for the lack of funding from the Puerto Rican government. 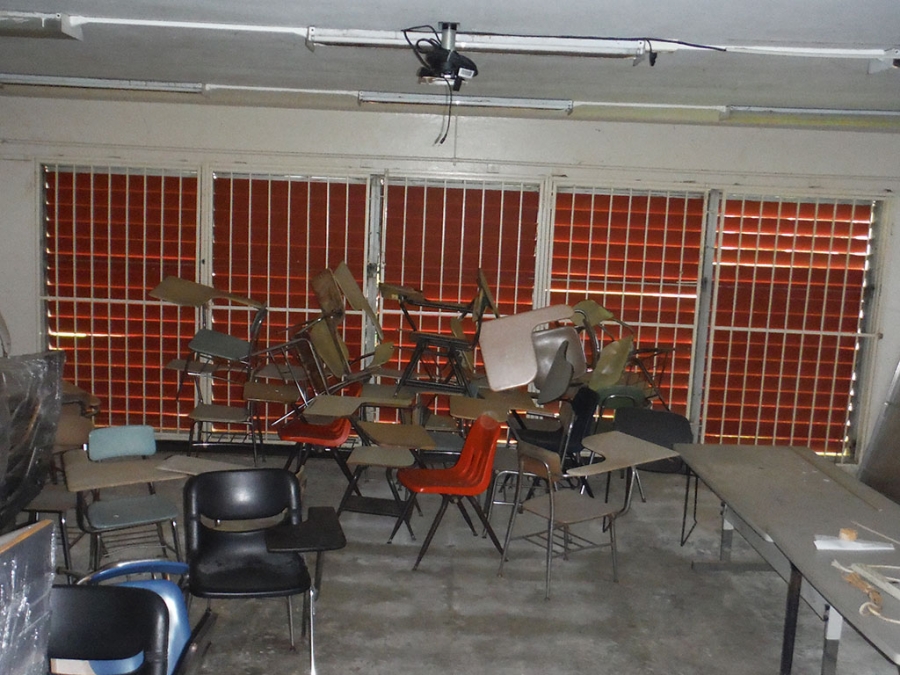 A photo of a classroom at the University of Puerto Rico at Mayagüez taken by graduate student Félix Díaz Méndez. He says his school is "barely functioning" eight months after Hurricane Maria.

Félix Díaz Méndez is a graduate student in the English Department at the University of Puerto Rico at Mayagüez. He’s already seeing changes in the quality of education at his school because there aren’t enough classes being offered. Díaz Méndez is one semester away from finishing his master’s degree in English education but the school hasn’t listed any of classes that he needs. Without them, he can’t graduate on time.

“They’re bringing the whole system down. It’s barely functioning,” says Díaz Méndez. “You have to have your own material. If you want to print something, you have to bring your own paper.”

For Godreau, these recent developments mean that the university is falling short of its legally mandated mission to provide affordable high-quality education to all Puerto Ricans. Affordable postsecondary education is especially critical in a country where close to half of the population lives in poverty and over 70 percent of public university students qualify for some kind of financial aid. Although the cost per credit is significantly lower than at schools in the continental US, Puerto Rican students and their families spend more of their overall income on education.

In North Dakota, the state with the lowest cost of college education at a public university, the average family spends $17,456, or 23.4 percent of their income, on college. In Puerto Rico, the average student pays $14,851 for college — less than in North Dakota — but that's 64.6 percent of average family income, according to a study by the Puerto Rico Department of Education. That number will go up when the price of tuition and other school expenses, like lab fees and getting a student ID card, go up in August.

“I live with my mom. She’s the only one providing for me,” says Daniela Pérez, a sophomore at the University of Puerto Rico at Mayagüez. “It affects me and my mom as well. We’re doing our best to cope with it.” 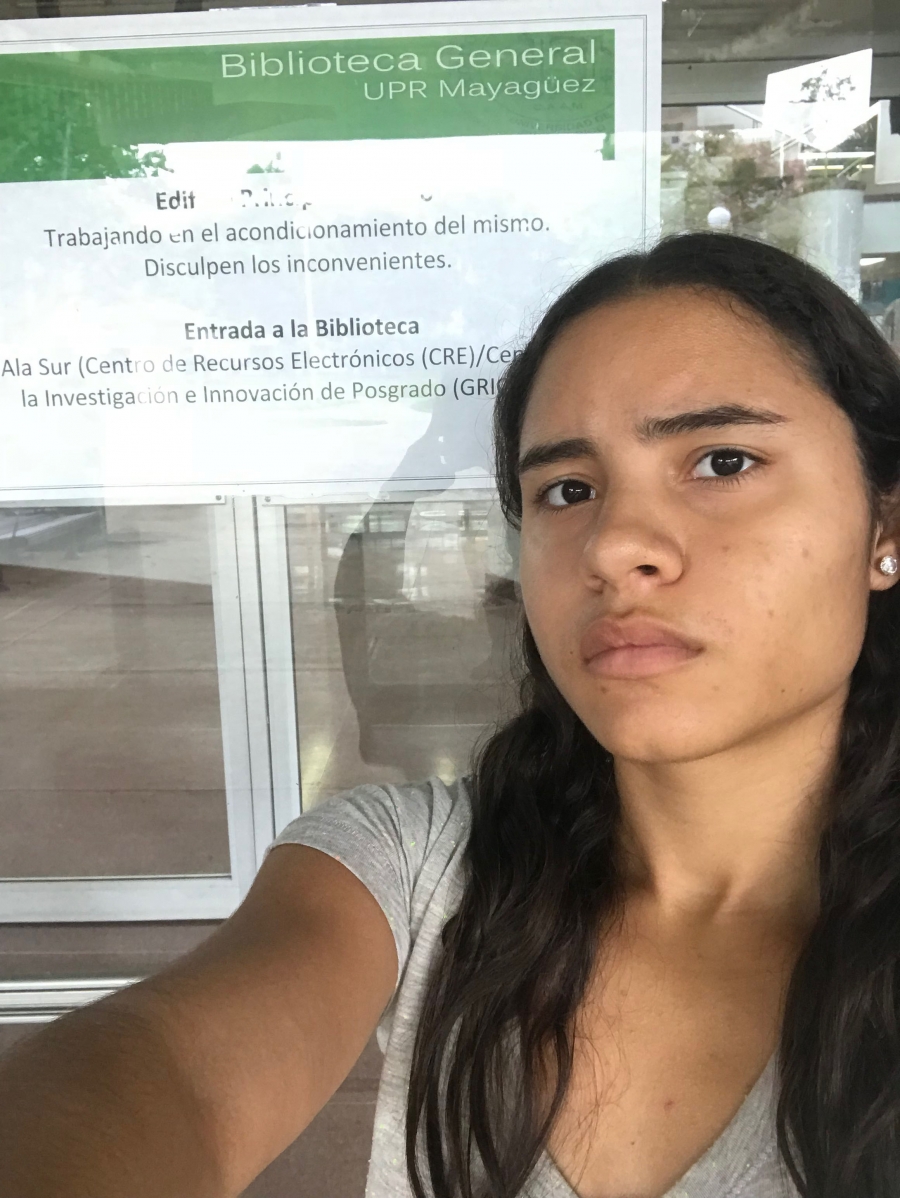 Daniela Pérez is a sophomore at the University of Puerto Rico at Mayagüez. She's taking a heavy load of classes in the summer before tuition costs go up. She takes a selfie in front of her shuttered university library on May 24, 2018, which already closed because of strikes in the fall of 2017, before Hurricane Maria hit the island.

Pérez’s dream is to become a pharmacist and she’s working hard to get all of her requirements done to major in chemistry. Pérez has decided to enroll in summer classes in organic chemistry and math, squeezing in two difficult classes and taking more credits before the cost of tuition goes up. Taking summer classes leaves her only ten days of vacation this summer. This comes after a semester of having classes and exams on the weekends to make up for lost time in the classroom after the strikes and the hurricane. All holidays were also suspended. The tight schedule is exhausting, says Pérez, but she’s determined to push through.

“I can’t stay here longer. The system really isn’t as good as in the States. I want a future and a career,” she says. “I want to be a pharmacist on the mainland at a VA or a Walgreens, or one of those pharmacies.”

Yarimar Bonilla, an anthropology professor at Rutgers University, says that the University of Puerto Rico has long been the country’s main vehicle of upward social mobility. It helps low-income students get an education, leave poverty and enter the middle class. Now, that’s disappearing, she says. She says many recent University of Puerto Rico graduates are having a hard time getting work on the island and are instead being recruited to work in the continental US.

“After the hurricane, lots of US institutions try to help students but they recruit students to come temporarily, and in the end, it furthers the brain drain [for Puerto Rico],” says Bonilla.

The guest programs for Puerto Rican students have not only affected the rate of migration from the island, says Bonilla, they have also changed the amount of funding that is going toward helping students at their home institutions. Colleges and universities in the US that admitted Puerto Rican students have received large portions of the federal aid allocated for the victims of Hurricanes Harvey, Irma and Maria. A New York Times investigation found that only $8.9 million of the $41 million in emergency relief funds paid out by the US Department of Education benefitted higher education in Puerto Rico.

“The money that could have gone to the University of Puerto Rico to rebuild its infrastructure has gone to the schools in the States instead,” says Bonilla.

The history of migration between Puerto Rico and the US is long and complex.

Migration from the island to the mainland increased from 2005 to 2015, during the country’s financial troubles. That flow of people has grown since the hurricane, according to a study from the Center for Puerto Rican Studies at Hunter College, CUNY. This is affecting all schools, from pre-kindergarten to college. And the predicted drop in enrollment during this year’s fall semester has been one of the main arguments that the US-appointed fiscal board has given for cutting funding for Puerto Rico’s public university system.

But there hasn’t yet been any conclusive research on how many public university students actually have left the island. So far, a study from the Puerto Rican Association of University Professors shows that private universities, not public institutions, are experiencing a decline in the number of graduating students. Using the drop in enrollment as a reason for budget cuts is a self-fulfilling prophecy and a step in promoting private institutions over the public university, says Bonilla.

“There’s going to be a drop in enrollment if it costs the same [as private colleges] and the public institutions are under attack.”

For Núñez, the experience of the hurricane and the time spent in Maine at Bowdoin College has been a turning point in his academic career. He’s decided to switch his major from anthropology to education. Núñez says his experience at Bowdoin made him reflect on the problems that plague the public school system in Puerto Rico.

“I have been thinking that not many students in Puerto Rico will have this opportunity, and if I can maybe be a teacher and I can give to them what I have learned from these experiences, that’s what I’d like to do,” he says.