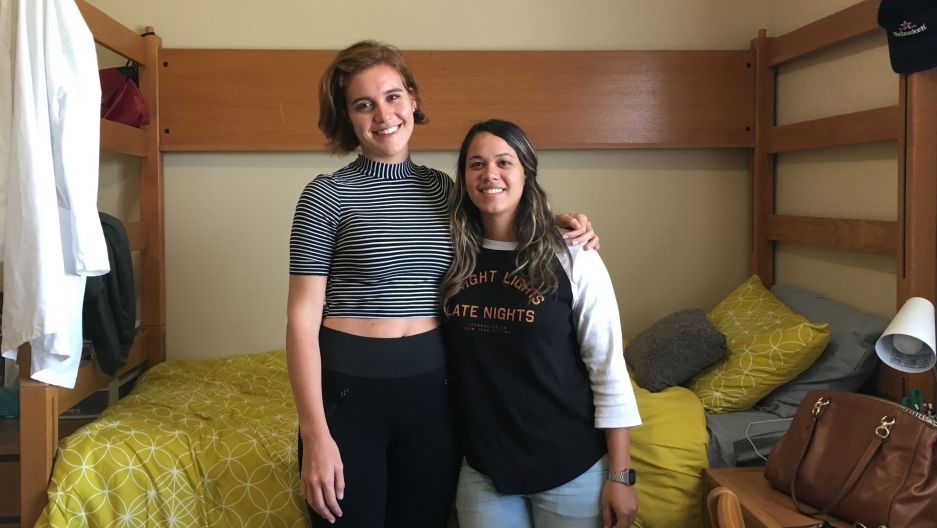 Rosamari Palerm (left) moved to Florida to attend St. Thomas University in Miami Gardens on Sept. 30, 2017, just 10 days after Hurrican Maria touched down on her home town in Puerto Rico. She points to her mini-fridge, towels and a bright yellow bedspread in her dorm room. “All this is new,” she said. Her roomate, Ingrid Decatrel (right), also transferred from a school in Puerto Rico.

The first wave of university students displaced by Hurricane Maria has arrived to study in the mainland US, taking advantage of tuition discounts offered to Puerto Rican students whose home institutions remain shuttered.

“Coming here was a big relief,” says Rosamari Palerm, 23. She was the first student from Puerto Rico to arrive at St. Thomas University, a private Catholic school in Miami Gardens, Florida with over 5,000 students.

The electricity, clean water and cell service available on campus — not to mention college classes — stand in stark contrast to conditions at home. Much of Puerto Rico is still without power a month after the hurricane. Water contamination is widespread. The scope of the disaster there is still not completely understood.

A month ago, Palerm was in her apartment in San Juan with her parents and two older brothers sheltering from Hurricane Maria. They hunkered down in the hallway and listened to the wind crashing into the windows and walls.

“The building would sway, it felt kind of like a boat,” Palerm says.

When the winds died down, the apartment was largely intact. But outside, sewage water flooded the streets, the electric grid was down, and life as Palerm knew it was on hold.

“I worked at a mall and the mall is completely destroyed, so I couldn’t work,” Palerm says.

Classes were suspended at Sacred Heart University where Palerm was a senior biology major. She planned to graduate this academic year and apply to veterinary school, but that seemed unlikely after the hurricane. So when Palerm heard through family on the mainland that St. Thomas University was offering free room and board and tuition discounts to students displaced by the hurricane, she jumped at the chance to transfer.

Palerm moved into her dorm room on the university’s gated campus two weeks ago. The grounds are full of old-growth trees, but inside her dorm room, the walls above her standard-issue bed and desk are bare.

“I literally left with nothing. I just had my clothes,” Palerm says.

She points to her mini-fridge, towels, and a bright yellow bedspread, fresh from Target.

“All this is new,” Palerm says. “Thank God I have a credit card!”

St. Thomas is one of about a dozen private schools in Florida offering discounted tuition and room and board to students displaced by Hurricane Maria.

Florida’s public colleges and universities, along with the State University of New York system, are offering in-state tuition to students from Puerto Rico and the US Virgin Islands. Tulane University in New Orleans, where their own students scattered to other schools in the aftermath of Hurricane Katrina in 2005, will accept displaced students this spring, provided they pay tuition to their home institutions.

Many of these colleges and universities will start accepting students for the spring term. St. Thomas, however, began enrolling students almost immediately, allowing them to join classes mid-term or add on additional credits with a shorter semester that started just a few days ago. Provost Irma Becerra, who grew up in Puerto Rico and lived through Hurricane Andrew in Miami in 1992, felt she had a personal stake in the issue.

“When we saw the devastation in Puerto Rico we needed to jump into action,” said Becerra, who evacuated from her home in Miami for Hurricane Irma in September. 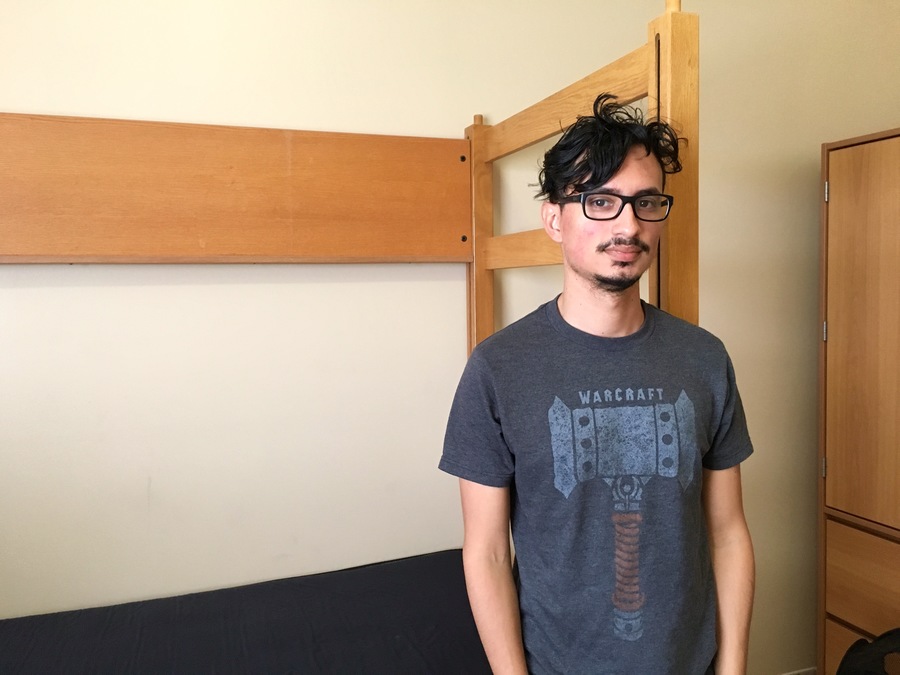 Luis Rodriguez, who is studying for his master’s degree, just moved into his dorm at St. Thomas University in Miami, Florida. On Oct. 10. 2017, he was setting up his room. When he left his home near Carolina, Puerto Rico, his family still didn’t have power.

In the first weeks of October, roughly 50 students like Palerm, from Puerto Rico and the US Virgin Islands, have arrived. Palerm’s neighbor across the hall, Luis Rodriguez, walked into his room with an armful of plastic grocery bags full of toiletries and snacks.

He arrived the day before and took two hot showers in his first night at the dorm.

“It was a relief, because it’s been like a month since I’ve had any air conditioning and hot water,” Rodriguez says. “It’s just amazing.”

This growing contingent of Puerto Rican students eat together in she school’s small dining hall, pulling tables together so they can all sit next to each other.

“I feel like I’m not alone,” says senior psychology major Victoria Angulo, two days after her arrival. “If I say something or if I feel sad, they’ve felt the same way. We support each other.”

But they’re still feeling disconnected from the families they’ve left at home. 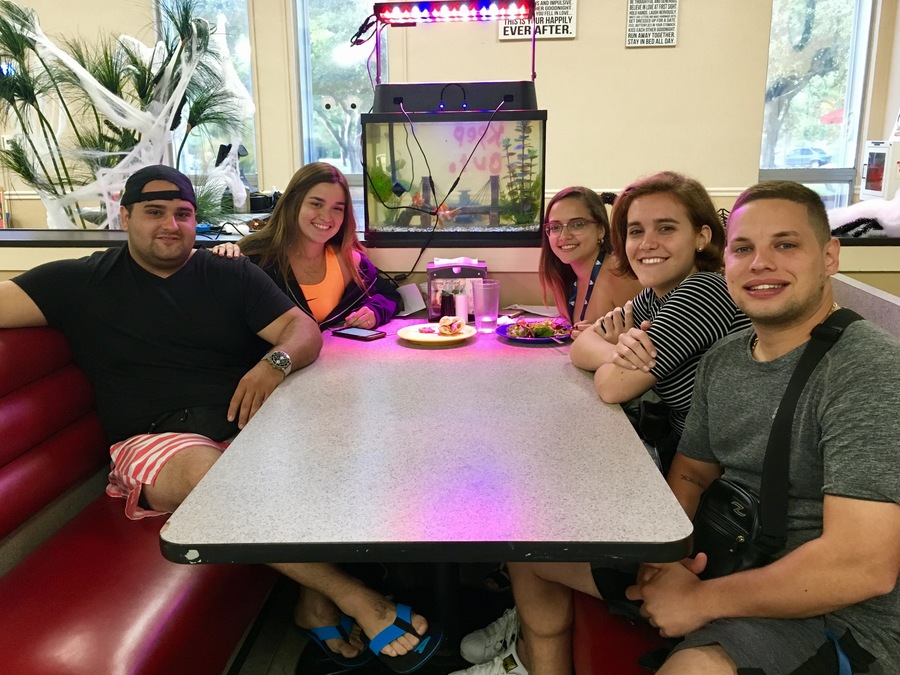 Students after dinner at the dining hall at St. Thomas University in Miami Gardens, Florida on Oct. 10, 2017. Puerto Rican students have transferred to St. Thomas and are finding community with each other.

Cell phone service is still spotty in Puerto Rico, even in San Juan, the largest city on the island. Palerm is never sure if she’ll reach her parents when she calls home. When she does reach them, they tell her there’s still not enough food or water in the grocery stores. The diesel-powered generator in her family’s apartment building, which had been supplying electricity and pumping water to their fifth-floor apartment for four hours a day before she left, is only working three hours a day now.

About 20 percent of the country has power from the electric grid, according to the Puerto Rican government.

“When I wake up, I try to be positive,” says Rosa Nadal, Palerm's mother, in a phone call. “But you get frustrated because when you go out on the street you see there’s nothing happening. You feel trapped in a place that is not moving."

Palerm's two older brothers are also heading to the mainland. The three of them are all of Nadal's children.

“[I’m] sad because I am not here with them,” Nadal says. “But I’m happy at the same time, because I know they’re going to be safe in another place, moving on with their lives. If they’re OK, I’m OK.”

The fact that Palerm’s parents are struggling while she’s pushing forward with her education has not escaped her.

“At first I felt narcissistic because obviously I’m leaving them in the struggle to go better my life,” Palerm says. “But my mom told me, 'This is for your future, this is what we want for you. You don’t say no to this kind of opportunity.'”

And with free room and board at school, there’s a practical upside to leaving an island still in disaster-recovery mode.

“I’m one less person that they have to feed,” Palerm says.

Puerto Rico was already losing population because of its economic challenges before Hurricane Maria. Estimates suggest its population has shrunk by more than 300,000 people since 2010. The devastation wrought by Maria is expected to accelerate that exodus. And the wave of new arrivals to the mainland could be considered environmental migrants because of the role of climate change in making hurricanes more intense.

“At this point we don’t have a good estimate of how many people exactly will move, but I think everyone agrees it’s going to be massive,” says Jorge Duany, anthropology professor at Florida International University. “We’re talking about 350,000 to perhaps half a million.”

Some estimates put the figure closer to a million people. This environmental migration is likely to only make Puerto Rico’s economic problems worse.

“That kind of loss will mean a smaller tax base, less economic activity, fewer incentives to remain — especially for those who can find jobs here,” Duany says. “The other thing we don’t know is how many people will remain here in the [mainland] states, or whether they’ll go back once life returns to normalcy on the island.”

In the short-term, tuition breaks for Puerto Rican students will help them graduate on time and continue on to graduate school, if they choose. But over time, Duany warns, they could exacerbate the island’s brain drain.

For Palerm, the relative permanence of her move to the mainland didn’t sink in until she was at the airport with her mom, waiting in chaotic lines to leave San Juan. Her mother hugged her tightly and started to cry.

“It didn’t hit me [until then],” Palerm says. “I’m probably not going to come back for a while.”

That question of when — or if — Puerto Ricans will return home could also have big implications for the demographics of Florida, a key battleground state in national politics. Many students at St. Thomas say they don’t see a future for themselves on the island anymore.

But Palerm’s family ties hold her tightly, and she says she wants to go back to Puerto Rico eventually.

“[I] don’t know when that is, might be a year, two years, but I want to go back,” Palerm says. “I love my little island. I want to be a part of helping it get better.”