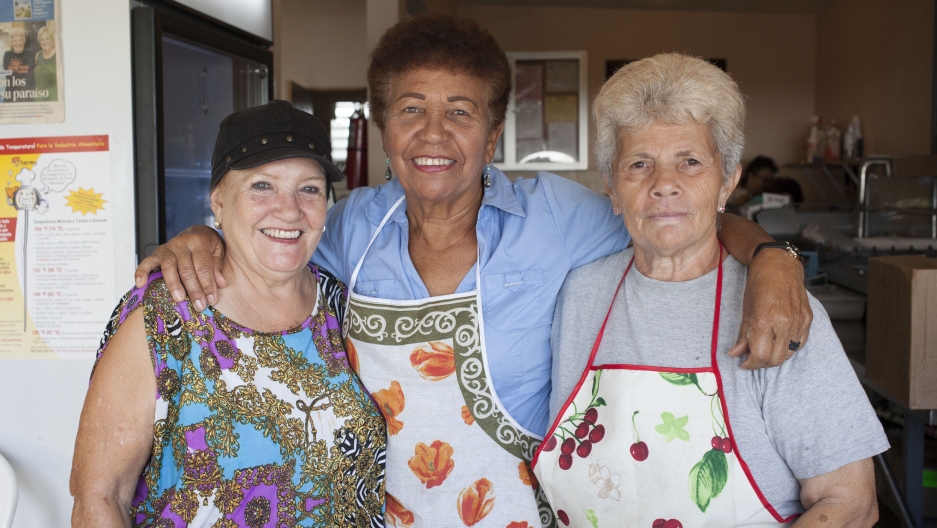 A group of women in the community of Mariana, in Puerto Rico, meet every day to cook for their neighbors. They say after the storm, the work and camaraderie have eased depression.

On a hilltop in eastern Puerto Rico’s Humacao municipality, a handful of women bustled around pans of sizzling oil and fragrant pots of stew. They spooned heaping piles of rice, chicken, chickpeas, fried plantains and salad into Styrofoam containers. At a serving window, one of the women slid the food to waiting customers.

“This is like therapy for us,” said María Laboy.

In September, Hurricane Maria made landfall just south of this community, called Mariana. The storm blew out the power grid, leaving people without electricity and damaging many homes in the region.

“When I went to my house, it was like a tornado went through,” said Laboy. “Water in every place, and trees. We couldn’t get through.”

Others, like Matilde Colón, lost their homes completely. “My world fell apart,” she said. “I was left with nothing.” She fell into a depression.

Across the island, many people struggled with anxiety and feelings of sadness. In the weeks after the hurricane, public health officials warned that Puerto Rico was experiencing a mental health crisis driven by Maria’s devastation. Calls to the suicide hotline skyrocketed, and many people showed signs of post-traumatic stress.

In Mariana, a group of activists, even as they cleaned out their own homes, started to organize. They’d seen community kitchens functioning in other neighborhoods and brought the idea to Mariana. The kitchen came to life a few weeks after the storm, and it supplied much-needed food to locals and comfort to the cooks.

Related: We asked Puerto Ricans about their future plans. Many want to stay and rebuild.

The kitchen, a standalone cement room with commercial ranges and stainless steel sinks, is typically used for an annual festival celebrating breadfruit. Perched on a hill, it looks out onto verdant knolls pocked with houses. After the storm, about seven women — acquaintances and strangers, some of whom came to Mariana to stay with relatives — started showing up to cook every day. At first, the women used generators to power their work. Then, the kitchen was upgraded with donated solar panels and a big battery.

On a hot March afternoon, Laboy wove in and out of the other women working around her. They’re in their 60s, 70s and 80s and have become like sisters, Colón says. Most of the women live alone and lost something during the storm. Their routines — exercise, outings with friends, sewing, some television before bed — have been disrupted.

But they’ve established a new routine. They show up in the kitchen daily with their hair done and eyebrows painted and don colorful aprons.

The workday starts around 8 a.m. The women bring whatever is affordable at the market — some meat, rice, beans — and split up responsibilities. Each woman has a specialty. Even the breadcrumbs for the chicken are made from scratch, Laboy says proudly. At lunch, they start serving.

“We started by bringing food to bedridden people, to people in the neighborhood who were sick,” María Martínez said. That included her own daughter, who broke a leg during the storm.

Community members without power at home started showing up, sometimes hundreds per day, so the women fed them. Then they started feeding volunteers from the mainland who’d arrived to help with various projects. At first, the food was free. Now, they charge a nominal price per plate; volunteers still eat free. Whatever they earn they use to buy food for the next day. ​

On the day I visit, the Salvation Army had dropped off boxes of food and diapers, so the little mountaintop was teeming with people picking up supplies. The community is one of the last on the island to remain without power. Neighbors sat around in small groups, eating and joking.

“Today, I cooked the rice dos veces” — two times — “because too many people today,” Martínez said. She smiled at the feat.

“We get together, instead of being in the home lonely and by yourself and depressed, we just spend the day here,” Laboy said. She says the women laugh, argue and make up.

As the lunch hour wraps up, the women scrub pots. Suddenly, they begin to sing.