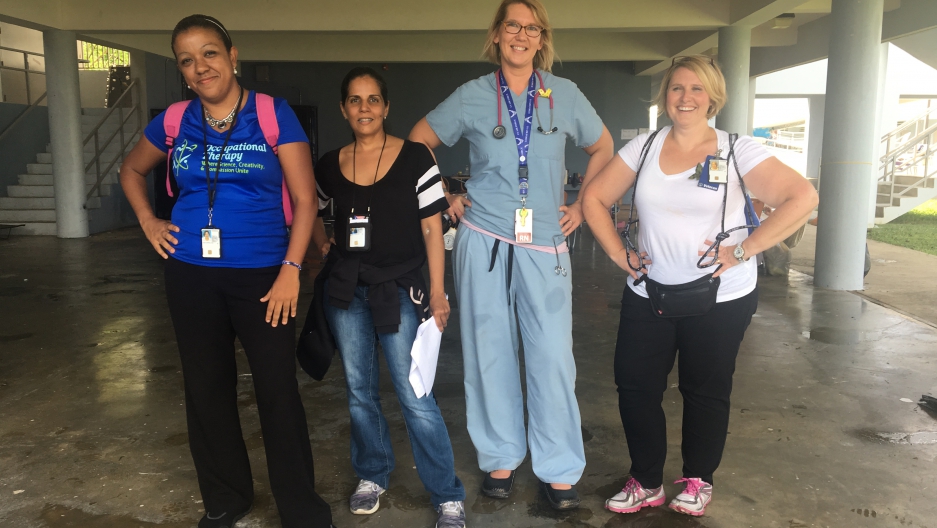 Mia Lind, Ghislaine Rivera, Janine Smalley and Katie Blanker — the VA team — are pictured from left to right. They're trying to find veterans in Puerto Rico who need medical care.

It’s early in the morning, and the entire city of San Juan, Puerto Rico, seems to be gazing at the sky with concern. It looks like rain but the island just can’t handle any more flooding.

On the highway, under the dark, heavy clouds, a small car makes its way through traffic. In it are four women, Ghislaine Rivera, Mia Lind, Janine Smalley and Katie Blanker, with whom I'm spending the day — it's Oct. 5.

Our first stop? A school that’s been turned into a hurricane shelter.

Lind, an occupational therapist for the VA Caribbean Healthcare System in San Juan, goes to the door, asking, “Are there any veterans here?”

Every day since the hurricane hit, she and her team have been roaming from shelter to shelter, looking for veterans who need medical attention. 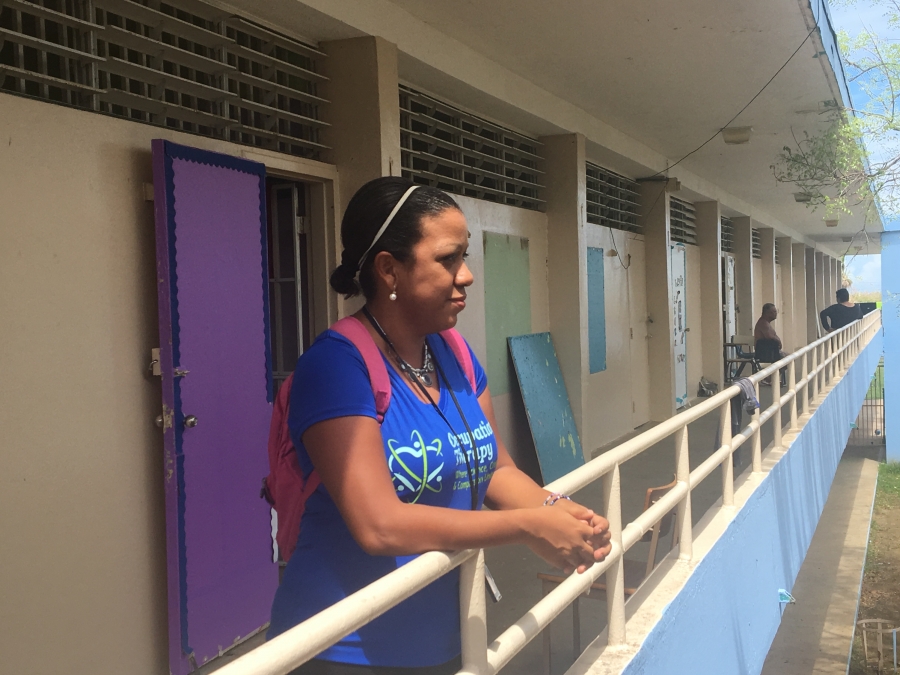 Mia Lind is an occupational therapist for the VA Hospital in San Juan.

There are somewhere around 75,000 US Army veterans living in Puerto Rico. Most served during the Vietnam War. After Hurricane Maria, many are now living in shelters. Thousands of people, not just veterans, have been displaced by the storm, and the shelters are packed.

At the school, a supervisor answers: Yes, there's a veteran here.

The VA team finds 70-year-old Luis Torres lying in bed. His dress shirt is wide open and his baseball cap is flipped backward. His bed is surrounded by piles of clothing and some bags of food. 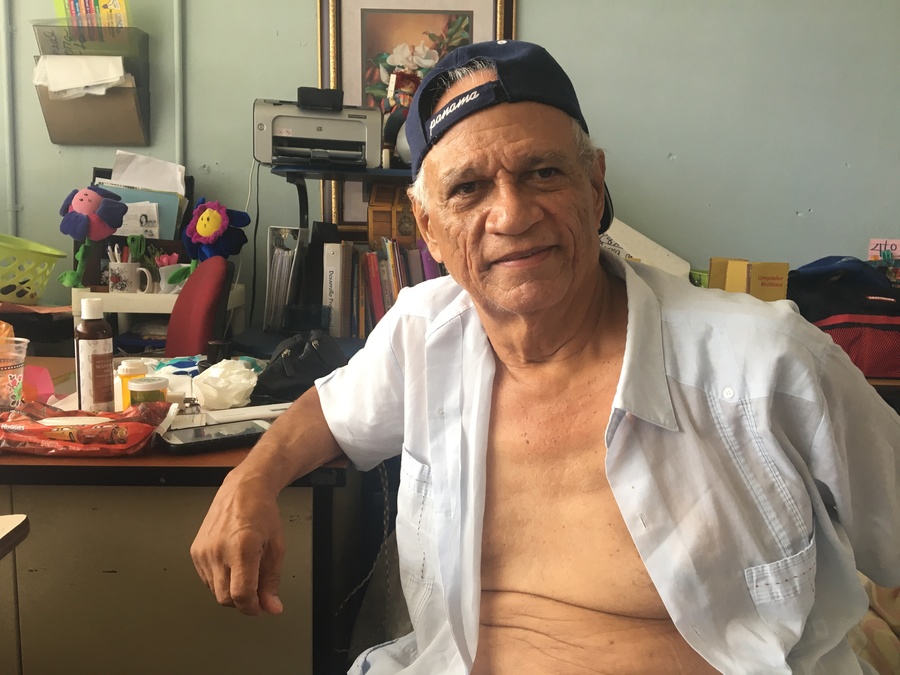 Luis Torres, 70, is a veteran of the Air Force.

The Air Force veteran was honorably discharged; he has his military ID, but the other paperwork was lost in the storm. “My house ... it disappeared,” he says, breaking down in tears.

His teenage son, Andrew Torres, who is also staying here, pulls out his phone to show us pictures of what's left of their house. It’s like the roof and the walls were just plucked out. On the second floor, a toilet stands alone in the open.

Janine Smalley takes Luis Torres's vitals. His blood pressure is 130 over 80, so that’s "perfect," she says, asking, "Do you take any meds?" Smalley is the VA team’s registered nurse and Disaster Emergency Medical Personnel trained by the Federal Emergency Management Agency. She’s here from Cleveland, Ohio. She volunteered to come help. She says when she saw what was happening in Puerto Rico, she asked to be sent here. 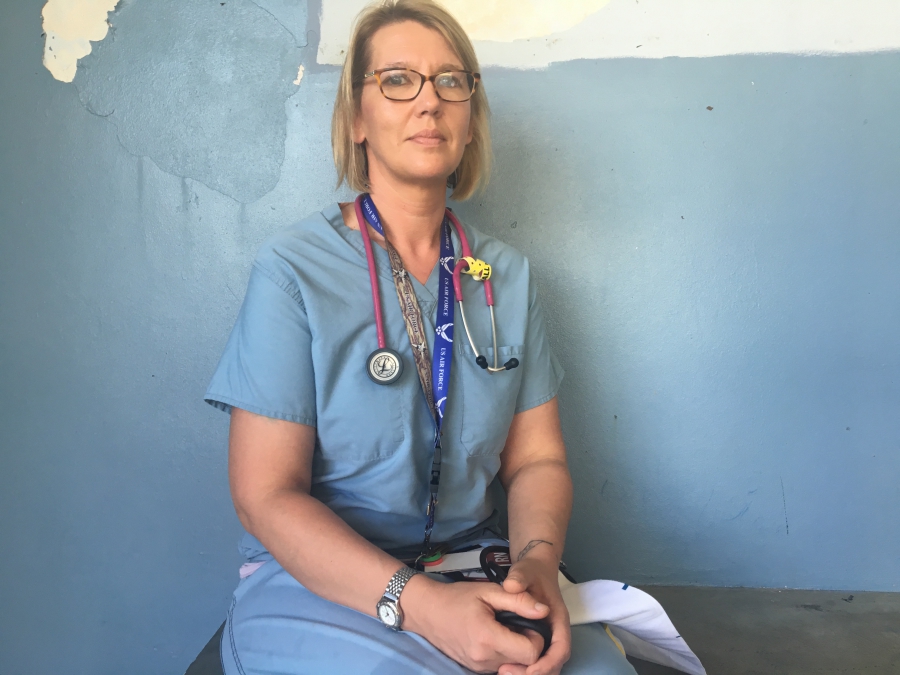 Meanwhile, Katie Blanker, who also volunteered for this assignment, brings Torres toothbrushes, heating pads and food. Blanker is from Stevens Point, Wisconsin. She’s a social worker with the VA and a veteran herself. 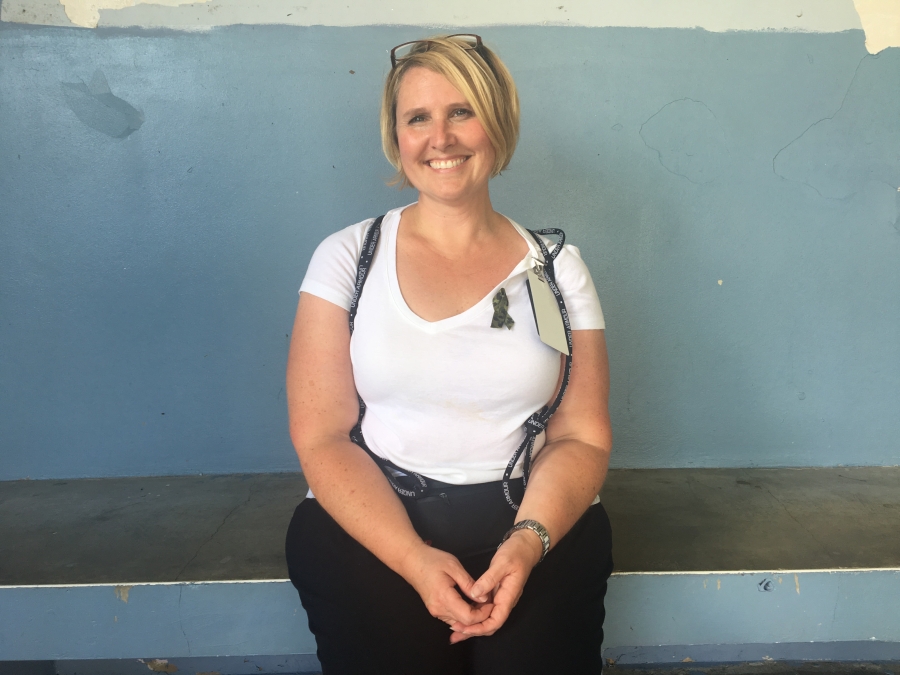 Katie Blanker is working in Puerto Rico as a social worker with the VA. She’s also a veteran. She's originally from Stevens Point, Wisconsin.

Torres cheers up. “Where’s the T-bone steak?” he jokes. At least for a few minutes, the mood has lightened up.

Lind says that she, too, had been thinking about steak, just the day before. There is a meat shortage on the island. "I really want to have a meal for my kids that includes beef. That was my goal. To get my kids not canned food. When you have chaos like this, the only right you have is to stay alive. You stay alive, and you survive," she says.

Lind fights back tears. The others from her team hug her. Then she smiles and announces the next neighborhood they’re heading to: “Let’s go to Rio Grande!”

Let’s go “before we’re all crying. I was hoping to wait till noon to cry again,” Smalley says.

The next shelter is even more packed than the last one.

“May we come in and ask if anyone is a vet?” Lind asks.

A man says there aren't any vets there.

Lind asks the man how he knows.

The man bristles, saying, “I can’t force them to talk to you.”

Lind thanks him, and the team leaves. Later on, in the parking lot, Lind tells me she suspects some shelters just don’t want the VA team coming in. She and her colleagues represent the federal government. And they have to report it if a hurricane shelter isn’t providing enough food and water. Or if it’s overcrowded.

A lot of these shelters are just repurposed schools, places for people to lie down and rest, with no running water or electricity. This is the new normal. Which is why the last shelter we go to takes us a little by surprise.

The team walks right in. There’s a radio blasting pop music. There are kids painting murals. And then there’s Benny Molina.

The residents cheer his name as he sits down for a checkup by nurse Smalley. Molina, 61, is a veteran — “National Guard in Riverdale, New Jersey. Specialized in tanks. Driving the tanks,” he says.

“Benny that’s perfect!” interrupts Smalley. Benny’s blood pressure is normal. He jokingly offers to do pushups — in a while — he just had a big meal. The room erupts in laughter. 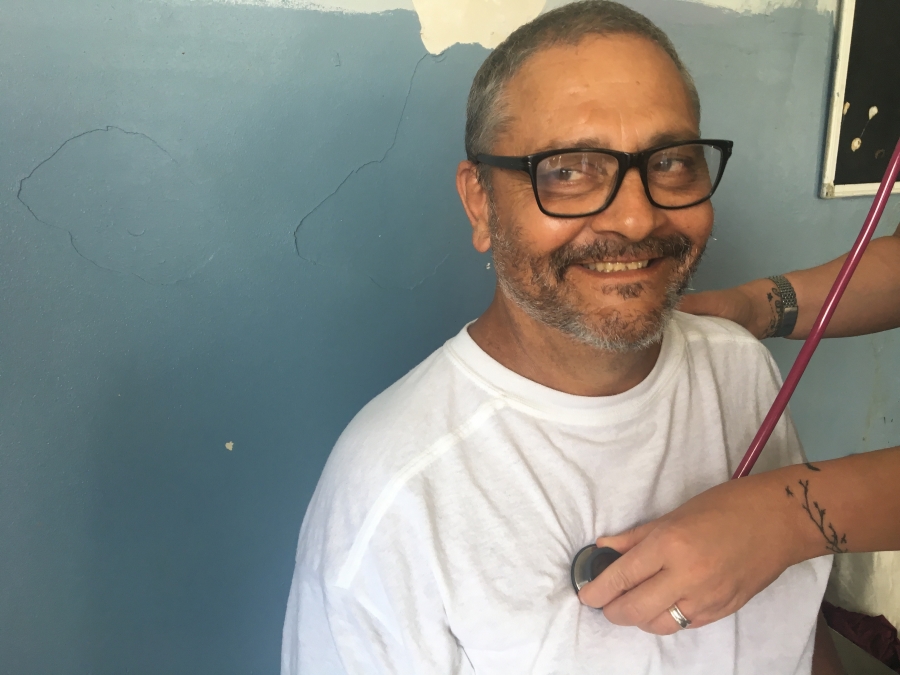 Benny Molina is a 61-year-old veteran. He served in the National Guard in Riverdale, New Jersey.

Ghislaine Rivera, a social worker, asks him what happened to his home. It’s gone. Benny lost everything he owned to the storm. The team offers to give him aid packages, with basic supplies, but he refuses. “Right now, we have food and everything ... but some other people are sleeping on the street and they have nothing to eat.”

As he fills out his paperwork, Smalley and Blanker take a quick break in the shade. They are red from the heat and visibly tired. They’ve come a long way, from Ohio and Wisconsin. But, they say, this is a responsibility they have. All of us do.

“We don’t know them all, but we owe them all,” says Smalley.

“All of the veterans we’re here for served for the United States,” says Blanker. “This is Americans helping Americans. These veterans were stationed in the US, went to war with the US. I think that’s the thing that people forget.”

Follow along with our team from Across Women's Lives for more coverage from Puerto Rico.