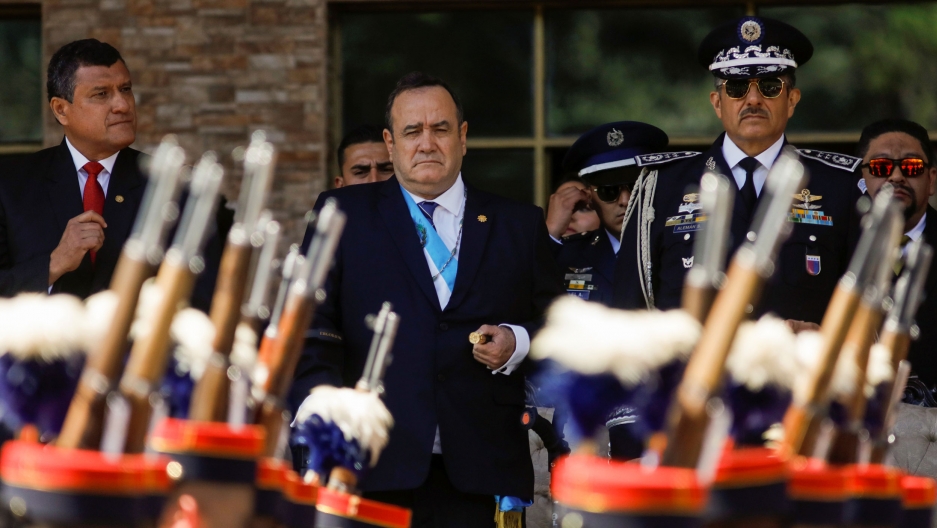 Alejandro Giammattei, a right-wing politician and former doctor and prison director, took office as Guatemala's new president last week. He faces an uphill battle. A deeply unequal country of 16.3 million people, Guatemala is now the top country of origin for migrants and asylum-seekers fleeing violence and poverty who are apprehended at the US southern border.

During his campaign last year, Giammattei proposed to create an “economic wall” of jobs and investment to halt the exodus, and the economy is the first pillar in his four-year plan. He has said he will focus on promoting private-sector investment, improving the business climate, and increasing exports.

“A new phase of growth and prosperity begins,” Giammattei said when he presented the plan two days after taking office.

Guatemala’s new government could bring stability to the country following a turbulent administration riddled with corruption. But analysts see little hope for substantive change in the return of military and private sector elites to power.

Oswaldo Samayoa, a law professor at Guatemala’s public university, does not expect anything new from Giammattei’s government. For him and others, Giammettei’s election represents the return of private-sector elites to positions of power. There have been two such administrations before in recent decades, he said.

“Those who have historically had power in Guatemala are certain economic elites who took control of many natural resources,” Samayoa told The World.

The political influence of the country’s economic elites is constant, but they have only occasionally been directly in control of the public administration, he said. Giammattei made it clear this would be one of those occasions when he appointed a former president of CACIF, the country’s powerful private-sector umbrella organization, as Minister of the Economy.

“I don’t think we’re going to see much evolution from what the state of Guatemala was 15 years ago,” said Samayoa, though he anticipates a somewhat more transparent administration with at least an appearance of openness to dialogue.

Giammattei’s predecessor, Jimmy Morales, set the country even further back with regard to rule of law, experts say. Facing accusations of corruption, Morales and his allies attacked critics, defied Constitutional Court rulings, and shut down CICIG, a UN-backed commission prosecuting criminal networks with deep roots in government.

Giammattei promises zero tolerance for corruption — but so did Morales.

Related: Guatemala shut down its anti-corruption commission. Now its people worry about impunity

“The change in government does not necessarily indicate a change of direction,” says Iduvina Hernández Batres, director of the Association for the Promotion and Study of Security in Democracy.

“All of Jimmy Morales’ actions were possible because they had the support of economic, military and political elites committed to impunity,” she said.

Morales also signed a controversial asylum cooperation agreement last year that allows the US to send third-country asylum-seekers to Guatemala. To date, more than 150 Hondurans and Salvadorans have been sent to Guatemala under the agreement.

Giammattei has reserved judgment on the matter until his team has a chance to analyze the agreement and annex documents withheld by Morales during the transition period. Giammattei has said he may renegotiate the deal, but he is not expected to fundamentally alter it.

The future of the asylum deal remains to be seen, but there is little doubt Guatemala will remain a key US ally in the region. Giammattei’s government has already signed a memorandum of understanding with the US International Development Finance Corporation, DFC, for up to $1 billion in private-sector investment in Guatemala over the next three years.

The funds are part of the US government’s Growth in the Americas initiative, better known by its Spanish name, América Crece. Expanded in December 2019, the initiative will pursue bilateral agreements to finance private-sector investment in energy and infrastructure projects throughout Latin America and the Caribbean.

Giammattei may move the economy forward, but many see his plans to increase military involvement in domestic security and civilian agencies as a concerning setback.

More than 200,000 people, most of them Indigenous Mayan civilians, were killed over the course of a 36-year civil war between the army and leftist guerrilla forces. State actors committed genocide in four regions of the country, according to a UN-backed truth commission.

Giammattei appointed a former conflict-era military official as his Minister of the Interior, the agency in charge of the civilian police, immigration and prisons. Human rights advocates in Guatemala oppose appointments of ex-military officials to oversee civilian security forces, and Édgar Godoy’s was no exception.

“That was a profoundly unpleasant surprise,” says Brenda Hernández, a longtime social movement activist. “That was the sign that we are returning to dark times.”

What’s more, Giammattei has pledged to strengthen military and police forces, and his government plans to propose legislation to designate street gangs as terrorist groups and gang members as terrorists. Due to rampant insecurity, the idea likely boosted his support during the election, but it has also generated alarm.

“It seems a new process of construction of internal enemies is coming,” said Samayoa, alluding to the worst era of war crimes, when Mayan civilians were seen as the internal enemy by the military.

The most likely outcome of labeling ill-defined groups, largely comprised of youth, as terrorists is that security forces become agents of terror to wipe people out, said Samayoa. He hopes the international community will work with the new government to pursue alternate strategies to address crime and insecurity.

Hernández Batres, the Association for the Promotion and Study of Security in Democracy director, has been raising concerns about the human rights implications of Giammattei’s proposals since the campaign last year.

“There are not many expectations of the new government,” she said. “I think it is going to be more of the same, but with a touch more authoritarianism.”