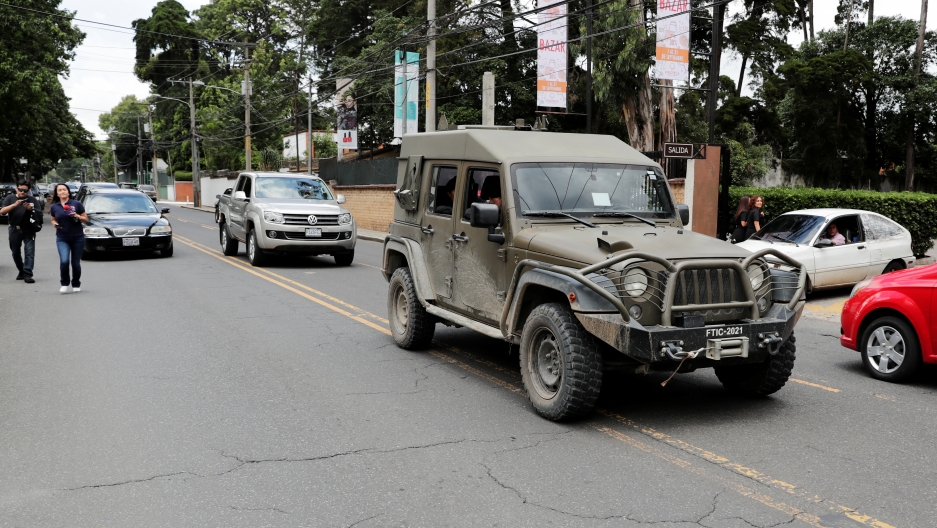 Guatemalan soldiers patrol around the headquarters of the International Commission Against Impunity in Guatemala (CICIG) in a military vehicle donated by the US government, in Guatemala City.

Democratic Rep. Norma Torres of California is the only member of Congress who was born in Central America.

The Guatemalan-born lawmaker has introduced legislation seeking ways to enact sanctions against government corruption in the Central American countries where people are fleeing for the US — Honduras, Guatemala and El Salvador.

Last summer, Torres and other members of the House Appropriations and Rules Committee called on the US State Department to provide lawmakers with a list of corrupt government officials in the Northern Triangle. When the list came back earlier this month, Torres says that many names were missing.

"Frankly, the list was a sham," Torres said. "It was a sham because the names that were included on that list are people that have already been indicted or arrested. That is not what Congress asked for. So, by covering it up, by not producing a full list of corrupt elected officials within the Northern Triangle region of Central America, they are in essence, involved in a cover-up. A cover-up — that is the reason why so many people are fleeing the country."

She spoke with The World's host Marco Werman about the list and her anti-corruption campaign.

Marco Werman: What would this list be covering up?

Norma Torres: The list would be covering up elected officials such as members of the parliament within these countries that are involved in narco-trafficking. For example, we have a Honduran president whose brother was arrested for being a narco-trafficker. He was indicted for being a narco-trafficker. That is someone that I expected to be on the list, among other people that I'd rather not share openly. The State Department has full knowledge of who these people are and that is what Congress asked of them to supply, but they did not.

So, you're certain that there are more names that ought to be on this list. Do you think the list is intentionally incomplete, and if so, why?

I think it's intentionally incomplete, and the reason why I think that is because in my subcommittee, when I began to question Secretary Mike Pompeo on this, there was a pause and he refused to answer that question openly. What other information do they have that could be available, even in a classified setting? The bottom line is that the situation in our southern border is critical. The reason for that is because we have provided no political support for UN organizations such as CICIG (Comisión Internacional contra la Impunidad en Guatemala, or International Commission Against Impunity), that have been tasked with investigating major issues of public corruption in Guatemala and in Honduras. We looked the other way when President Hernández was reelected in an election that had a lot of problems and was a fraudulent reelection.

Did you ever get to sit down with Secretary Pompeo and did he give you the information that you wanted?

Not yet. My office is following up with him now, and we're trying to get a classified briefing from him.

At the same time that you're pushing the anti-corruption campaign in Central America, the Trump administration is cutting off funds to Guatemala as well as El Salvador and Honduras as punishment for not doing more to, as the White House claims, stop migrants from fleeing to the US. Are you worried that having a full list of corrupt officials in these countries could add weight to the White House argument that these funds ought to be cut?

We need to stop sending them military equipment, and we need to stop training military officials and police officers. I support cutting that assistance. What I do not support, and I think that we are headed in the wrong direction, is cutting humanitarian aid. On the issue of the military training military personnel, I'm very concerned about that and very concerned about sending military equipment like the jeeps that we gave them last year. On Aug. 31 of 2018, in Guatemala, they utilized those jeeps to intimidate our US Embassy in Guatemala and to intimidate the UN personnel at the CICIG offices. That's not acceptable. And what did the Trump administration do after that? Four weeks later they sent four more vehicles.