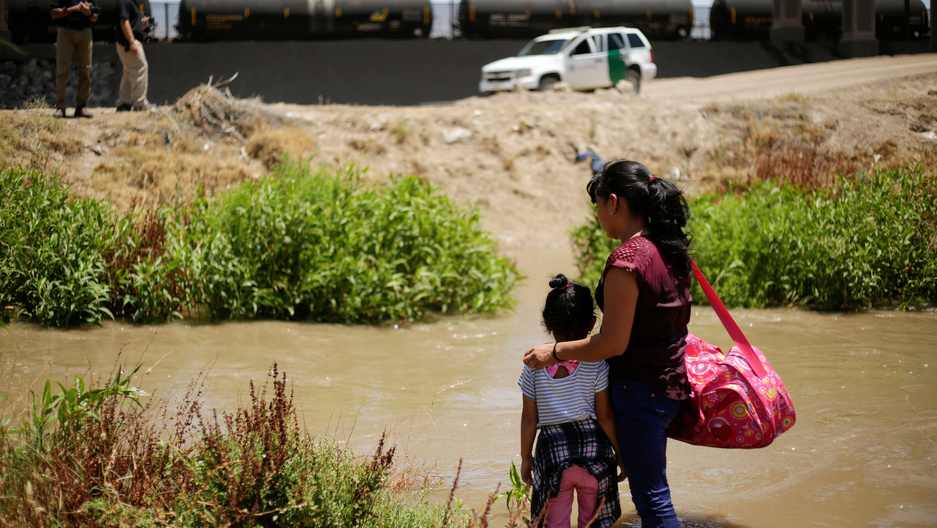 Migrants from Guatemala are seen on the banks of the Río Bravo river before crossing illegally into the United States to turn themselves in to request asylum in El Paso, Texas, as seen from Ciudad Juarez, Mexico, on June 11, 2019.

US immigration officials have already effectively barred most migrants from seeking asylum in the United States. Now, a series of bilateral agreements with Guatemala, El Salvador, and, as of last week, Honduras, is further undermining legal pathways to the US, by cutting off access to the asylum system long before asylum-seekers ever reach the southern border.

The three deals would allow the US to return asylum-seekers to countries they traversed en route to the US. They would shift the burden of stopping asylum-seekers from reaching the US onto the very region from which most of them are fleeing.

Operational details have not yet been released. For now, they’re essentially promises to devise concrete plans in the near future. “The Parties shall develop standard operating procedures to assist in the implementation of this Agreement,” according to the bare-bones, six-page text of the Guatemala and El Salvador deals, which are nearly identical.

But if the deals take effect, they would slam the door on most asylum-seekers.

Under the deal terms, the three Central American countries, which form a region known as the Northern Triangle, would take in any asylum-seekers the US sent back there — so long as they are not citizens of those countries. For example, Hondurans cannot be sent back to Honduras, as that could violate the international-law principle of non-refoulement, in which nations may not forcibly return refugees or asylum-seekers to countries where they may be subject to persecution. Unaccompanied minors are also exempt from the deals.

Related: US leads global 'race to the bottom' in shutting door on refugees and asylum-seekers

The bilateral deals are the latest front in the Trump administration’s all-out war on asylum-seekers who have arrived from Central America over the past year. For the US, the deals are like a fortification, shielding the country from taking responsibility for people seeking international protection. They add yet another line of defense to other, drastic measures the US has recently taken — namely, its Migrant Protection Protocols, better known as “remain in Mexico,” which came into force in January, along with a new asylum rule that essentially blocks Central Americans from claiming asylum at the southern border. Last month, the Supreme Court allowed that rule, known as the “asylum ban,” to go into effect temporarily, until a lawsuit on the matter winds through the courts.

The bilateral agreements mirror an international trend in which powerful countries in the global north, intent on stemming migration from the global south, are pursuing deals with transit countries in order to limit migrants’ right to asylum. The European Union, for example, pursued a similar, controversial deal with Turkey in 2016 to force an end to the European refugee crisis.

At a conference at the United Nations last week, President Donald Trump said the asylum deals, along with Mexico’s own crackdown on migrants “will make a tremendous difference at our southern border.”

Human rights advocates, meanwhile, have decried the agreements as dangerous violations of asylum-seekers’ rights and threats to their safety: People could be back to some of the world’s most dangerous countries, where they would face high levels of violence, crime, corruption and poverty.

“For asylum-seekers, these deals would be devastating. Many people are fleeing from the situations that exist exactly in these countries.”

“For asylum-seekers, these deals would be devastating,” said Aaron Reichlin-Melnick, a policy analyst at the American Immigration Council in Washington, DC. “Many people are fleeing from the situations that exist exactly in these countries.”

The deals hold Honduras, Guatemala and El Salvador responsible for assessing migrants’ claims through their own asylum systems. But all three countries are extremely ill-equipped to handle an influx of asylum applications. El Salvador, for its part, employs a single asylum officer, according to Salvadoran newspaper El Faro, and only 49 asylum claims have been approved “in recent years,” the paper reported.

“The US is not taking into account burden-sharing based on the countries’ capacity to handle asylum applications,” said Cristobal Ramón, a senior immigration policy analyst at the Bipartisan Policy Center. “There’s no recognition that future migrant flows will make it difficult for these countries to fulfill their end of the deal.”

In that sense, asylum-seekers could effectively be cut off from accessing asylum anywhere if they’re sent back from the US. In the El Salvador and Guatemalan deals, the US promises to “cooperate to strengthen” their “institutional capacities.” (The text of the Honduran deal has not yet been made public.) But it’s safe to say all three countries have a long way to go before they could assess the volume of claims the US could be redirecting their way — which could reach into the tens of thousands, judging by the number who have arrived at the US-Mexico border over the past year. Even Mexico, a much larger country, is struggling to care for some 50,000 migrants the US has sent back under its remain in Mexico policy, under which asylum-seekers are sent back to Mexico and ordered back to the US for their court dates.

The deals resemble “safe third-country” agreements, or bilateral deals where one country may prevent individuals arriving at its ports of entry from applying for asylum on the basis that they could have applied for and received international protection in another country they traversed. The “safe country” designation is not necessarily about safety, Ramon said, but rather about whether they’d have access to a full and fair asylum system. The US has tried to pursue “safe third-country” deals with Mexico and Guatemala, but more recently it has avoided the phrase with regard to the Northern Triangle — likely because the rarely used designation is usually reserved for countries with fully functioning asylum systems. (The US actually does have one safe third-country agreement, with Canada.)

But whether the US calls it a safe third-country deal is largely irrelevant, Reichlin-Melnick said.

“Whether they call them safe third-country deals or not, the end effect is the same,” he said.

Similar bilateral deals include the agreement between the European Union with Turkey in 2016 to force an end to the European refugee crisis. For every refugee being returned from Greece to Turkey, the EU promised to resettle someone inside the bloc. But few have actually been returned to Turkey due to the cases’ high appeal rates in Greece and concerns about asylum-seekers’ safety in Turkey.  And Australia has signed controversial pacts with two Pacific islands, Manus and Nauru, to operate offshore processing centers for asylum-seekers who attempt to reach Australia by boat — an arrangement Nauru’s former president has called a “deal with the devil.”

“All these deals are all part and parcel of the same thing, which is to push your borders out — in the US case, first to Mexico and all the way to Honduras.”

“All these deals are all part and parcel of the same thing, which is to push your borders out — in the US case, first to Mexico and all the way to Honduras,” said Demetrios Papademetriou, a distinguished trans-Atlantic fellow and co-founder of the Migration Policy Institute. “And to make sure you hold both an incentive and an implied threat, ‘If you don’t cooperate, we are going to do something.’”

But a major difference between the EU-Turkey deal is what Turkey was offered: 6 billion euros ($6,575 billion), not an insignificant sum. The US, by contrast, has offered Guatemala $47 million to build up its asylum system. It’s unknown how much the US offered El Salvador and Honduras.

“There were a lot of carrots in the EU-Turkey deal, and even in the EU-Libya deal and EU-Tunisia deal,” he said. “And in our deal with the Northern Triangle countries, there are very few carrots.”

So, why would Honduras, Guatemala and El Salvador agree?

It all comes down to asymmetry of power, said Rachel Schmidtke, a program associate with the Mexico Institute of the Woodrow Wilson International Center for Scholars.

“The US has a pretty big leverage over a lot of these countries,” she said. “It gives them billions in foreign aid. With Honduras, there’s major corruption allegations against the president, and I think they are trying to get in good graces with the US.”

And the US has already shown it will do anything to force Latin American countries to stop migrants from heading north. In Mexico’s case, Trump threatened in June to impose tariffs on all Mexican goods if the country did not cooperate with the policy. He has also threatened to cut hundreds of millions of dollars in aid to  Central America unless the countries curtailed migrants.

“The objective of this president is always short term,” Papademetriou said. “And the short term goal here is to make the chaos disappear.”