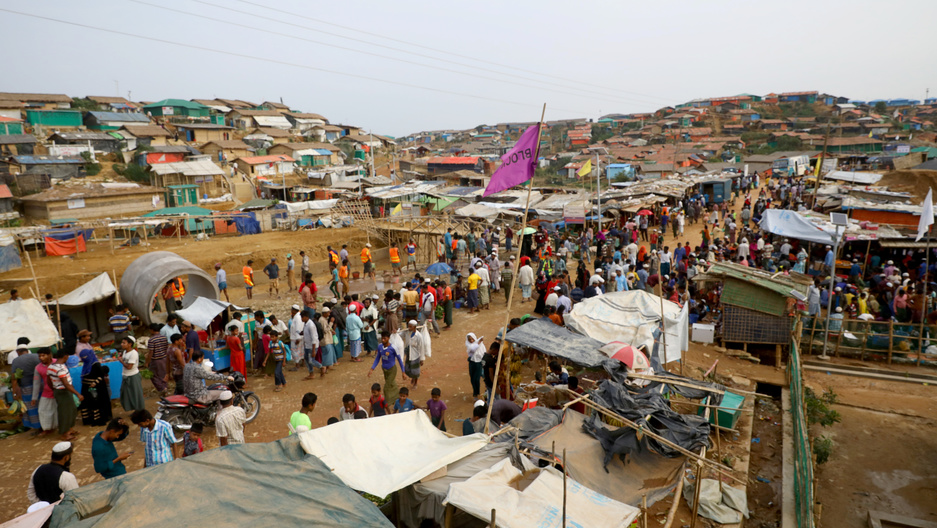 Rohingya refugees gather at a market inside a refugee camp in Cox's Bazar, Bangladesh, March 7, 2019.

The cut is deep. This week, the Trump administration announced that it will nearly halve the number of refugees admitted to the United States to up to 18,000 for fiscal year 2020, down from an already historically low 30,000 last year.

The changes come at a time of a growing refugee population across the globe, with nearly 26 million refugees worldwide, according to the United Nations. Of that population, the UN finds more than 1.4 million people in urgent need of resettlement, with Syrians representing a large part of that group.

Related: US leads global ‘race to the bottom’ in shutting door on refugees and asylum-seekers

The 2020 admissions number further reverses the leadership role the US once had as a country that welcomed refugees from around the world, according to refugee advocates. Before the Trump administration, the United States accepted a yearly average of 95,000 refugees since the US resettlement program began in 1980.

“It is misguided to see our refugee admissions program as the singular measure of America’s humanitarian-based immigration efforts,” reads the State Department news release. “The current burdens on the US immigration system must be alleviated before it is again possible to resettle large numbers of refugees."

The World’s immigration editor Monica Campbell spoke with Karen Ferguson, head of the International Rescue Committee’s Northern California chapter. The nonprofit is one of nine refugee resettlement agencies in the United States.

Monica Campbell: How do you see the current relationship between the US and refugees, the state of resettlement?

Karen Ferguson: I try not to go all the way back to the full history of resettlement, and yet it's hard not to do a little bit of that. You know, resettlement comes out of response to World War II and the United States has been a country that helped the world realize that we have a humanitarian imperative to recognize not only the fact that we're a country of immigrants, but that we needed to be a place of sanctuary.

Related: What it’s like to become a US citizen after a lifetime of statelessness

When and how are the numbers set for how many refugees the US will admit?

Mostly, it’s set around September or October, since the federal fiscal year starts Oct. 1. Under Trump, it's been very different. The number has always been a number that came out of the consultation process of the president, along with the Department of State, along with information that came from, for example, the United Nations High Commissioner for Refugees. And then it goes to the Senate Judiciary Committee for review, as well. This current administration has compressed that whole process and really made it much more of a statement by the administration of what the number will be, rather than a true consultation process.

What kind of changes have you expected during the Trump administration?

I think the rhetoric of this administration has been very clear. Did we expect it might be a drastic change? Potentially. Did we hope there would be consultation and adjustment of that? Absolutely. But I was quite shocked for it to go to historic lows. Shocked and then shocked again.

As the US steps away from its leadership role here, which countries are stepping forward?

Canada. It was never huge in its numbers for resettlement … but they stepped up, actually even more than the United States did, in terms of trying to respond to the Syrian crisis. And they have not stepped away in the same way that the United States has.

Speak more about the refugee pipeline to the US prior to 9/11.

Prior to 9/11, we used to have a fairly healthy pipeline and people would be put into that classification by the United Nations and then vetted by the Department of State. We didn't have a Department of Homeland Security back then. After 9/11, it was one of the first times you started to see what we would call a constricted pipeline. We had additional hoops that we needed individuals to make sure that they went through so that we knew this person was going to be an appropriate person to bring. It meant that we might say we would bring in 70,000 as a ceiling, but the actual number that we could get cleared through was much less than that because of all these additional clearances.

How have the changes under the Trump administration affected your office?

There are a couple of ways that affected us. First of all, in terms of just our morale and how we take care of our clients. That certainly has been something that we've had to really work on and to make sure that we have a way to understand and put this in context. It absolutely has made us pivot.

So there are still a lot of people that we need to be paying attention to and to be taking care of, but it is a different focus than focuses only on airport arrivals, which is how we welcome somebody when they're first coming to this country, and instead we're focusing on things like psychosocial support. We have in a sense, the ability right now to be able to say, “OK, let's take a little bit of a longer view of how we care for the individuals who have come into the community.” But it definitely has been a pivot.

How do you see the US refugee program going forward?

I'm an optimist. I also think that one of the things that has happened with this administration is that people, at a very grassroots level, are speaking up and saying, “We don't feel this represents our values.” The amount of volunteerism has just gone through the roof. Because of that, we have the ability to do all sorts of volunteer programming that we might not have had the room and the capacity to look for and find in the past. We can start a youth tutoring program — we have this really great program in Sacramento right now for women who want to learn to drive. And when we're in a period of new arrivals, we're focusing on getting families in homes and making sure that they have all their furniture and getting their first job. We also offer psychosocial programs that are really important for a lot of the population that has been coming directly out of conflict.