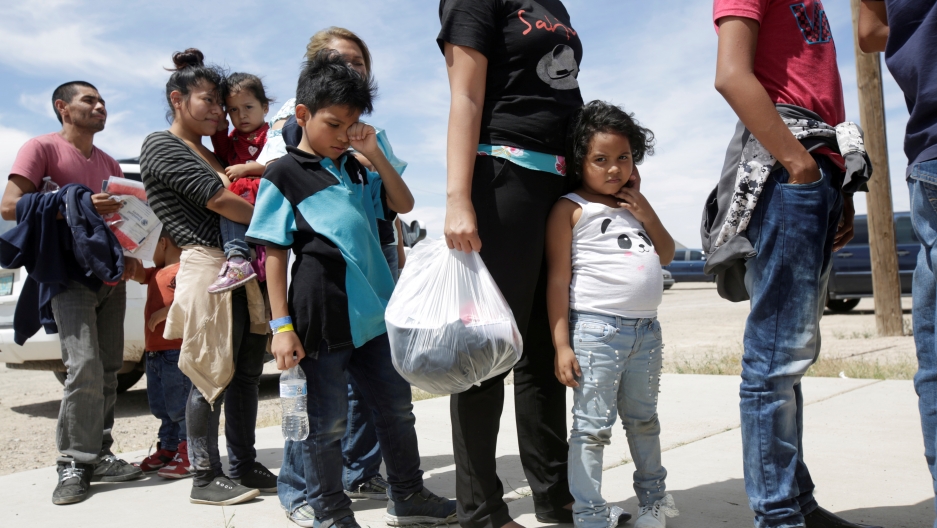 Central American migrants stand in line before entering a temporary shelter, after illegally crossing the border between Mexico and the US, in Deming, New Mexico, on May 16, 2019.

The fate of the US asylum system is uncertain after the Supreme Court issued a decision Wednesday night allowing the Trump administration to bar most asylum seekers from applying for asylum at the southern border as a lawsuit on the matter winds through the courts.

On Twitter, President Donald Trump called the decision a “big win.” But south of the border, there's a lot of concern about the ruling. The decision makes asylum seekers ineligible to apply for asylum in the US if they've passed through another country en route to the southern border.

Mexico's foreign minister Marcelo Ebrard told reporters Thursday, "Obviously, we don’t agree with it." The ruling means that a lot of Central Americans heading for the US must instead seek asylum in Mexico.

The World’s host Marco Werman spoke to Graciela Zamudio, a lawyer in Tijuana, Mexico, specializing in international human rights law, and Cris Ramon, an analyst with the Bipartisan Policy Center in Washington, D.C., about how the ruling will play out on the ground.

"This is a recipe for chaos. This means that the Mexican asylum system would get overwhelmed," Zamudio said. "It is already overwhelmed, but it would be way more overwhelmed by this decision."

Marco Werman: It's clear that the US-Mexico border is having a really hard time dealing with the number of asylum seekers. How do you respond to that? And what is the solution?

Graciela Zamudio: I think the solution is that both countries comply with the law. The US is bound to international law — as well as Mexico — in terms of allowing people who have started an asylum process in their territory to remain there. And the fact that Mexico is allowing this also makes the country responsible for all the violations of human rights that people in this situation are suffering. Most of them don't have access to legal representation, which in the US asylum-seeking process is basically the recipe to lose it.

Zamudio: Well that would definitely be something very good to do. Being such a powerful country and putting so much money in things like militarizing the border, it makes me feel that what we are facing is an unwillingness of the state to actually solve the problem. They can put all the money in making the system actually work the way the law says it should. Because in this situation in which we are, Mexico is basically like plastic bags on the street on a windy day. We're just going from one side to the other without really establishing what we want to be our international policy on migration issues.

There's also concern that the pressure on Mexico to deal with additional asylum seekers will create a migration crisis like the one Europe faced beginning in 2015. That was so divisive it led to a rise of nationalism and xenophobia across the continent.

Cris Ramon: We're going to see a repeat of what happened in the European refugee crisis. Mexico is going to have to start taking on more migrants because of this regulation, and that can cause serious strains on social infrastructure, social safety nets, jobs, the economy and push a country that's already starting to push back against the reception of migrants — Mexican polling shows that they're very much in favor of a hardline position — push that Mexican public ... to make a potentially larger [push]. And we saw this in Europe, especially in Greece and Italy where the Dublin III regulations — which is a first-entry agreement across the EU — pushed back migrants into Greece and Italy during the initial stages of that crisis. And what you saw is the same effects: understaffed, unresourced asylum agencies struggling to manage these flows, people becoming a lot more critical about the way it's being managed, and the impact on civil society and social safety nets, and then eventually starting to embrace more hardline xenophobic positions. So that's the concern I have with what's going to happen in Mexico.

And the organized criminal networks that are so heavily involved in smuggling — are they going to continue? Will they be charging more and will there be people still determined to get across the border?

Ramon: I think that's also what's going to happen. I think we have two scenarios that we could potentially see happen. ...Central American migrants are going to look at this and say, "You know what. I think it's time for us to no longer apply for asylum but to actually just get past CBP entirely." Up until this point we've been seeing these migrants arriving at ports of entry or presenting themselves to CBP officers between ports of entry to seek asylum regardless of whether they had an eligible claim or not. But now I think we might be seeing these individuals trying to just simply pay the smugglers to get them into the United States and which is what we saw prior to this recent wave of individuals arriving at the US-Mexico border. That's always been the case historically.

So kind of a return to those risky routes into the United States?

Ramon: Exactly. There's another riskier route. Right now it's hypothetical, but I'm going be curious to see what happens. What happens if you want to take a boat from Guatemala and then go try to find it — you know, part of California, Texas — to try to find a way into that and then try to seek asylum? That's a lot more hypothetical, but I think one of the things that we've seen with other large-scale migration crises is that if you shut off one way for individuals to enter a country to seek asylum, sometimes they will find other ways. We saw this in the European refugee crisis: Once the eastern flank of Europe was sort of closed off more individuals took riskier routes through the Mediterranean from Libya to Italy. And that's the question here are people going to take even riskier routes than they already have because of this decision and because of this regulation?