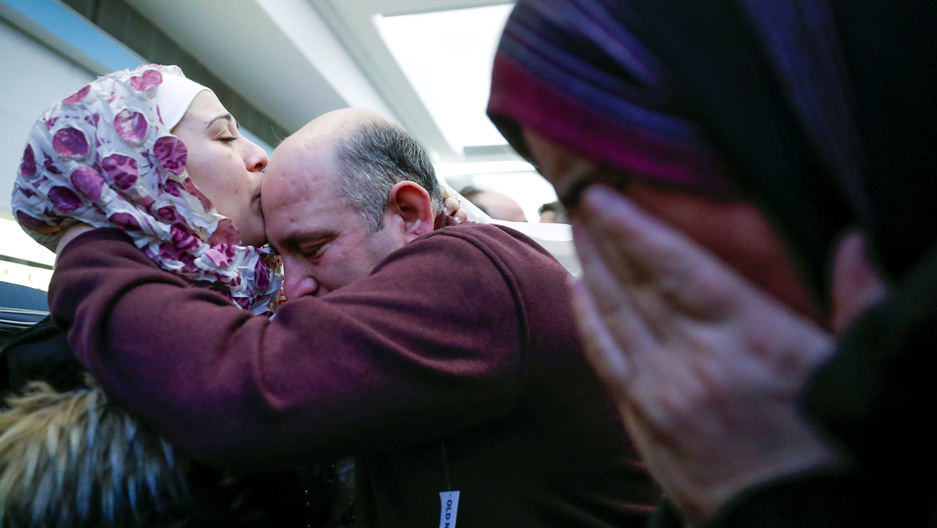 The day Kara Ulmer closed down the refugee resettlement office she led in Akron, Ohio, was one of the hardest days of her life.

Ulmer opened the office, a local affiliate of World Relief, in February 2015. Armed with balloons and signs, her staff and local volunteers used to welcome refugees at the airport when they landed in the United States. The staff of seven steered the newcomers through their first weeks, months and years in a foreign country: enrolling their children in school, applying for jobs, paying their cable bills, and navigating a maze of paperwork to start their own businesses. The Akron World Relief office helped resettle 415 refugees, some from countries as far-flung as Bhutan, Iraq, Myanmar and Democratic Republic of Congo.

But with far fewer refugees arriving due to the Trump administration’s efforts to curb resettlement, Ulmer said, she was forced to let staff go, then shutter World Relief’s office in April. They gave away $100,000 worth of in-kind donations — mainly household goods to help refugees set up new lives — to local churches and nonprofits. 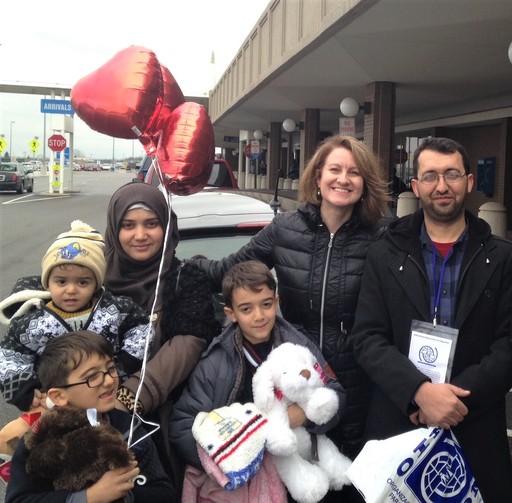 Kara Ulmer, second from right, former director of World Relief’s refugee resettlement office in Akron, Ohio, welcomes a Syrian refugee family to the US in 2017. The office closed in April.

“It was very emotional and painful for everyone involved,” she said. “We were leaving 415 refugees without the potential for continued help with the agency that resettled them.”

The same scenario is playing out at resettlement agencies across the United States. As the US admits fewer refugees, the organizations that serve them are withering. Local offices rely, in part, on federal funds that are only disbursed when refugees arrive. Fewer arrivals, and thus fewer federal dollars, have financially strained many offices — and threatened a national resettlement infrastructure that has been steadily built up over four decades.

The damage will far outlast this administration, experts say.

More downsizings and closures are likely on the way: The Trump administration announced Thursday that the refugee admissions cap for the next 12 months will be set at 18,000, the lowest point since the Refugee Act of 1980 was established. The cap for fiscal year 2019 was 30,000.

Trump also signed an executive order Thursday allowing state and local governments to veto refugees from coming to their areas.

The low figure drew widespread condemnation from refugee and immigration advocates. It comes at a time when the number of refugees worldwide has reached a record-breaking 26 million, according to the United Nations Refugee Agency. Of that figure, the UN finds more than 1.4 million are in urgent need of resettlement, with Syrians representing the largest group.

“To cut the number of refugees the US will accept to this low of a number reflects nothing more than this administration’s attempts to further hate, division, and prejudice in a country that once valued dignity, equality, and fairness,” said Ryan Mace, a refugee specialist at Amnesty International USA, in a statement Thursday. “This is purely a political decision, and one that couldn’t come at a worse time.”

In announcing the lower resettlement cap, the Trump administration said it was instead focused on the huge increase in people seeking asylum at the southern border — who do not enter the US via the official refugee resettlement program.

“It is misguided to see our refugee admissions program as the singular measure of America’s humanitarian-based immigration efforts,” the State Department said in a press release. “The current burdens on the US immigration system must be alleviated before it is again possible to resettle large numbers of refugees.”

Related: US leads 'global race to the bottom' in shutting door on refugees and asylum-seekers

Until Trump, the US had been the world’s leader in resettling refugees fleeing war, persecution and violence throughout the world.

Cuts have affected each of the nine national agencies that contract with the State Department to resettle refugees in communities across the country. The federal government provides them with a $2,175 grant per refugee to cover initial expenses such as food, rent and job-placement services. Local affiliates also get longer-term funding through state grants and private donors to help refugees during their first year in the US.

Some 325 local offices around the country were resettling refugees as of 2016. That year, the Obama administration pledged to resettle 110,000 — a historic high. But facing drastic cuts under Trump, more than 100 offices have closed their doors or suspended their resettlement programs as of this April, according to a report by Refugee Council USA. Hundreds of staff have been laid off from affiliates of the larger national agencies, such as the International Rescue Committee, Lutheran Immigration and Refugee Service, and Catholic Charities USA, which works with the US Conference of Catholic Bishops.

Part of the reason for the downsizing was a 2017 State Department order saying that any agencies resettling fewer than 100 refugees in fiscal year 2017 would not be authorized to handle new arrivals. The department later asked the nine agencies to propose 35 local affiliates for shutdown.

That infrastructure will be difficult to build back up after President Donald Trump leaves office, said Anne Richard, who from 2012 to 2017 served as assistant secretary of state for the Department of State’s Bureau of Population, Refugees and Migration, which oversees the US government’s refugee program. Much of these programs’ success integrating refugees depends on interpersonal relationships and ties between the local resettlement agencies and their surrounding communities, she said.

“We can’t just accordion in and out all of the infrastructure to resettle refugees."

“We can’t just accordion in and out all of the infrastructure to resettle refugees,” Richard said. “These agencies have to rent office space, so they’re going to have to give that up. Staff who left will have to find other jobs. They have relationships with landlords who are willing to rent to people who show up in the US without credit history, employers who will hire refugees. We stand to lose a lot, and we can’t just flip it back out when a new president comes in.”

Those losses, she added, are “self-inflicted harm.”

That’s certainly the case in a place like Akron, a Rust Belt city with a population decline that has been stemmed, in part, by the arrival of tens of thousands of refugees over the past decade. Many arrived with the help of another resettlement agency, the International Institute, which has felt the financial squeeze but remains open.

"The knock-on potential impact on our community is very significant.”

“Those people strengthened our infrastructure because they shored up tax bases,” Ulmer said of the new arrivals. “They kept the high school open in a neighborhood where the population was aging. There’s so much they’ve brought, economically. The knock-on potential impact on our community is very significant.”

‘Their lives are on hold’

But it’s refugees themselves who have the most at stake due to lower admissions numbers.

The Trump administration said it will allocate slots within the 18,000 to specific vulnerable groups: 4,000 for Iraqis who helped the US military, 5,000 for people persecuted on the basis of religion, and 1,500 for people from Central America. That leaves 7,500 slots for people who have cleared the lengthy vetting process for US resettlement, which often takes years.

Thousands of those slots have already been allocated, Grigsby said, meaning the cuts to admissions numbers lengthen the line for everyone else. 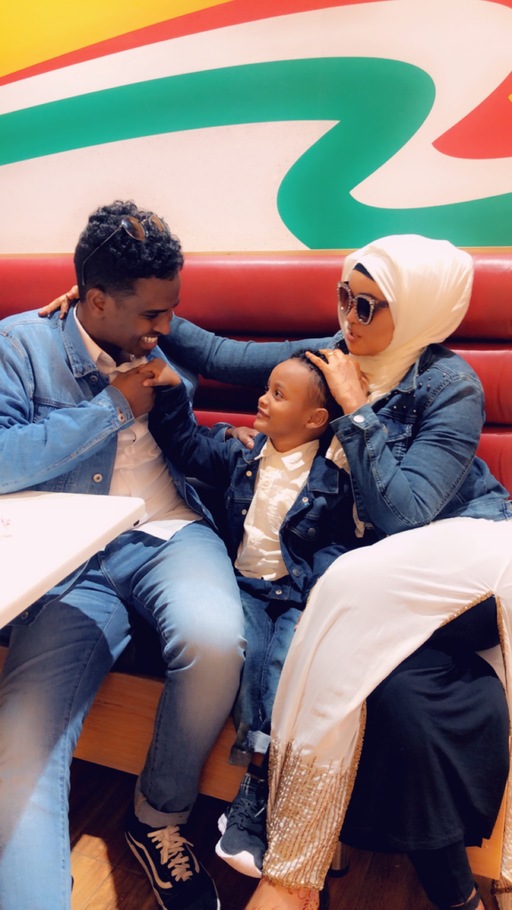 Afkab Mohamed Hussein, left, visits his son, Abdullahi, and wife, Rhodo, on a trip to Nairobi, Kenya, after three years apart. It was the first time Hussein met the boy.

“As hard as it is for us, it doesn’t compare to the refugee who has missed another milestone for their child who hasn’t been able to come to the US because their case is on hold,” said Angie Plummer, executive director of Community Refugee and Immigration Services, the Columbus, Ohio, affiliate of Church World Service, a national resettlement agency. “I have a client whose 16-year-old died waiting. He was 12 when she applied for him to come. My file cabinets are bursting with callous stories like that, because nothing is moving along. Their lives are on hold.”

Another of Plummer’s clients, Afkab Mohamed Hussein, is a Somali refugee who grew up in Kenya’s Dadaab camp and was resettled to Columbus in 2015. His wife and infant son, born after he was resettled, were scheduled to join him the US in January 2017 — the month Trump took office and issued an executive order banning travelers from several majority-Muslim countries, including Somalia.

This summer, after years of waiting, he flew to Nairobi to see them and met his son, 3-year-old Abdullahi, for the first time.

“I feel stuck. Almost three years, stuck,” said Hussein, who is a plaintiff in a lawsuit challenging the travel ban. “As a refugee, you need your family to do well in the United States. That’s my hope, that they will come soon.”