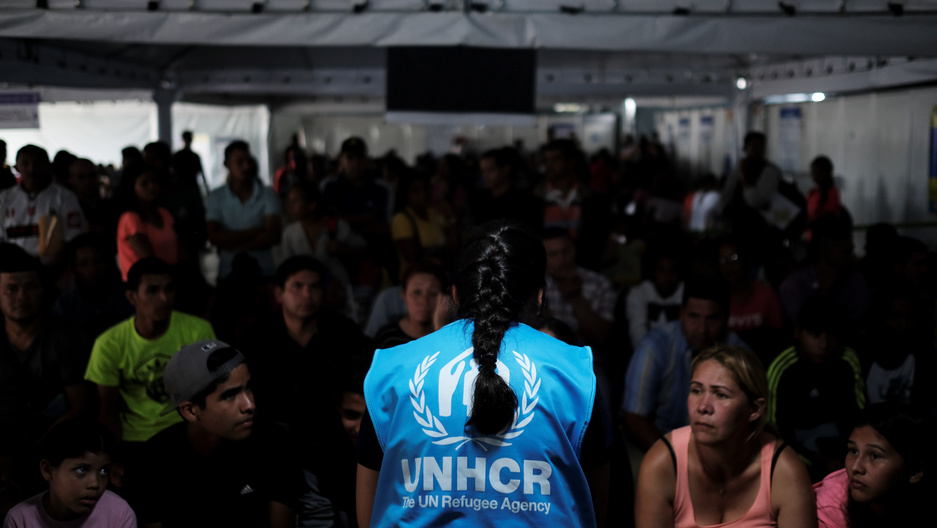 A member of United Nations High Commissioner for Refugees (UNHCR) talks with Venezuelans as they queue in line to receive a vaccine after showing their passports or identity cards at the Pacaraima border control, Roraima state, Brazil, on Aug. 8, 2018.

Growing up in an Ethiopian refugee camp, Tecle Gebremichael used to dream of going to school in the United States.

He finally got that chance in 2012, when he was resettled to the US and landed in Boise, Idaho. Now 29 years old, Gebremichael is a homeowner, student at Boise State University, and petroleum supply specialist for the US Army Reserves. He’s also running for a seat on Boise’s city council.

Gebremichael, who recently became an American citizen, credits the United States’ refugee resettlement program for allowing him to fulfill his American dream.

“I think it’s a responsibility we have for other human beings,” said Gebremichael, who traveled to Washington, DC, earlier this year to demand an increase in the refugee admissions ceiling. “For a country like ours, the US can do a lot [for refugees] — we have the capacity and we have the opportunity. Taking refugees is part of our history. And when refugees come here, they contribute to the economy.”

But stories like Gebremichael’s may become increasingly rare if President Donald Trump has his way. As part of its effort to limit immigration to the US, the Trump administration is slowly choking off the United States’ resettlement program, which historically has taken in more refugees than any other country in the world. Trump cut refugee admissions to 30,000 for the current fiscal year — down from the 110,000 former President Barack Obama proposed in 2015 before he left office. Trump administration officials are considering slashing refugee admissions further — possibly to zero — for fiscal year 2020.

The looming cuts to refugee resettlement, when taken alongside the Supreme Court’s decision last week to allow the Trump administration to go ahead with a plan that bars most migrants from seeking asylum at the southern border, show how the White House is succeeding in making it nearly impossible for vulnerable people to seek refuge in the United States.

“These two programs in particular are meant for the very people who need safety the most,” said Jen Smyers, director of policy and advocacy for Church World Service, a nonprofit that helps resettled refugees, as well as asylum seekers.

Unlike the asylum system, where people arrive in the United States on their own to request protection at ports of entry or near the border, the refugee resettlement program is highly organized and tightly controlled. 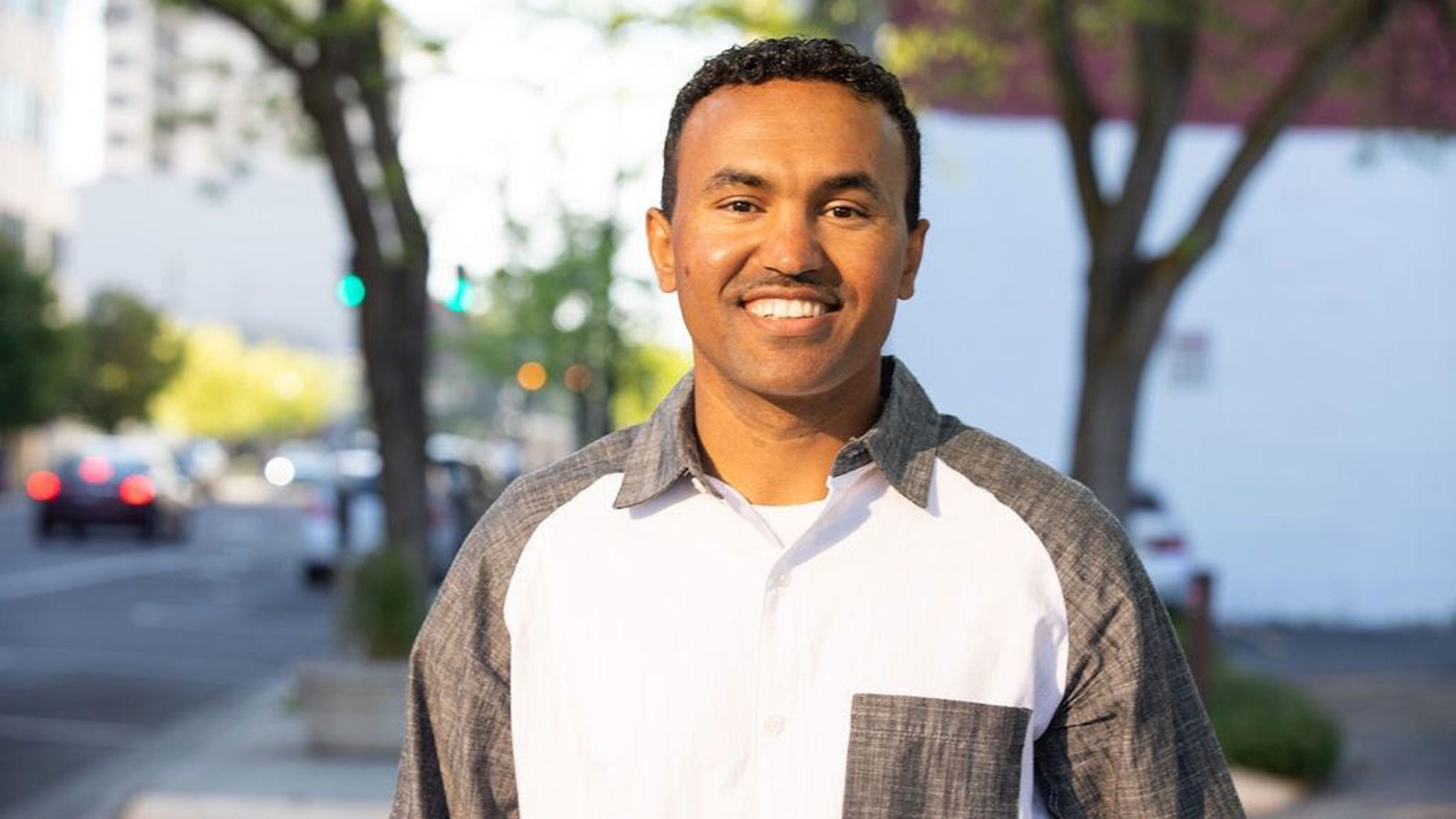 Tecle Gebremichael, a refugee born in Ethiopia who was resettled to the US, has also advocated for the expansion of the US resettlement program.

The US selects exactly which refugees from overseas it wants to bring into the country. The federal government then contracts with US nonprofits such as Church World Service, the International Refugee Committee and Lutheran Immigration and Refugee Services to ensure refugees are being placed in local communities with space for them. Those agencies then oversee refugees’ integration into American life.

But the asylum system, too, has its strengths, Smyers said.

“We have both systems for a reason,” she said. “With the refugee program, even before the Trump administration, it took a long time to be approved, or people may not have access to it from where they are. That’s why the US has an asylum system for people who take matters into their own hands. That’s why we encourage other countries to keep their borders open.”

The “asylum ban” creates yet another hurdle that will be insurmountable for most of the migrants arriving at the southern border: It deems asylum seekers ineligible for asylum if they’ve traveled through another country en route to the US without first being denied asylum in that country. The Supreme Court’s unsigned decision will allow the policy to stay in effect until at least December, when the Ninth Circuit Court of Appeals hears a legal challenge to the case.

Between cuts to the resettlement program and new restrictions on asylum seekers, people seeking protection from the US have few other avenues to do so.

“If the administration were serious about saying, ‘We want them to apply for protection where they are,’ we have to make good on that promise,” Smyers said. “And not only are they not coming up with any new mechanisms for people to apply from where they are, they’re cutting resettlement — one of the few avenues where they can do that.”

“It calls their bluff and really demonstrates they are not serious about wanting people to apply for protection through any of the legal channels the US has established.”

Global 'race to the bottom'

Since its inception in 1980, the US refugee resettlement program has served humanitarian aims and has also been a strategic tool for US foreign policy.

“Its primary aim is humanitarian. Traditionally, it’s had a lot of bipartisan support,” said Elizabeth Foydel, deputy policy director with the International Refugee Assistance Project in New York. “It also serves our strategic interests in places like the Middle East or southeast Asia that are hosting a lot of refugees.”

“It’s not like others are going to step in if the US reduces resettlement. In fact, it can be a global race to the bottom. And that can cause a lot of instability.”

“The US is a global leader in resettlement, and other countries are taking their cues from us,” she continued. “It’s not like others are going to step in if the US reduces resettlement. In fact, it can be a global race to the bottom. And that can cause a lot of instability.”

Last year, Canada surpassed the United States in refugee resettlement for the first time. But other countries’ increases have not made up for US cuts.

Only a tiny fraction of the world’s 30 million refugees end up resettled to countries such as the United States. Fewer than 1% of all refugees are referred for resettlement, according to the United Nations Refugee Agency. Last year, 92,000 refugees were settled globally — down from a peak of 189,000 in 2016.

“These programs are already so narrow, and the bar is so high,” Smyers said. “You have to prove you’re fleeing individualized persecution on the basis of race, religion, nationality, political opinion or membership in a particular social group. You have to have all your documentation; you have to go through interviews. It’s incredibly difficult to be approved.”

Those selected to come to the US must undergo a lengthy vetting process that typically takes 18 to 24 months.

In Gebremichael’s case, it was four years from the time he was notified he’d been accepted for US resettlement until he got on a plane to Boise. During that time, he underwent a series of security screenings, medical exams and interviews with US officials abroad.

Related: 20 years ago, asylum seekers were not automatically put in immigration detention

Simultaneously cutting refugee resettlement and access to asylum sends the wrong signal to US allies around the world that may be hosting millions of displaced people, said Yael Schacher, a senior advocate with Refugees International who focuses on the US refugee and asylum systems.

“Banning asylum seeking at the border and cutting refugee resettlement, together, will mean more impunity in countries of origin and refugee-receiving countries nearby, more regional instability and premature returns of refugees to danger, and most of all, tremendous suffering and inhumanity to the displaced,” Schacher said.

Globally, forced returns of refugees to their home countries are on the rise as host countries get impatient with the burden they are bearing largely on their own. At a minimum, Schacher added, resettlement is one tool to show host countries — and refugees themselves — that the US supports them.

“By turning our back on them, how can we ask the Colombians to continue providing refuge to Venezuelans? How can we ask Jordan not to prematurely send Syrians back to Syria?” Schacher said. “We lose our moral authority, but we also threaten regional stability."