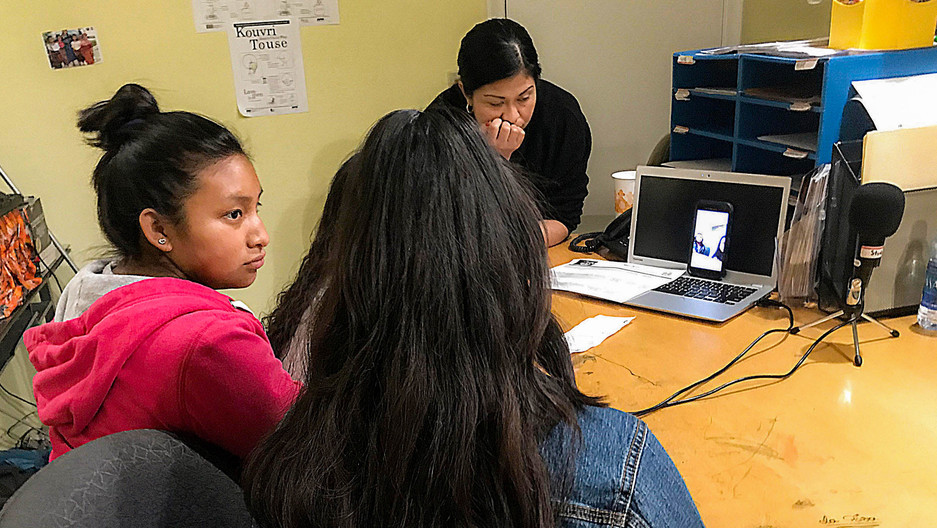 It can be hard to find a truly quiet place in the Lake Worth, Florida-based Guatemalan-Maya Center.

Just inside one door, case workers and other staff answer phones and talk clients through paperwork, immigration processes and other services. A long, narrow room on the ground floor has chairs along one wall that are often filled with people waiting for help.

Other activities, like planning for cultural events and staging for projects and donations, spill over to the spaces in between.

Related: In this California classroom, students teach each other their home languages — and learn acceptance

But at least one afternoon a week, a group of high school girls carve out some space in the quietest area they can find to huddle around a laptop.

They call themselves the Mayan Girls. 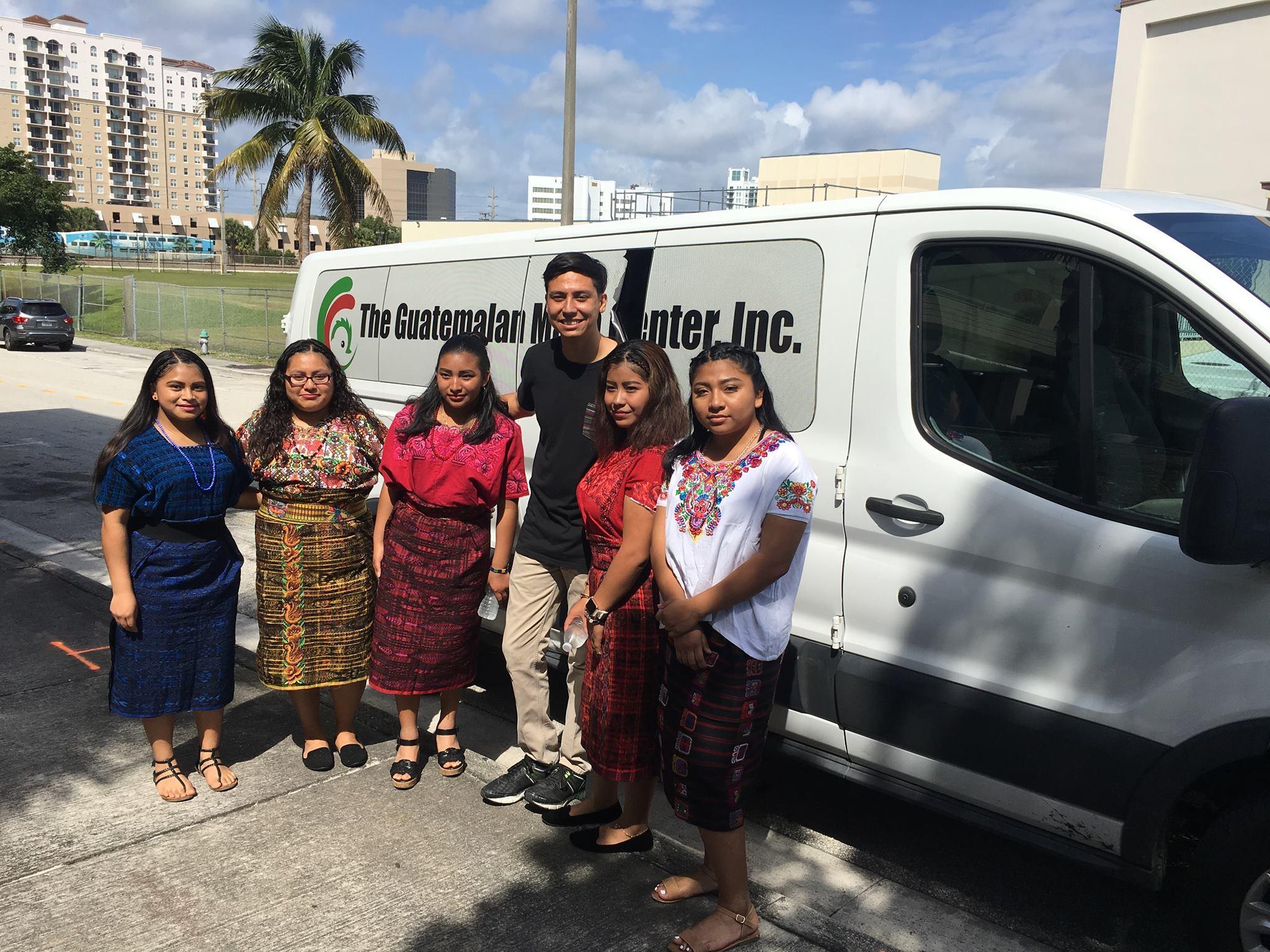 The Mayan Girls, dressed in the traditional outfits they wore to pitch to Philanthropy Tank, stand with their adviser, social worker Daniel Morgan.

Courtesy of the Mayan Girls

The girls, all students at nearby Lake Worth Community High School, began coming to the center to complete community service hours for school. They started out translating on the spot between the center’s clients and its caseworkers.

Like many of the center’s clients, they’re of Guatemalan-Mayan descent. Most of them speak Spanish, English and also a Mayan language.

Related: Mexico wants to run a tourist train through its Mayan heartland — should it?

Mayan languages are an entirely separate language family from Spanish or English. For someone who speaks only Q’anjob’al, Mam or K'iche', Spanish would make about as much sense as Arabic does to an English-only speaker. And a good portion of the center’s Indigenous clients speak only a Mayan language.

“I have tons of information, but I can’t get it to them, because I don’t personally speak a Mayan language.”

“I have tons of information, but I can’t get it to them, because I don’t personally speak a Mayan language,” said Daniel Morgan, a social worker at the center who’s also served as the Mayan Girls’ adviser.

When Morgan sits down with a client who doesn’t understand Spanish or English, he says he’ll turn first to other clients in the waiting room with more proficiency to help him get information across. If there’s no one there who can help, he calls up “one of my trusted translators.”

The high school girls started out among those trusted translators. But high school classes meant they weren’t available during most of the center’s weekday hours.

That’s what led them to hunt for quiet spaces at the center to gather around their computer.

The girls mostly speak Q’anjob’al, which is also the most prevalent Mayan language among Palm Beach County’s Indigenous population. (Read more about Q'anjob'al and other Mayan languages here.)

Ramona Francisco, a high school junior, is the voice of the Mayan Girls on most of their recordings.

She and the others start with a piece of information that needs translating — sometimes a flyer from the local health clinic or the Department of Children and Families, sometimes information passed to them by other county agencies looking to reach more Guatemalan immigrants — and talk through it.

Related: This interpreter is helping get justice for Indigenous women raped and tortured in Guatemala’s civil war

They’ll usually read through it in Spanish or English, then bounce ideas off each other about how to express it in Q’anjob’al.

The girls aren’t professional translators — they’re teenagers. Translating a tricky concept isn’t as simple as plugging it in to Google Translate, so sometimes they have to talk their way around more complex ideas like “domestic violence” or “average.”

As Francisco talks her way through it, the other girls will chime in with “no, that’s not how you say it” or “yes.”

Once they’ve run through the information a couple times and agreed on how to phrase it, Francisco can usually record a clean version in just a few attempts. She leans into a microphone plugged into the computer’s USB port and spills out the Q’anjob’al translation, glancing down every few paragraphs at the Spanish version in front of her.

That was the Mayan Girls’ system for recording over their first few months — laptop, microphone, free online recording software.

Then, last March, they pitched their project at a “Shark Tank”-style event run by Philanthropy Tank, a startup incubator for teen-run community service projects.

“Hello, good afternoon, we are the Mayan Girls,” teenager Lorena Felipe Sebastian called out from a stage at the Kravis Center for the Performing Arts last March. She and four others stood clad in traditional skirts and embroidered blouses.

She and Daniella Domingo, another Mayan Girl, outlined their project. They were asking for $15,000 to fund equipment, outreach and supplies for monthly community events.

They received the money — and a giant novelty check that sits in the Guatemalan-Maya Center.

They’ve already used some of the funds. They held a back-to-school event in early August to introduce themselves to the community and pass out school supplies. They bought a laptop and are stocking it with audio- and video-editing software. 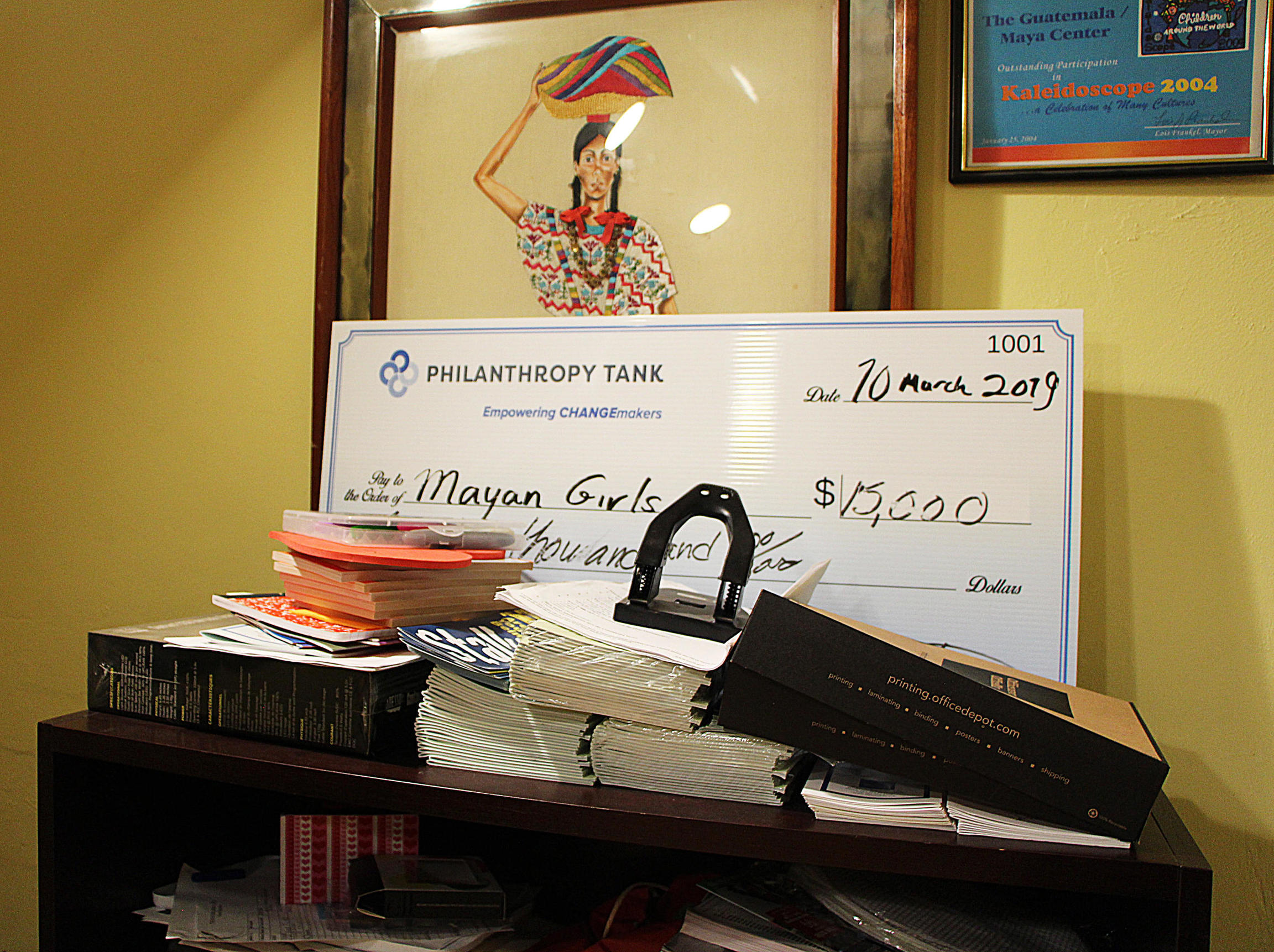 The Mayan Girls' novelty $15,000 check sits on a cabinet at the Guatemalan-Maya Center.

A camera and additional microphone will, they hope, allow them to flesh out their simple audio recordings with skits demonstrating the spoken information.

Guatemala has one of the lowest literacy rates in the Western Hemisphere, and it’s particularly low in Indigenous communities.

Audio has been a useful medium, since it allows Mayan-language speakers who can’t read the language to understand the information. The girls hope recording in which they act the information out, as well, will reinforce what they’re saying.

A legacy of translation

The Mayan Girls are far from the first to reach out to their community in Mayan languages.

Poli Gaspar Xuncax, the Guatemalan-Maya Center’s co-founder who died of cancer in May, started out as a translator for new arrivals fleeing the Guatemalan civil war. She bridged the language gap between refugees and the immigration attorneys helping them build their legal cases.

Later, when Indigenous women were giving birth to babies with higher-than-usual numbers of complications, Gaspar Xuncax and other Q’anjob’al speakers helped coax them into doctors’ offices to make sure they were getting necessary prenatal care.

“The women believed them, and trusted them, because they spoke a Mayan language,” said Morgan, the social worker.

Felipe Sebastian saw the power of communicating with people in their native language when she first started volunteering at the center.

“They would seem frustrated that they don’t understand. But when we’re there, they feel more relieved that we’re there to help them and have a better understanding of what others are trying to tell them.”

“They would seem frustrated that they don’t understand,” she said. “But when we’re there, they feel more relieved that we’re there to help them and have a better understanding of what others are trying to tell them.”

Felipe Sebastian herself didn't grow up speaking Q'anjob'al. She started learning three or four years ago when her mom's comadre, a family friend, moved to South Florida speaking no Spanish or English. Over time, Felipe Sebastian honed her Q'anjob'al, and the other woman developed Spanish skills.

Now, Felipe Sebastian serves as her family's translator, in addition to her work with clients and recordings at the center. She interprets official forms that arrive in the mail and travels to courthouses, hospitals and health clinics to help members of her extended family get the services they need.

The Mayan Girls are adding technology to their community's translation legacy. Over time, they’re hoping to be able to provide that same reassurance of familiar language on-demand, with audio and video recordings that will help guide their community through common issues.

Felipe Sebastian is also thinking big, in the long term.

In the same way that many local agencies, doctor’s offices and customer service lines allow callers to “press two for Spanish” and often another number for Kreyol, she said she thinks “it would be awesome if you press four for Q’anjob’al, or a Mayan language.”

Morgan would love to see the girls take their language skills into social work, like Gaspar Xuncax.

“They’ll be the future social workers, and community leaders,” he said.

Like most teenagers, though, the girls have their own dreams for the future.

“Mm, for me, I want to work with the center,” said Sebastian, “but later on, in my future, I want to be a boss in construction and roofing.”

Despite the federal immigration crackdown, new people are still arriving from Guatemala. They are fleeing violence and food insecurity in their home country.

Duke University professor Sarah Bermeo, who has studied migration from Central America, said that while Guatemala may trail El Salvador and Honduras in its rate of violent crime, there’s still a high level of violence — and, with crimes going unpunished at rates as high as 95% at points in the past several years, little deterrence or chance for justice.

“People really don’t know how they’re going to keep feeding their families if they remain where they are,” she said.

Among the broader Guatemalan population, Indigenous communities are particularly at risk. Targeted violence during the civil war forced many to flee to the country’s highlands, where they don’t always have documented rights to the land where they’re living. As a result, the land can be taken from them, and they can’t borrow against it to keep their families afloat.

“When the overall situation in Guatemala deteriorates, it hurts the marginalized the hardest. It's a poor country, but this is an exceptionally poor group and large group within that country.”

“When the overall situation in Guatemala deteriorates, it hurts the marginalized the hardest,” said Bermeo. “It's a poor country, but this is an exceptionally poor group and large group within that country.”

With an established Guatemalan community already present in Palm Beach County, many who have fled to the US have settled in Lake Worth and Jupiter. Some speak Q’anjob’al, but others are bringing Mam, K'iche', Awakateko and other languages within the Mayan family.

“When I go to my classes, it’s always that I hear a person speaking a Mayan language,” said Felipe Sebastian. “So, I know that there’s a big majority of them.”

This story originally appeared on WLRN.