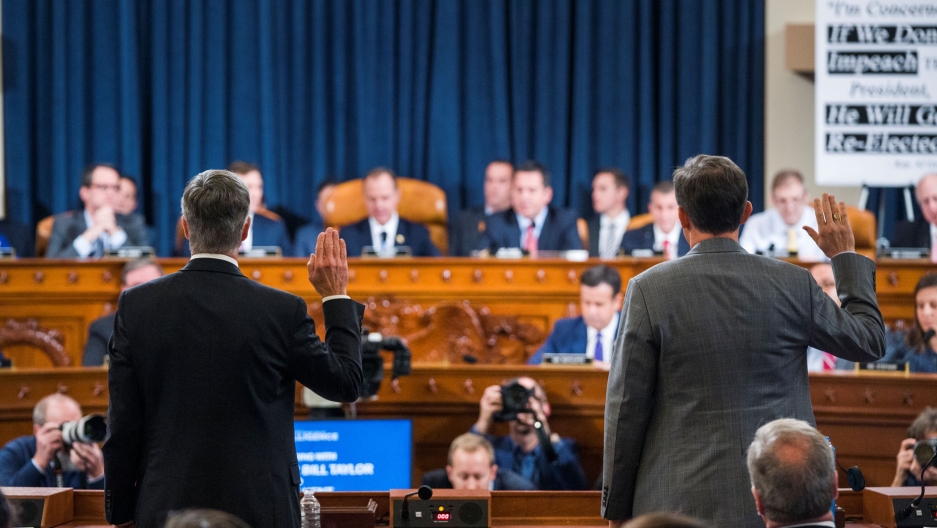 Bill Taylor, charge d'affaires at the US embassy in Ukraine, and Deputy Assistant Secretary of State for Europe and Eurasia George Kent, right, are sworn in to testify before the House Permanent Select Committee on Intelligence hearing on the impeachment inquiry into US President Donald J. Trump, on Nov. 13, 2019 in Washington, DC.

On Wednesday, investigators held the first televised interviews in the ongoing impeachment inquiry into US President Donald Trump.

Acting US Ambassador to Ukraine William Taylor and George Kent, a senior State Department official in charge of Ukraine policy, answered questions from members of the House Intelligence Committee regarding the administration’s foreign policy dealings in Ukraine.

At the center of the impeachment inquiry is whether Trump improperly conditioned security aid and a White House meeting with newly-elected Ukrainian President Voldymyr Zelenskiy on a commitment to investigate Trump’s political rivals. The evidence indicating a quid pro quo and a shadow foreign policy led by Trump’s personal lawyer, Rudy Giuliani, has been widely corroborated by witnesses, according to publicly released materials.

In their public testimony, both Taylor and Kent reiterated their concern about a pressure campaign withholding security aid, and a presidential meeting, to push Zelenskiy to investigate Trump’s political rivals.

According to Taylor, a member of his staff overheard a July 26 phone call between Trump and US Ambassador to the EU Gordon Sondland, in which Trump asked about the investigations. This call came the day after the July 25 call in which Trump asked Zelenskiy to “do us a favor though.”

"Ambassador Sondland responded [to Taylor’s staff member] that President Trump cares more about the investigations of Biden, which Giuliani was pressing for," Taylor testified.

Taylor also noted the detrimental effect of withholding security aid. Ukraine has been in a five-year war with Russian-backed separatists in the Donbas region. Around 13,000 have died in the war.

A central question, said Rep. Adam Schiff in his opening statement Wednesday, is “If President Trump did either, whether such an abuse of his power is compatible with the office of the presidency?”

Ambassador Daniel Fried, who spent four decades in the US Foreign Service, retiring in 2017, said the central issue in the inquiry is what responsibility the president carries for abandoning public duty in favor of private interests.

“The issue is not a policy disagreement over President Trump's course of action one way or another,” said Fried, now a distinguished fellow at the Atlantic Council. “The issue is whether he was pursuing a private political agenda, sacrificing public policy, including his own declared public policy of support for Ukraine.”

The president’s duty is to protect and defend the Constitution and nation. Forsaking public responsibilities for partisan or private interests would be a significant problem, Fried said.

According to the Constitution, the president can be removed from office if impeached and convicted for “treason, bribery, or other high crimes and misdemeanors.”

“Arguably, allegedly President Trump was soliciting a bribe from Ukrainian President Zelenskiy. That is, he was telling Zelenskiy that he, Trump, would withhold both needed military aid and a visit to Washington unless Zelenskiy acted on behalf of the president's private interests,” Fried said. “Now, I am not making that accusation myself. I'm not a lawyer. But that is the nature of the issue. Arguably the president's conduct rises to that level of bad.”

The president’s defenders have suggested the actions of the president and his representatives, including Giuliani, are a legitimate part of US efforts to combat corruption.

Fried disagrees, if Trump was interested in pushing Zelenskiy to address corruption, “he would not have said what he actually said in that telephone call,” Fried said. “[The president] forces his defenders to engage in, as I said, a convoluted and tortured reading of the actual transcript in order to make a point which really is incredible.”

Some Republicans have also directed scrutiny towards Joe Biden, Trump’s rival in the 2020 presidential elections, and Biden’s son, Hunter, who sat on the board of a Ukrainian energy company, Burisma.

During Biden’s tenure as vice president in the Obama administration, he was influential in calling for the removal of Ukrainian prosecutor Viktor Shokin, widely disparaged in the international community for failing to prosecute corrupt oligarchs in Ukraine. Some defenders of Trump have suggested Biden’s involvement was geared toward protecting his son’s interests in Burisma.

But Biden’s efforts in the Shokin case followed a decades-long US anti-corruption foreign policy, said Ben Freeman, director of the Foreign Influence Transparency Initiative at the Center for International Policy.

“Joe Biden's behavior in Ukraine, I think in many ways, it really fit the model of what we've seen from the US in terms of trying to fight corruption abroad,” Freeman said. “In fact, we had a lot of Republican senators who were also calling [Shokin] out at the time.”

While Freeman said it is “very fair” to question why Joe Biden did not ask his son to step down from Burisma, he said Republicans are trying to do a “historical rewrite” of Biden’s push to remove Shokin.

“Somebody like Shokin, who's allegedly taking bribes, allegedly failing to prosecute a lot of other corrupt people there — he's sort of at the heart of some of the systematic corruption that we were seeing in Ukraine,” Freeman said. “So I think it's sort of disingenuous to critique someone for trying to weed out corruption in a foreign country. The US has a long history of doing exactly that and really it was a bipartisan effort.”

"Somebody like Shokin, who's allegedly taking bribes, allegedly failing to prosecute a lot of other corrupt people there — he's sort of at the heart of some of the systematic corruption that we were seeing in Ukraine."

In the 20th century, US anti-corruption efforts abroad were largely pitted in contrast to the influence of the Soviet Union. In the post-Soviet period, those efforts have extended to helping former Soviet republics and satellite states — like Ukraine — build democratic institutions.

But Trump’s shadow foreign policy in Ukraine — and particularly the involvement of Giuliani, who appears to have relationships with known corrupt operators in Ukraine — presents a significant problem for the US example of governance.

“Ukrainians asked me whether they could still trust the United States. After 40 years of being an American diplomat, that was a painful question, especially because I understood the basis for it.”

“If the story that we're hearing about Giuliani is true and his efforts really were principally to get the Ukrainian government to launch these investigations into Trump's political rivals, then that's not fighting corruption abroad,” Freeman said. “Nothing about that is trying to prevent corruption abroad. In fact, that itself is, to me, a corrupt act.”

Trump has also openly invited Russia and China to involve themselves in US elections and investigate the president’s political opponents.

Related: What Ukrainians think about Trump and his 'quid pro quo' in 3 charts

“That sends a really bad signal to the world that the US political process is open to foreign interference in that if you help him in that process, you will be rewarded for it,” Freeman said. “And to me, that poses a real problem for the American public.”

It’s also a problem for the US stance among allies abroad — and Ukrainians in particular.

“Ukrainians asked me whether they could still trust the United States,” Fried said. “After 40 years of being an American diplomat, that was a painful question, especially because I understood the basis for it.”