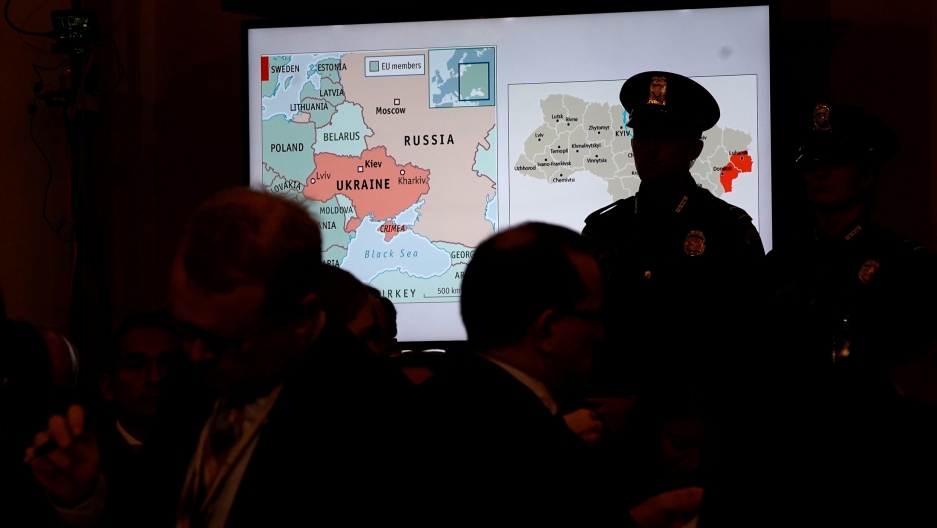 A map of Ukraine is seen displayed a House Intelligence Committee impeachment inquiry hearing into US President Donald Trump on Capitol Hill in Washington, DC, on Nov. 13, 2019.

As Americans turn their attention to the first public hearings in the House impeachment investigation, there is another country that has been affected by the scandal that’s fueling the investigation: Ukraine.

What do the Ukrainian people think of the impeachment controversy?

Trump allegedly threatened to withhold US$400 million in US foreign military aid aimed at countering Russian aggression. The ongoing military conflict with Russian-backed separatists in the Donbas region of Ukraine has claimed more than 13,000 lives to date.

Reportedly, Zelenskiy was prepared to bow to this pressure, until luck spared him making such a decision.

What decision do Ukrainians think their president should have made when faced with Trump’s apparent “quid pro quo?” Do they believe the Trump administration supports Ukraine?

As part of our ongoing research on Eurasian security and governance at the Ohio State University Mershon Center for International Security Studies, we posed these questions to 2,000 Ukrainians.

Our results show how Trump’s purported attempt to co-opt Ukraine’s precarious position with Russia worsens divides inside Ukraine and weakens US influence.

Between Oct. 4 and 16, we conducted face-to-face interviews with a nationally representative sample of Ukrainians over the age of 18 in the government controlled areas of Ukraine.

We asked what their president should do if pressured by the US president to open an investigation into his political opponent in return for needed US aid — similar to what Trump is accused of doing.

There is no consensus on this question among Ukrainians.

Nearly one-third believe their president should stall an investigation until after the election is over if faced with this scenario.

At the same time, 1 in 5 believe their president should take the deal of an investigation for aid.

Only a small percentage, 12%, believe their president should reject such a quid pro quo and forego the aid. The remainder did not know what the president of Ukraine should do.

Ukraine is a divided society with major regional and ethnic differences, and these divisions are reflected in how these opinions vary by region.

Support for this sort of deal was highest in western Ukraine, where 35% thought the Ukrainian president should agree to open an investigation in return for foreign aid. This strong support reflects western Ukraine’s status as bastion of Ukrainian nationalism and anti-Russian fervor.

In contrast, in southern and eastern Ukraine, where there are more Russian speakers and less nationalist sentiment, people felt differently about trading political aid for financial assistance.

Survey respondents in southern Ukraine were the least supportive of agreeing to Trump’s alleged quid pro quo. Support for rejecting it altogether was highest in eastern Ukraine.

Ukrainians are again divided on this question.

The plurality of respondents, 32%, believe the Trump administration provides the same amount of support to Ukraine as previous administrations.

But nearly one-quarter of Ukrainians said the Trump administration was more supportive, while 19% view it as less supportive.

By comparison, 66% of Ukrainians report a favorable opinion of President Zelenskiy.

To us, this suggests that Trump’s alleged quid pro quo hampers the US government’s ability to exert its influence in Ukraine. It further divides Ukraine across regional and ethnic lines and raises doubts among a significant portion of Ukrainians about how much the US will support Ukraine in its conflict with Russia.

Amplifying false narratives about the US

Narratives depicting the Ukrainian government as a puppet of the United States and its allies are commonly promoted by Russian propaganda outlets throughout Ukraine.

For example, 30% of Ukrainians believe the US and NATO orchestrated the crisis between Ukraine and Russia in order to take control of Ukraine.

Thirty-four percent also believe the West does not want the conflict in Donbas to end, in order to keep Ukraine weak.

We also showed respondents a fake news story about the US State Department special representative to Ukraine violating Ukrainian election laws by publicly supporting Zelenskiy’s opponent Petro Poroshenko in the last presidential election. More than a quarter believed it was true.

In this information environment, in which a sizable percentage of Ukrainians already believe their government is a puppet of the US, we worry that Trump’s alleged attempt to pressure Zelenskiy could further amplify these widespread false narratives among the people of Ukraine.