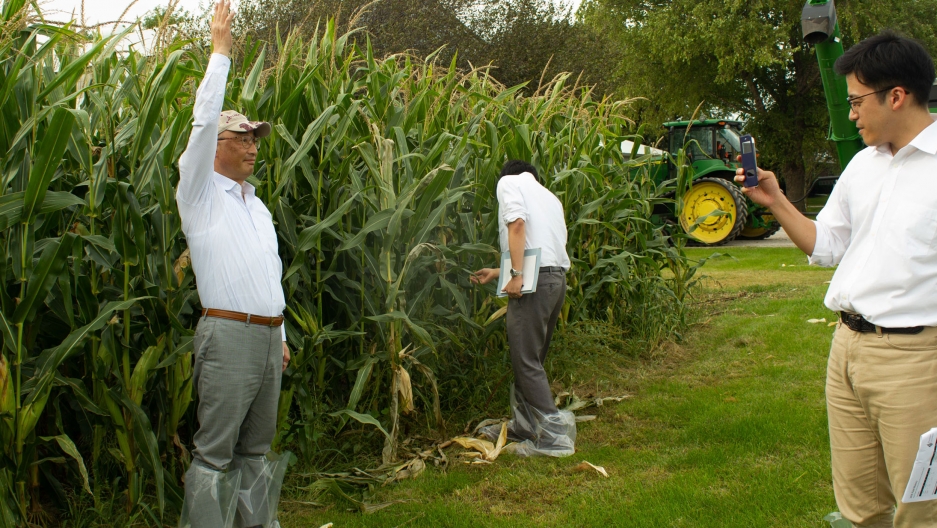 Shortly before the corn harvest began on Rod Pierce’s farm in Dallas County, Iowa, he welcomed a delegation from Japan. The visitors in September mainly came from Japanese companies and co-ops that import corn from the United States to feed to livestock.

Pierce invited them to walk into the tall rows of corn and poke their heads into one of his empty grain storage bins and to climb up into the cab of an eight-row combine.

He is doing what he can to keep these Japanese buyers happy, including soliciting feedback about the product they buy.

“Do you guys have any problems with our corn, as far as the quality?” he asked.

Related: Who's paying for Trump's tariffs? China, or American shoppers?

Thanking them for the feedback, Pierce offered that perhaps he could, in future years, grow a variety with more protein, since that is a key ingredient in the animal feed it will most likely become in Japan.

It is one way that Iowa farmers could make their corn more attractive to overseas buyers. But, what they say they really need is better access to export markets, which could happen soon in Japan. The US and Japan have signed a tentative trade deal that would open up Japan to more American-grown wheat, pork and beef.

It’s been a rare trade victory for the Trump administration, which on Friday announced small steps toward a trade deal with China, too.

The US and China reached "one of the biggest deals ever made,” said US President Donald Trump of the China deal. The deal, which Trump called phase one of the trade agreement, was a verbal deal. Trump said it would strengthen protections for American intellectual property and give financial service companies more access to China. China will also be purchasing $40 billion to $50 billion worth of American agricultural products.

The US only sold $9 billion in agricultural products to China last year, down from a high of $25 billion in 2014.

Many farm interests, including the two Republican senators from Iowa, Rep. Chuck Grassley and Rep. Joni Ernst, were cautiously optimistic about Trump’s announcement to sell more farm goods to China. They said Friday’s announcement was a positive sign, but they also wanted to have more details on the deal and see how China would follow through on the agreement.

“The President started this fire, and he should not be taking a victory lap over putting only part of that fire out. The markets we took decades to build have been lost to countries like Brazil.”

Democratic congresswoman Abby Finkenauer from Iowa said the agreement should not be interpreted as a clear win for US farmers. “The President started this fire, and he should not be taking a victory lap over putting only part of that fire out. The markets we took decades to build have been lost to countries like Brazil,” she said in a statement. (During the trade war, with tariffs between the US and China, Chinese buyers have turned to Brazil for many agricultural products like soybeans.) 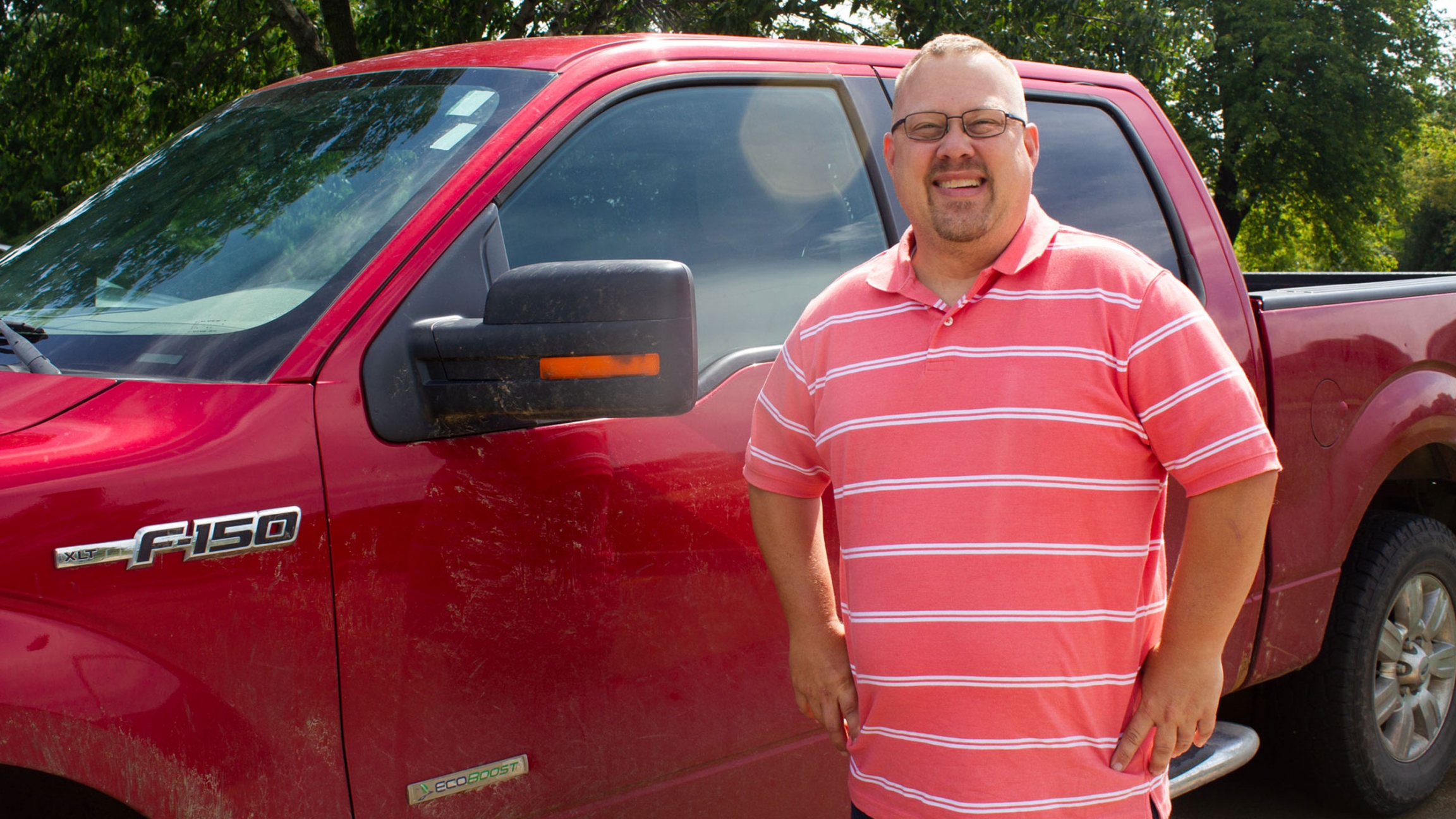 “We are good at what we do,” Fritch said. “We produce good, good products, and the world knows it.”

Michael Fritch, a farmer from Mitchellville, Iowa, says he would like to see more deals offering markets for his corn, soybeans and beef because production in the US exceeds domestic demand.

“We are good at what we do,” Fritch said. “We produce good, good products, and the world knows it.”

Fritch voted for Trump, in part because of Trump's stance on trade. In a gesture to farmers that appealed to Fritch, Trump saw China as a bad actor and promised to do something about it.

Fed up with trade wars

But when Trump slapped tariffs on thousands of Chinese goods, China punched back, leaving Fritch and other farmers looking at a vastly smaller market for their exports to China. US farmers are also struggling to sell more to the rest of Asia.

Fritch wanted to be a part of the Trans-Pacific Partnership, or TPP, a multicountry trade deal, which included access to Japan. It was negotiated by the Obama administration and US farmers generally liked the trade deal. But Trump prefers smaller, bilateral agreements, like the one with Japan. And in his first days in office, Trump pulled out of the TPP.

“It was very, very friendly,” Fritch said, “and [the] more of those free trade agreements we get, the better agriculture does.”

Trump has also thrown the North Atlantic Free Trade Agreement, or NAFTA — the trade deal with Mexico and Canada — into uncertainty. The administration revised the 25-year-old agreement, but it’s now stuck in Congress, with Trump occasionally threatening to walk away from the deal entirely if he doesn’t get his way.

Taken altogether, Fritch is getting fed up.

“Anytime you have a trade situation, the first thing that's going to get hurt is agriculture. You look back at the past, and that's how it is. However, we're tired of being pawns now.”

“Anytime you have a trade situation, the first thing that's going to get hurt is agriculture,” Fritch said. “You look back at the past, and that's how it is. However, we're tired of being pawns now.”

For some Iowa farmers, though, all of these trade deals are really beside the point.

George Naylor said nurturing international sales may be good for global agribusinesses — but not for actual farmers. He said his prices remained largely stagnant, and his expenses kept going up, even after decades of free trade deals promoted by commodity groups and multinational corporations.

“It wasn’t too long before I recognized that what they were saying was nothing but propaganda,” Naylor said. Instead of the economic laws of supply and demand dictating changes in commodity prices, politics and policy drive the prices he gets for his crops. Right now, he added, one buyer, in particular, has too much influence.

“It's actually China that's determining the outcome of our farm economy,” he said, “by levying these tariffs and scaring the markets.”

Related: Despite Trump's promises, US trade deficit with China continues to grow

In announcing that China and the US had reached a tentative minideal on trade, Trump emphasized that it would include more Chinese imports of agricultural products.

But Naylor is pursuing another path. He transitioned his corn and soybean fields to organic crops, which will fetch a higher price. He’d like to sell most of that domestically. He also added oats, hay and apples to his enterprise with the hope that diversity will make him less vulnerable to trade wars.

Still, try as they might, most farmers can’t escape this fact: We live in a global marketplace now.

For many Corn Belt farmers, harvest now means hauling their grain to the local elevator and accepting whatever price they’re offered without ever knowing whether their corn is turned into high fructose corn syrup, blended into gasoline as ethanol or fed to pigs in Japan.