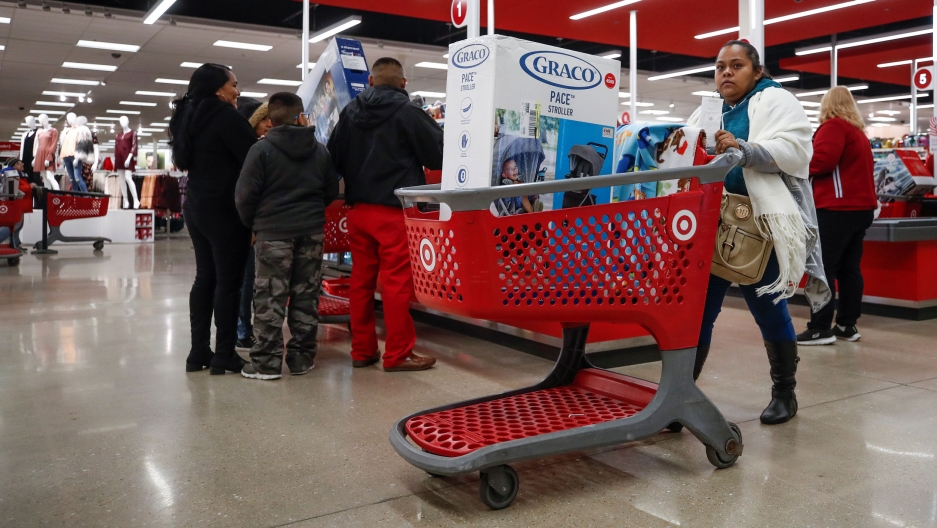 A customer pushes her shopping cart, filled with Chinese-made products, after making a purchase at a Target in Chicago.

Consider a bottle of French wine. Say the US were to impose a 25% tariff, an import tax, on a $100 bottle. The American importer would have to pay an extra $25 to get that bottle into the country.

The idea behind this tariff would be to make the French wine more expensive for Americans and, ideally, push them to start buying more US domestic wine. That's a hypothetical example. A year ago, tariffs got very real: President Donald Trump threatened to slap tariffs on thousands of Chinese imports.

At the time, David Bergman, chief executive officer of the Butler Specialty Company in Chicago, told The World that if tariffs were put on the Chinese-made furniture he imports, “I think that I will be able to pass through the tariff to my customer. I think the consumer ultimately, though, is the one that's going to have to pay more for the product. And the same is true of every manufacturer of all goods; it’s not just furniture.”

Trump disagreed. The administration put tariffs on furniture and some 9,000 other goods from China.

A few weeks ago, the president said China is the one getting stuck with the tariff bill.

“The money we have pouring in now, we’ve never had money like that pouring in from China. We are collecting billions and billions of dollars, mostly paid for by China. If you look at the 25%, a report was done where four points out of the 25% are paid for by us, and 21 points are paid for in China,” Trump said during a briefing at the White House.

Trump reasoned, presumably, that Chinese manufacturers would cover the tariff costs for fear of losing US customers.

So, what’s the reality? Did China surrender? Or, are American shoppers footing the bill?

Trade economist David Weinstein at Columbia University investigated those questions: “So, we looked at air conditioners; we looked at wooden dining room tables; we looked at space heaters. What we found is that the tariffs are passed on completely to US consumers.”

The verdict? Trump was wrong. The Chicago-based furniture importer was right.

But Weinstein and his colleagues looked at aggregate data. In other words, the big picture. Things vary for specific companies.

In a follow-up email this week, Bergman says he hasn’t been able to pass along all the costs of his Chinese-made imports — items like tables, chairs and cabinets — to his customers because there’s just too much pressure to keep prices low. In other words, Bergman's company is now making less money than it once did.

Another group of economists also examined how much more American consumers shell out as a result of tariffs. PhD candidate Patrick Kennedy at the University of California, Berkeley, who co-authored a study on the topic, says it amounts to an extra $69 billion a year “and in per capita terms, that's roughly $213 per person per year.”

“It's certainly possible that some consumers are going to be paying a lot more than that, depending on if they're buying a car or a washing machine that year.”

“It's certainly possible that some consumers are going to be paying a lot more than that, depending on if they're buying a car or a washing machine that year,” Kennedy said.

And here’s another cost to consumers: less choice.

“One of the other big gains from trade is that we get to consume many varieties of products that we wouldn’t ordinarily be able to consume,” Weinstein said. “When I was a kid, coffee came in two types — there was Nescafe and Sanka.”

Still, in today’s modern global economy, we can stand in the coffee aisle for minutes paralyzed with choice.

Weinstein says consumers often won’t notice most products disappearing from shelves, “but if you're in the market for a space heater, or you're in the market for an air conditioner or a washing machine, and you can't get the brand anymore more because the company faced the tariffs and is now out of business or is no longer selling in the United States market, that entails a real cost to you.”

The US is already importing fewer products targeted by tariffs in the past year. According to the study from Kennedy's group, product imports from targeted countries are down 31.5% since the Trump administration introduced its tariffs in 2018.

But the president says the trade war is about bringing jobs back to the United States and addressing real problems with China.

Economists tend to dislike tariffs because they’re inefficient. The US economy creates a lot of new jobs — nearly 200,000 last month, according to the latest jobs report — but not many in industries protected by tariffs. Whirlpool added 200 jobs at a factory in Clyde, Ohio, shortly after tariffs were announced. In the US steel sector, about 2,000 jobs are expected to be created due to tariffs.

And Chinese imports targeted by China — goods like furniture — are already shifting to other low-cost countries such as Indonesia and Vietnam.

But Trump says the trade war with China is close to coming to an end, and that an “epic” deal with China is near completion. Many trade experts are wary that Trump is overselling any forthcoming agreement.

When a country (USA) is losing many billions of dollars on trade with virtually every country it does business with, trade wars are good, and easy to win. Example, when we are down $100 billion with a certain country and they get cute, don’t trade anymore-we win big. It’s easy!

“China as a sovereign state is not very open to the idea of buckling under US pressure, and so they have their hackles up, we have our hackles up,” Weinstein said. “And politically, these things get very, very entrenched.”

In the meantime, expect to pay a little — or a lot — more the next time you go shopping.