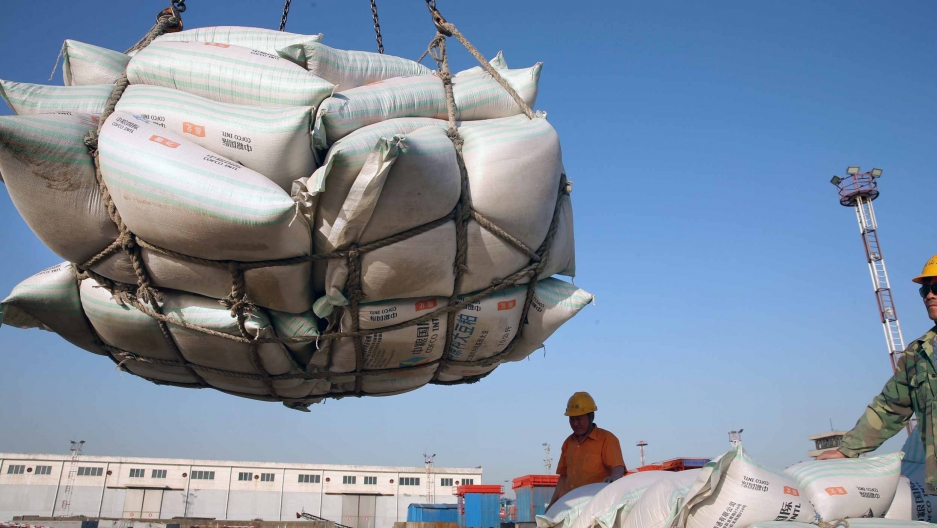 Workers transport imported soybean products at a port in Nantong, Jiangsu province, China, in April 2018. The US exports soybeans to China, but imports far more other goods than it exports.

One of President Donald Trump’s signature promises has been to shrink the US trade deficit, especially with China. So, how’s he doing?

If you think of the trade deficit with China in sound:

Each beat is a month of trade data. The steady high notes represent a continuous, and small, trade deficit in goods with China. In the 1980s and '90s, China was selling a bit more than the US was selling to them. The US trade deficit with China was a few billion dollars back then — chump change.

Then, China joined the World Trade Organization in 2001 and basically got a seat at the big kid’s table, which meant it could more easily trade more with the rest of the world. So, the trade deficit increased. In terms of our sound example, the notes got lower.

As China started selling the US more and more stuff, the US was able to sell more stuff to China, as well. But not nearly as much. Ships were coming to the United States from China overflowing with toys, computers, bikes, you name it. Those ships were returning to China about 80 percent empty. The US-China trade deficit grew to about $350 billion a year by 2016, President Barack Obama’s last year in office.

Then, Trump burst onto the scene and talked near constantly about levelling trade with China.

Despite Trump’s steady drumbeat, the US trade deficit with China reached record heights last year: It’s expected to be more than $400 billion when the final figures for December are soon reported.

So, if reducing the trade deficit with China is one of Trump’s top priorities, and the exact opposite is happening, what’s going on?

Trump’s tax cuts have forced the US to borrow more, which has driven up the cost of the dollar. A stronger dollar means imports from China get cheaper and our exports become more expensive, which makes it harder for US manufacturers to compete with foreign factories, and therefore harder for the US to narrow the trade deficit.

But wait a sec, Trump has a plan: tariffs against steel, washing machines, solar panels and thousands of goods coming from China to drive manufacturing back to the US. If only economics were that simple.

Economist Kadee Russ at the University of California, Davis, said the tariffs are creating global economic uncertainty: “And so when there's uncertainty and people start worrying about global growth, the dollar is a safe haven.”

More demand for dollars pushes up their value even more, which again, makes US exports less attractive. Here’s how the dollar has measured against the Chinese renminbi since March.

You want the pitch to be getting lower if your goal is to boost exports to China. But that’s not what’s happening.

But what could the president do to reverse this?

“Oh, there’s a lot he could do to move the dollar down if he wanted to — I’ve been a little puzzled as to why he and his team have ignored that,” said Joseph Gagnon with the Peterson Institute for International Economics.

“If he wanted to do more, he could intervene in foreign exchange markets; lots of other countries do.”

Basically, the Federal Reserve could step in to weaken the dollar. Trump could also tax foreign investment to discourage overseas investors from driving up the value of the dollar.  There are other fiscal policy tools in a presidential administration’s toolbox, if the goal is to lower the trade deficit.

“Which is basically the opposite of what he’s been doing. Instead of cutting taxes and boosting spending, he should do the opposite: Raise taxes and cut spending,” Gagnon said.

So, that’s one part of the story. Here’s the other: What does this matter? Why is Trump so focused on bilateral trade deficits?

“From an economist’s point of view, there’s no reason to think that a bilateral trade deficit is necessarily a problem,” said Russ, who was also the senior economist for international trade and finance for the White House Council of Economic Advisers in 2015-16.

Global trade is like going to the mall, where each country is a store. Colombia’s got good coffee, Japan has cool TVs, so we buy those things. The US has a store at the mall, too.

Right now, the US is buying more stuff than it’s selling. To Trump: China, Europe, Mexico, Canada, they’re all ripping off the US. Economists see it differently.

“It basically means that you are consuming more goods than you're producing,” said Russ.

“Trade is between two willing partners, both of whom are gaining, otherwise they wouldn’t engage in the exchange,” said economist Michael Klein with The Fletcher School at Tufts University.

Trade statistics are also notoriously hard to measure. For example, consider the iPhone. It’s assembled in China, but is filled with lots of parts from across Asia and the Americas. The intellectual capital — the design, engineering and marketing — mostly comes from California. Chinese manufacturers add only a small amount to the phone's overall value. On the trade books though, each iPhone that American consumers purchase is counted as roughly a $250 Chinese export to the US, skewing the trade data toward China.

For a wealthy country like the US, a trade deficit can also actually be a sign of strength — the US has the money to buy a lot of foreign goods. And foreign capital is flowing into the US to help pay for the shopping spree.

“The time that we had the smallest deficit was 2008, 2009, 2010, during the depths of the Great Recession,” said Klein, who is also the executive editor of EconoFact, a website that explains complex economic topics for a wider audience. "Times when trade deficits were larger were in the '90s, when we had very strong growth. So, it’s very, very simpleminded, and wrongheaded, to think that a trade deficit is a bad thing.”

Klein added that bilateral trade deficits — deficits with one nation — are often used “to demonize another country.”

Still, some economists argue that an overall trade deficit can have severe negative consequences, most notably, costing domestic jobs. Robert Scott argues that trade deficits are the “single largest cause” of the loss of 5 million American manufacturing jobs.

But the academic literature also suggests that China’s rise just sped things up, that American manufacturing jobs were already declining due to a range of factors including increased automation and improvements in technology. And note, as the manufacturing base in the US has shrunk, new jobs and industries have been created.

Now, most economists and politicians agree that there are certainly trade problems to address with China — like forcing American companies to share their technology in order to locate factories there. China has also built up its industries, like steel, with state subsidies, which can distort global markets and make it impossible for other countries to compete. China has also been accused of currency manipulation in the past, a difficult thing to prove. And evidence supports that China stopped the practice several years back.

But looking — or listening to — a bilateral trade deficit as a one-note scoreboard, a simple way to see who is winning and who’s losing — well, international economics, it’s a lot more complicated than that.