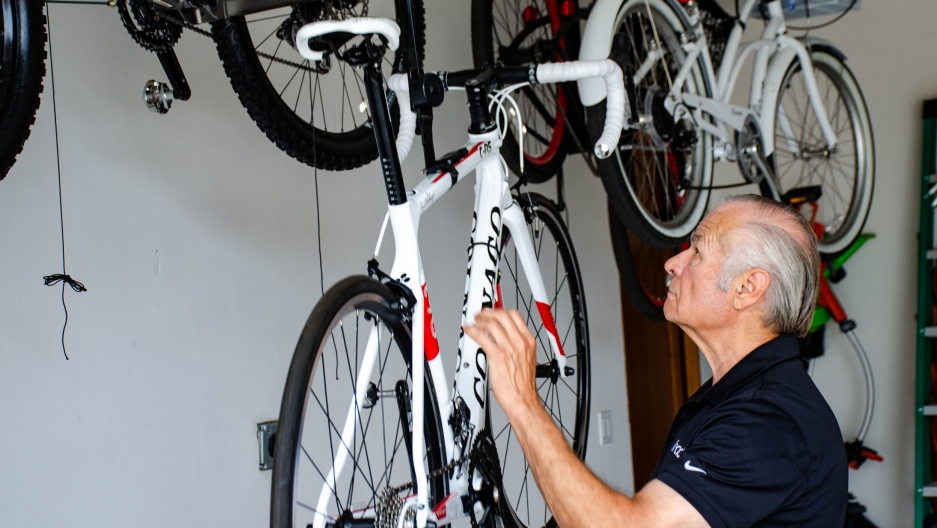 Retired engineer Robert Ozarski invented a device to easily raise and lower bikes from a ceiling. He invested $250,000 out of his retirement savings to start his company, Kradl, but isn’t sure about the future of his startup due to the US-China trade war.

Treasury Secretary Steven Mnuchin and US Trade Representative Robert Lighthizer are meeting with Chinese leaders in Shanghai Tuesday and Wednesday, and the president sounded off before negotiators sat down together.

..My team is negotiating with them now, but they always change the deal in the end to their benefit. They should probably wait out our Election to see if we get one of the Democrat stiffs like Sleepy Joe. Then they could make a GREAT deal, like in past 30 years, and continue

Trump has been trying to decrease the American trade deficit with China. He's also trying to halt the practice of forced technology transfer, requiring American companies to share intellectual property as a cost of manufacturing in China. The president's favorite negotiating cudgel: tariffs.

Far from the negotiating table, however, there are real-world consequences to the US-China trade war — some companies and people are caught in the middle, like San Diego entrepreneur Robert Ozarski.

When Ozarski turned 60, he had a massive heart attack. His doctors told him he needed more exercise. So, he decided to become a regular cyclist. Small problem: Where to store his bike in his cluttered garage?

“When I started to use my bike regularly, I did what is the normal thing; I went and got a hook, and I would hang my bike,” Ozarski said.

Related: Long before bashing China on trade, Trump teed off on Japan

But Ozarski, who is now 71, has a high garage ceiling and had to get up on a step stool to put away his bike. This was sapping his motivation. So, he bought a pulley. That didn’t work so well, either.

“What really ended it for me is when, inadvertently, the rope slipped out of my hand while I was lowering it. And the bike will just fall. So, I grabbed ahold of it to stop it, and I got a nasty rope burn on my hands. And I was like, ‘OK, there’s got to be a better way.’”

Being a retired engineer and full-time tinkerer, Ozarski began working on his own solution. Ozarski built a more refined pulley system using what’s called a constant torque spring. The bike is super easy to lower, and later send back up.

He says people saw his new apparatus, and said, “Can you make me one too?” And Ozarski realized he might have a new business on his hands. He named his new company Kradl and reached out to a bunch of US manufacturers to build the devices.

“Mostly, I never got a response at all,” Ozarski said. “And then when I did get a response the answer was, ‘Well, yeah, sure we'll do that. How many hundreds of thousands do you need?’ So, it basically closed the door.”

The guts of his product are already built in China, so it wasn’t a hard decision to expand the manufacturing search to China. He used the Chinese website Alibaba.

“I wrote what's called an RFQ, request for quotation, and put it on Alibaba. Within 24 hours, I had 10 responses from companies in China that said, ‘Well, here is our process of how we do this, and this is what it will cost.’”

In China, they were also willing to make him 100 units to see if his devices would actually sell. He says it’s been a “great relationship.” So, he opened up his retirement savings and poured in $250,000.

All was going well, and then Trump incrementally slapped tariffs on $250 billion worth of Chinese-made goods coming into the US. Ozarski’s invention made the list under the heading of a “lifting device.”

Ozarski was initially forced to pay a 10% tax to the US government at the Port of Los Angeles. In May, that border tax increased to 25%. And Ozarski quickly realized he could no longer sell his device for $140 and turn a profit. He raised his price $9, but it’s not enough, and he just isn’t sure how much further he can go.

“You can buy a hook for $5, and you can buy some of these pulley mechanisms for $20,” Ozarski said. “How much value-add does the convenience of this product provide?”

Last week, President Trump repeated a claim, which he often makes, that Americans aren’t paying the price of the tariff increases. But Ozarski’s example shows, again, that the president’s claim isn’t true. While China is experiencing some economic pain due to President Trump’s tariffs, academic research has shown that American consumers are bearing the brunt of the president's tariffs in the form of higher prices.

Ozarski has been asking his Chinese suppliers to lower their prices. And he’s also been looking to US manufacturers, again, but has run into the same problems as before.

Ozarski isn’t a fan of Trump, but some members of his family are, and he doesn’t like to talk politics. Still, what does he think of President Trump’s overall tariff strategy?

“I try to be above the fray, but I think it's the wrong approach. If you wanted to say, ‘OK, I need to do something because I think trade is unfair.’ All right, fine. But understand that the impact that you have is enormous on existing, and certainly on a startup business,” says Ozarski.

“In my case, I had product in the pipeline. What was I going to do? I had paid for that product. Hopefully I can squeeze the cost down enough where I can continue. And I'm going to run against that decision fairly soon because of the lead time for the product. So, I'm going to have to either fish or cut bait as they say.

And if Ozarski cuts bait, he will basically have a $250,000 pulley system in his garage.

“Yeah, and it’ll become in the category of bad decisions,” says Ozarski. 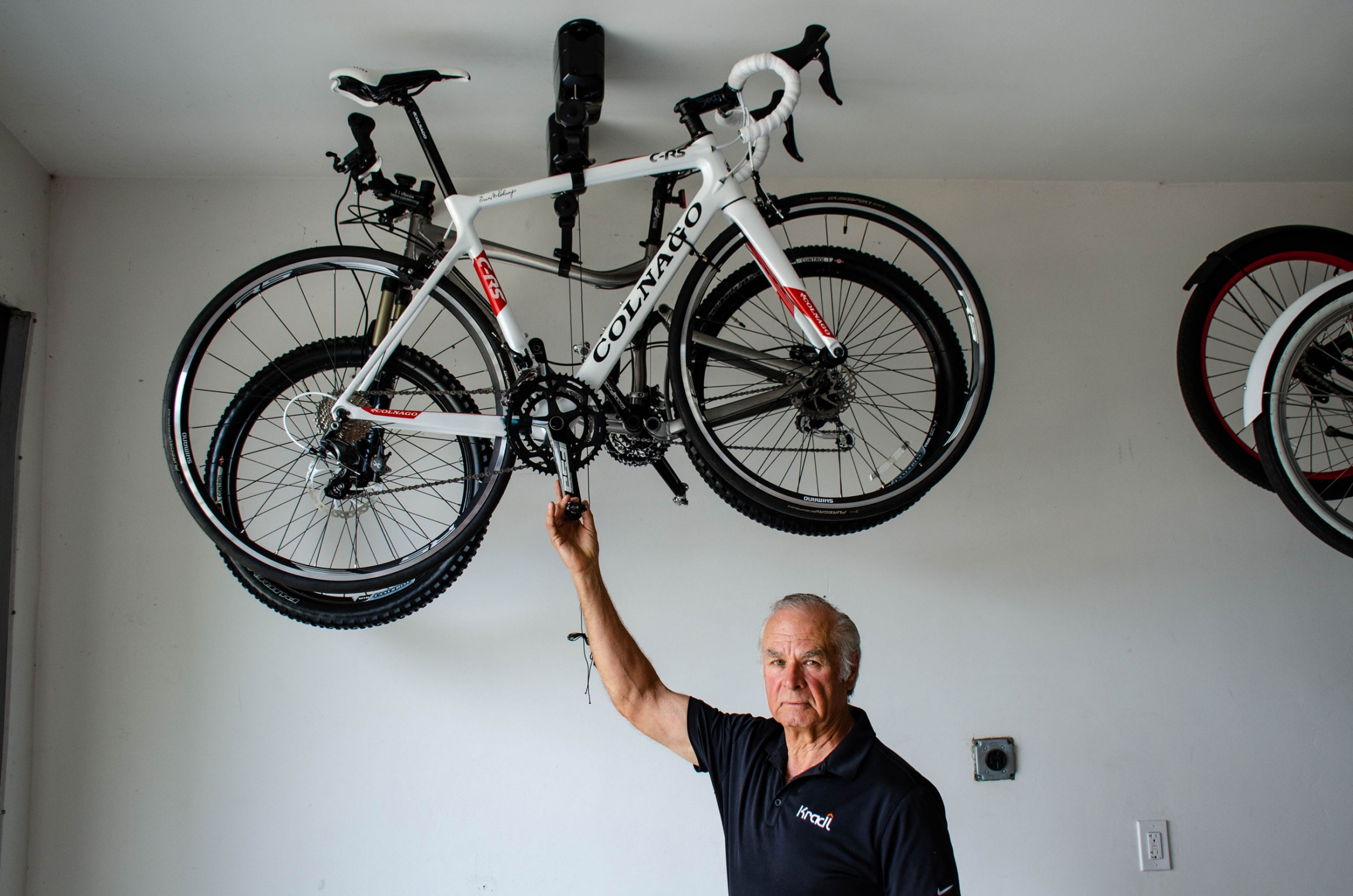 Robert Ozarski says he tried to build his bike lift in the United States, but couldn’t find a manufacturer. He quickly found a handful of willing Chinese companies.