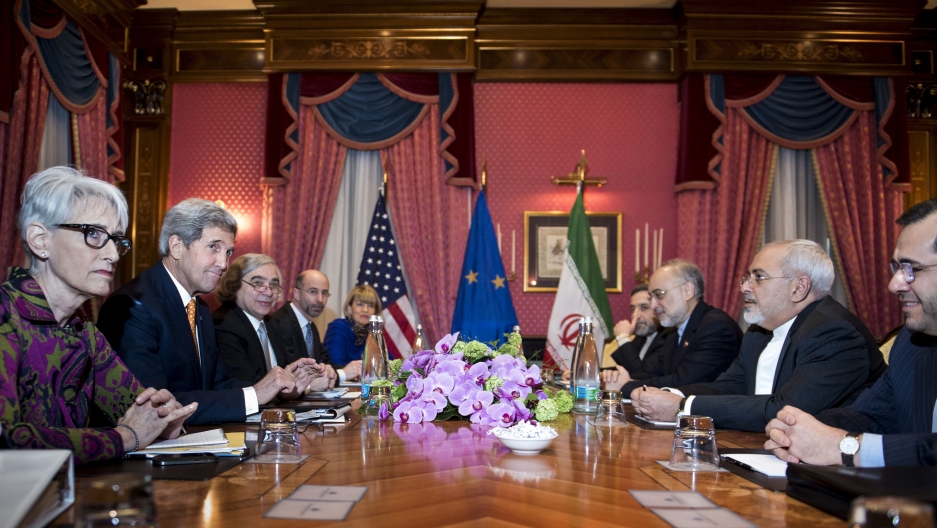 From left: US Under Secretary for Political Affairs Wendy Sherman, US Secretary of State John Kerry, US Secretary of Energy Ernest Moniz, National Security Council point person on the Middle East Robert Malley, European Union Political Director Helga Schmid, head of the Iranian Atomic Energy Organisation Ali Akbar Salehi and Iranian Foreign Minister Javad Zarif wait for the start of a meeting at the Beau Rivage Palace Hotel in Lausanne on March 26, 2015, during negotiations on the Iranian nuclear program.

Things That Go Boom is a co-production of PRX and Inkstick Media, and is a partner of PRI's The World. This season, the podcast digs into backroom negotiations and political ploys, and asks: Is American foreign policy doing its job? Listen and subscribe to the podcast to hear the whole story.

Jake Sullivan is no James Bond. He's a nice kid from Minnesota. But in his role as a backchannel negotiator, Sullivan's top secret diplomacy may have helped stave off catastrophe leading up to the Iran nuclear deal.

Diplomacy is often awkward, stymied by translators, late nights and unsecured yurt communication (yes, that really happened). But diplomacy can also stop a war, as years of secret and not-so-secret negotiations between the US and Iran proved when the Joint Comprehensive Plan of Action was reached in 2015.

One year ago, US President Donald Trump pulled out of the deal, which had rolled back Iran’s nuclear program, decreased its enriched uranium holdings and opened it up for international inspections. This month, Iranian President Hassan Rouhani threatened to retreat from the deal in response to the US withdrawal.

But how did the deal happen in the first place? Here’s a look back at some clandestine moments (and recollections from key negotiators) from 2012 to 2015 that lead to the Iran nuclear deal.

In 2012, the US and Iran nearly stumbled into war.

Iran was inching closer to developing nuclear weapons, with Israel threatening to launch an attack that likely would have dragged the US into conflict and set off a chain reaction in the region.

“If Iran actually got a nuclear weapon, that would set off an arms race across the Middle East and potentially across the world because the Saudis and the Turks and the Egyptians and others would all feel like they should get nuclear weapons,” says Sullivan, who served in the Obama administration in both the State Department and the White House.

Things That Go Boom: Nothing good happens after ‘nuclear midnight’

European and American sanctions put the squeeze on Iran’s economy. In October of 2012, Iranian currency plunged 40%, causing a national crisis. 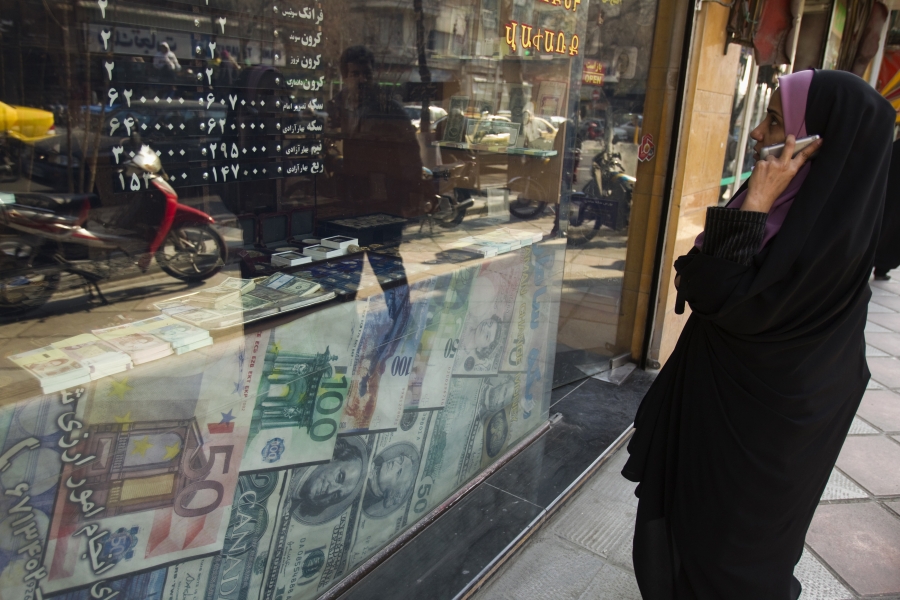 A woman looks at exchange rates by the window of a currency exchange shop in the business district of Tehran, Iran, Jan. 7, 2012.

Overwhelmingly, 74% of the American public was hoping for a diplomatic solution to the Iran issue. But months of diplomacy, sanctions, sabotage and threats had done little to halt Iran's march toward a bomb — until a last-ditch diplomatic effort proffered by the Sultan of Oman.

As then-Secretary of State Hillary Clinton's aide, Sullivan secretly traveled to Oman for an undercover meeting between the US and Iran that was set up to avert a military strike. But the negotiations began slowly.

Sullivan and his colleagues would eventually be reporting to Wendy Sherman, the under secretary of state for political affairs.

Sherman describes the negotiations as a Rubik's cube: “There were all these interlocking pieces: How many centrifuges? What level of enrichment? What facilities would be closed down? How would we verify this?”

Quickly, it became clear that Iranian expectations did not match US demands. It was Sullivan's job to break that news to Clinton — whom he found in a giant yurt in the middle of Mongolia on a tour as part of the Obama administration's pivot to Asia. 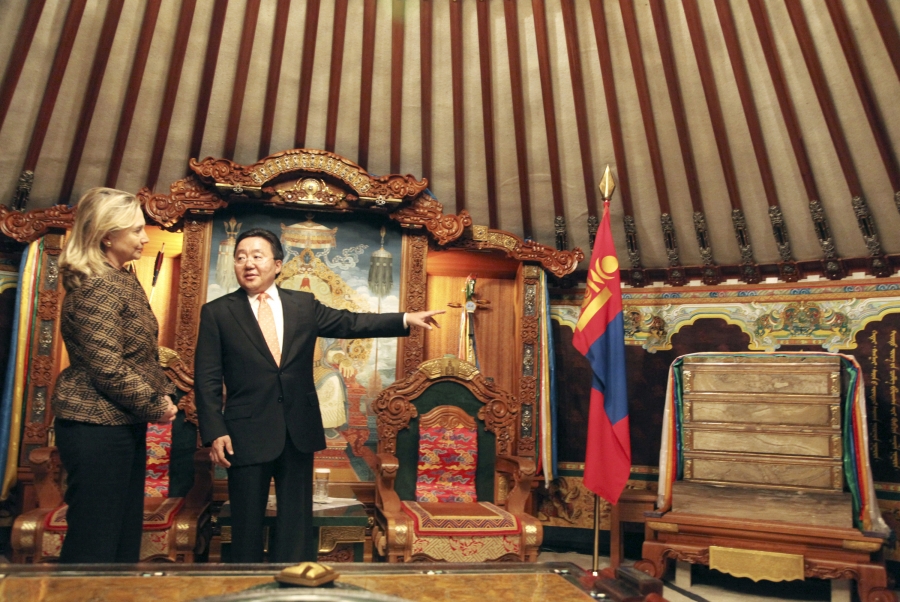 “I catch Secretary Clinton's eye,” Sullivan says, “and I speak in sort of coded, guarded language.” Because yurts are not known for secure communications.

Clinton decided to press on with negotiations — at this point, it felt like the chances were slim, but stakes were high and Iran’s nuclear program was advancing day by day.

“Having multiple countries in the most volatile, dangerous region in the world with their hands on nuclear weapons is something that puts America's security at risk,” says Sullivan, “and not just because you could have a nuclear war among those countries but because it's that much more likely the nuclear weapons would fall into the hands of terrorists.”

In 2013, Hassan Rouhani, a moderate, replaced hardliner Mahmoud Ahmadinejad as president of Iran. This helped reset the relationship between the US and Iran, and sparked a new phase of talks.

Rouhani came into office promising moderation and dialogue, and in September, he spoke on the phone with US President Barack Obama — a call 34 years in the making. 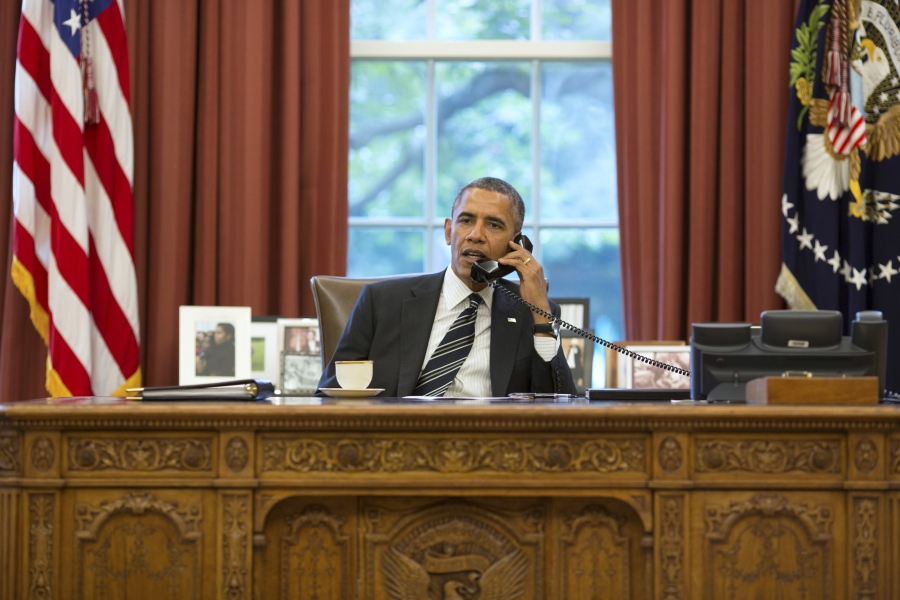 US President Barack Obama talks with Iranian President Hasan Rouhani during a phone call in the Oval Office Sept. 27, 2013.

"The very fact that this was the first communications between an American and Iranian president since 1979 underscores the deep mistrust between our countries but it also indicates the prospect of moving beyond that difficult history," Obama said after the discussion.

By then, the US’ secret negotiations were not so secret, and the clock was ticking down as Iran inched closer to enriching uranium at 20% — levels that would bring it within months of a bomb, says Ernie Moniz, nuclear physicist and then-secretary of energy.

“And if you want to go to a nuclear weapon then typically you would go to above 90%,” Moniz says. “And that's one of the reasons of the great concern. It doesn't take much more to put that material through the centrifuges and get to bomb material.”

How does uranium enrichment work? Listen to the podcast to find out.

“So, the clock was clicking, and it was clicking fast. And Iran was adding capabilities, month by month. Year by year. And that meant that the window for diplomacy was closing, and the possibility of military force, of war, was rising,” Sullivan says.

Some predicted that Rouhani, who had been involved in prior negotiations, was the figure needed to revived the nuclear deal. And by Thanksgiving, an interim deal did come through between Iran and the P5+1 (the US, UK, France, China, Russia plus Germany), putting a short-term freeze on Iran’s nuclear program and buying more time for a bigger agreement. 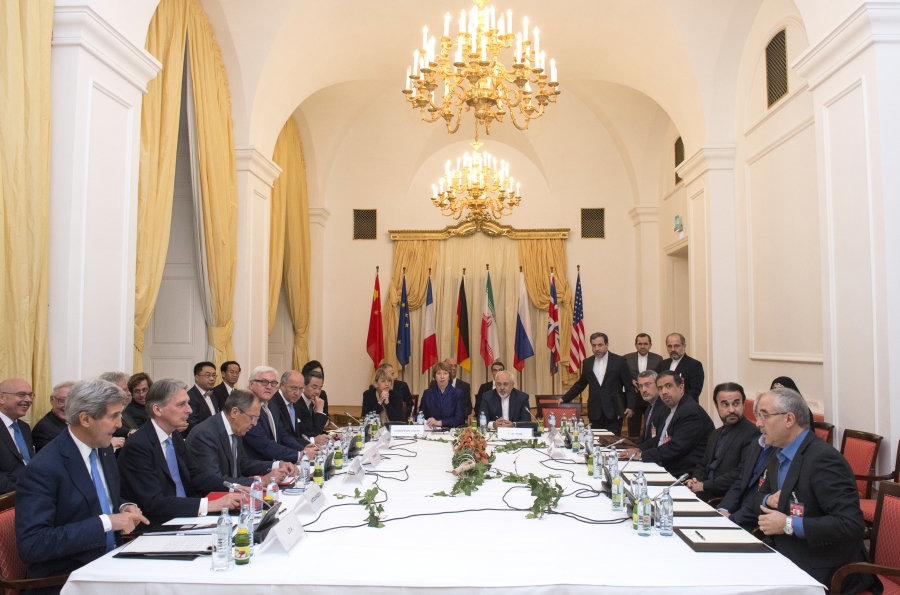 By the summer of 2015, Iran nuclear talks were in full swing, and the finish line of reaching a deal seemed in sight. Negotiators headed to Vienna, Austria, to put the deal to bed.

But diplomacy isn’t fast. And it isn’t comfortable. A week went by. Then two weeks.

“I was there for 27 straight days,” Sullivan says. “Ate exactly one meal outside the hotel.”

Negotiators were washing their underwear in the sink, and reporters were sleeping on the floor of the press tent. Two of the lead figures on the US side — Sherman and then-Secretary of State John Kerry — nursed broken bones during the negotiations.

Negotiators struggled with key issues — especially regarding the number of centrifuges Iran would be able to keep, and what to do with a heavy water facility that could produce plutonium — a potential second path to a nuclear bomb. 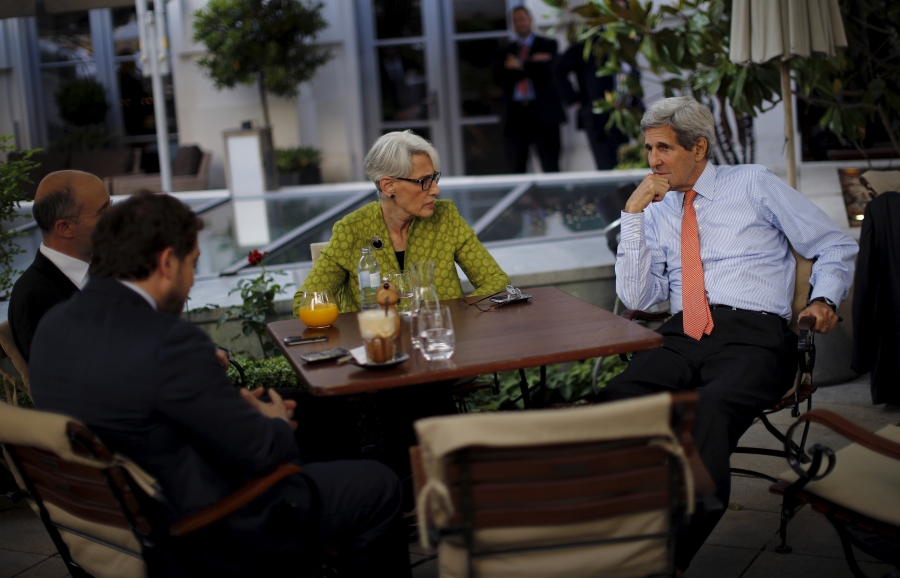 US Secretary of State John Kerry (right), US Under Secretary for Political Affairs Wendy Sherman (center), National Security Council point person on the Middle East Robert Malley (left) and Chief of Staff Jon Finer (2nd left) meet on the terrace of a hotel where the Iran nuclear talks meetings are being held in Vienna, Austria, July 2, 2015.

After 25 days and slow but hard-won advances, negotiators were confident that breakthrough was around the corner.

“We were working on what was really the last big substantive piece and that was the UN Security Council resolution and it had been a very difficult negotiation,” Sherman recalls.

They needed to agree on the terms of a new resolution covering non-nuclear issues like ballistic missiles and arms transfers. Sherman and her deputy, Rob Malley, sat down with their Iranian counterparts, Abbas Araghchi and Majid Takhte Ravanchi.

“And we were all exhausted, none of us had slept much. So we were all wiped out. And I'd put a scrap of paper on the table with some formulas I thought could work,” Sherman says.

She slowly slid the piece of paper across the table. Diplomats really do that.

“And so Abbas leaned forward. He said, ‘Okay, I think this one can work,’” Sherman says. “And I thought, ‘This is great. We're gonna get this done.’ … And then Abbas took a breath and he said in true style, ‘But one more thing…’”

How did negotiations end? And why was Iran so keen to have a nuclear program? Subscribe to the Things That Go Boom podcast to for the rest of the story and to hear which Alpine musical tour Iranian negotiators were keen to go on. Hint: ‘The hills are alive ...’