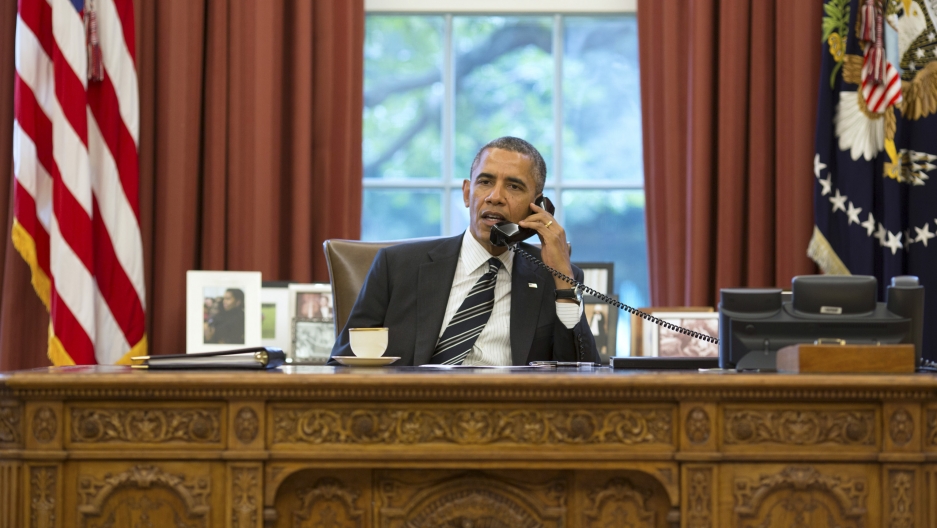 US President Barack Obama talks with Iranian President Hasan Rouhani during a phone call in the Oval Office Sept. 27, 2013.

It was the phone call 34 years in the making, some said. And 2013 was the year that it became reality.

In September, Barack Obama and Iranian President Hasan Rouhani spoke on the phone for 15 minutes.

"The very fact that this was the first communications between an American and Iranian president since 1979 underscores the deep mistrust between our countries but it also indicates the prospect of moving beyond that difficult history," Obama said after the discussion.

According to Obama, the two discussed Iran's nuclear program and they agreed to send teams to work toward a deal. Obama then reportedly apologized for the terrible New York traffic and said goodbye in Persian.

Hasan Rouhani came into office in June 2013, promising moderation and dialogue. He was a member of the team that negotiated a nuclear deal a few years back.

Some would say he was the person needed to revive into the nuclear deal between Iran and the P5+1 (United States, Russia, China, United Kingdom, and France, plus Germany who are involved in negotiating a deal with Iran).

And then, an interim deal did come through. Tehran accepted to suspend enriching uranium beyond levels needed for use in power stations and in return, it would receive sanction relief of about $7 billion.

Although the deal is not final and Iran and the P5+1 have to go back to the negotiating table to reach a comprehensive deal, it was considered a major step forward.

The change in the tone in Iran began with Iran's June presidential election. This was a key moment for Iran, since it was the first time after the contested 2009 election that Iranians went to the polls.

At the same time, eight years of Mahmoud Ahmadinejad's presidency as well as considerable sanctions on Iran's oil and gas sector, had left the Iranian economy in a dire state.

It was in this atmosphere that Rouhani talked about moderation and diplomacy with the West. Iranians voted overwhelmingly for him.

While Rouhani has been successful on the international level, there still remains a lot to be done domestically.

For example, two members of the opposition, Mir Hossein Mousavi and Mehdi Karoubi, remain under house arrest, three years on.

2014 is an important year for the Iranian president. He has much to address both on the domestic and international fronts.

But again, no one predicted a phone call between Obama and Rouhani, so who knows what 2014 might have in store.