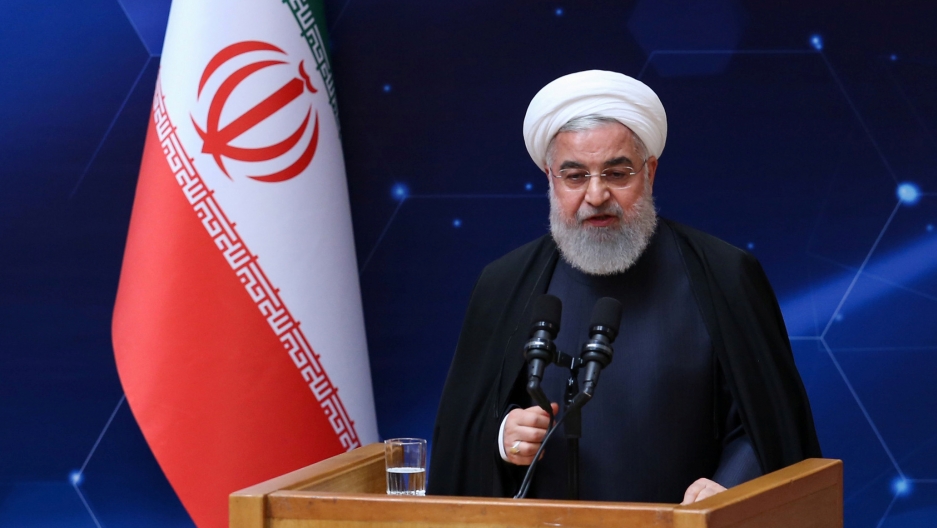 Exactly one year after President Donald Trump pulled the US out of the Iran nuclear deal, Iran announced Wednesday that it will relax some of the curbs the deal imposed on its nuclear program.

The Joint Comprehensive Plan of Action — negotiated between Iran and the US, UK, Russia, China, France, Germany and the European Union — was reached in 2015, under President Barack Obama. In exchange for sanctions relief, Iran agreed to scale back its nuclear program and agree to international inspections.

But the deal is not a legally binding treaty, Brian Hook, the US Special Representative to Iran, points out.

“I was in a meeting with Foreign Minister [Mohammad Javad] Zarif at the UN and he made it very clear that it's not an agreement. It's just a plan of action — to which we say, if it's just a plan, plans can be changed,” Hook says.

For a year after the US pulled out of the deal, Iran has complied with the terms of the agreement, even in light of renewed sanctions pressures. But on the anniversary of the US' exit, Iran is putting pressure on other parties of the deal to make up for those trading losses.

The deal works to “ensure that Iran’s nuclear program will be exclusively peaceful,” but critics have noted it fails to address several concerns, including Iran's ballistic missile program and its funding of terror groups. It also includes sunset clauses — provisions that expire, such as restrictions on uranium enrichment.

Wednesday's announcement by President Hassan Rouhani stopped short of violating the multilateral deal, but Iran warned that unless the other parties to JCPOA find a way to protect Iran's oil and banking industries from US sanctions, in 60 days Iran will resume enriching uranium beyond the low purity allowed under the deal.

Hook says it is Iran who needs to come to the negotiating table again.

“With the defeat of ISIS ... the most significant threat to peace and stability in the Middle East is Iran's foreign policy."

“With the defeat of ISIS, if you look in the Middle East, the most significant threat to peace and stability in the Middle East is Iran's foreign policy,” Hook says. “And Iran has made it very clear they don't want to talk to us. That's fine. We've made it clear that we're open to diplomacy. We've got to see a change in behavior.”

Dina Esfandiary, a fellow at The Century Foundation and Harvard's Belfer Center focusing on international security and nuclear issues, says that sanctions pressure has also backed Iran into its current position.

“What President Rouhani made clear in his announcement is that Iran has displayed a lot of strategic patience that it waited a year where it continued to implement every single thing that it had to implement as a result of the nuclear deal, while it was waiting to see whether the Europeans, Russians and the Chinese would be able to uphold their end of the bargain,” says Esfandiary. “And today, as the US is increasing its pressure on Iran and squeezing it further, Iran has basically been boxed into making the statement and rolling back some of its implementation.”

Esfandiary spoke to The World's Carol Hills about the implications of Iran's announcement.

Carol Hills: Does Iran's threat to stop complying with some parts of the nuclear deal actually change anything about what the deal was supposed to prevent in the first place?

Well, the deal was supposed to constrain and push back parts of Iran's nuclear program. So, today, Iran's announcement goes against some of that, but in a very restrained manner. The Iranian president announced that Iran would increase its stockpile of enriched uranium, but it actually has quite a bit of room for maneuver to increase it before it goes past the limits that it's allowed. And it also announced that it would increase its heavy water stockpiles, but the facility that would use those heavy water stockpiles has already been converted so that it can't produce plutonium, which is what would be problematic ultimately.

So, it can do things that would help create the materials that could create a nuclear weapon, but it doesn't have the facilities to do that. Is that correct?

"[Iran] doesn't have the capability to create a nuclear weapon to begin with."

“Yes, absolutely, and most importantly, it doesn't have the capability to create a nuclear weapon to begin with. So, what Iran would have to do, which of course is exactly what the nuclear deal addresses, is start to once again put together the raw materials in order to be able to get a nuclear weapon and then getting and making the weapon itself is a whole other process.

Iran's given Europe 60 days to either increase trade with it to try to make up for losses of sanctions or it will do these things. Is that a correct reading of it?

That's absolutely right. The Iranians have been quite disappointed by the Europeans — even the Russians and the Chinese — in terms of them holding up their end of the bargain. The nuclear deal was supposed to get Iran to constrain its program in exchange for sanctions relief — greater trade with the rest of the international community — and, of course, the US withdrawal from the deal has made that very difficult for the Europeans because US sanctions ultimately will affect European businesses and companies. So, the Iranians are threatening to make things worse, and giving Europe and Russia and China 60 days to kind of step it up and implement their end of the deal.

Give us a sense what sort of losses has Iran suffered under the sanctions.

The sanctions have been quite difficult for Iran. It has constrained Iran's ability to sell its oil, which of course was one of the things that Iran was supposed to do following the nuclear deal. It's made it very difficult for Iran to buy, for example, parts and components for its aerospace industry, which again was one of the things it was supposed to be able to do following the nuclear deal. Basically, it's made life very difficult for the Iranian economy and for Iranian businesses and for Iran's promised reintegration into the international community.

How worried are you that tensions between the US and Iran will escalate? Do you think Americans are any less safe today than they were yesterday?

“I don't think Americans are any less safe ..."

I don't think Americans are any less safe because, despite the elevation of Iran to such an important threat to the US, I don't think Iran poses a threat to America and to Americans in the US. It may do so in the region, but even that, I would argue that the Iranians don't want any kind of conflict with Americans. They know that they're not necessarily in a position to do well in a conflict with the US and so they'd rather avoid it. The problem is that the current US administration's maximum-pressure campaign seems to be setting the scene for the increased risk of either miscalculation or a mistake and eventually a path to confrontation.

Say Iran waits 60 days and there's not much trade from Europe. Does Iran even have the capacity to build nuclear weapons or is this an empty threat?

It isn't. No. Because in 60 days, if the Europeans, the Russians, the Chinese don't step it up a little bit, Iran will walk away from the nuclear deal which is exactly what President Trump did a year ago. The difference is that if Iran walks away from the nuclear deal, then it will restart all the aspects of the nuclear program that the deal had constrained. This means it will increase enrichment activity and start up a whole range of other things that it had stopped under the deal. This basically means that Iran will be able to put together the raw materials that it needs in order to make a dash towards a nuclear weapon should it decide to do so at a later stage. Now, today it doesn't have the capacity to put to these raw materials inside a bomb in order for Iran to have a nuclear weapon. But certainly, if it manages to get together the raw materials to do it, that would severely shorten the time that it would take for Iran to do that.

Well, that keeps on changing. At the moment, Iran has a lot of trade with Iraq and some of the countries that border it, largely because it's very difficult for Iran to trade with other countries. China has been a big partner, as have the Russians, particularly under the sanctions that preceded the nuclear deal. But again, US sanctions today are making this kind of trade very difficult.