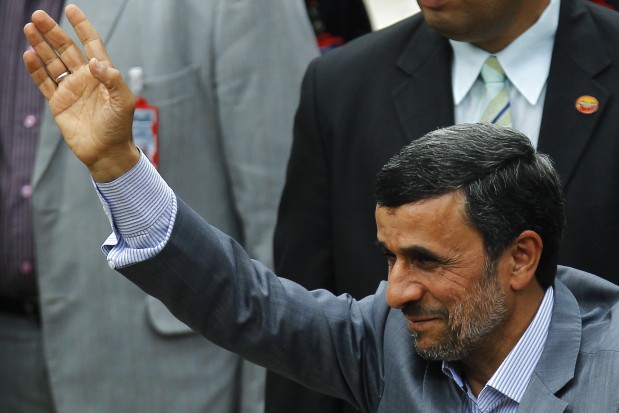 Iran's President Mahmoud Ahmadinejad waves to supporters during a ceremony to swear Venezuela's President Nicolas Maduro (not pictured) into office, in Caracas April 19, 2013. Maduro was sworn in as Venezuela's president on Friday at a ceremony attended by several countries' leaders, after a decision to widen an electronic audit of the vote took some of the heat out of a dispute over his election. REUTERS/Carlos Garcia Rawlins (VENEZUELA - Tags: POLITICS ELECTIONS) - RTXYSR0

Share
Iran's new President, Hassan Rouhani will be officially sworn into office on Sunday. He was elected early June, in what was considered as a surprise win. Now the question is what will life look like for Iran's previous President, Mahmoud Ahmadinejad? Will he go on speaking tours? Start a foundation? Well, apparently he has already made plans. Anchor Carol Hills gets the latest from Iranian journalist Shirin Jaafari. She says he's starting an international university.