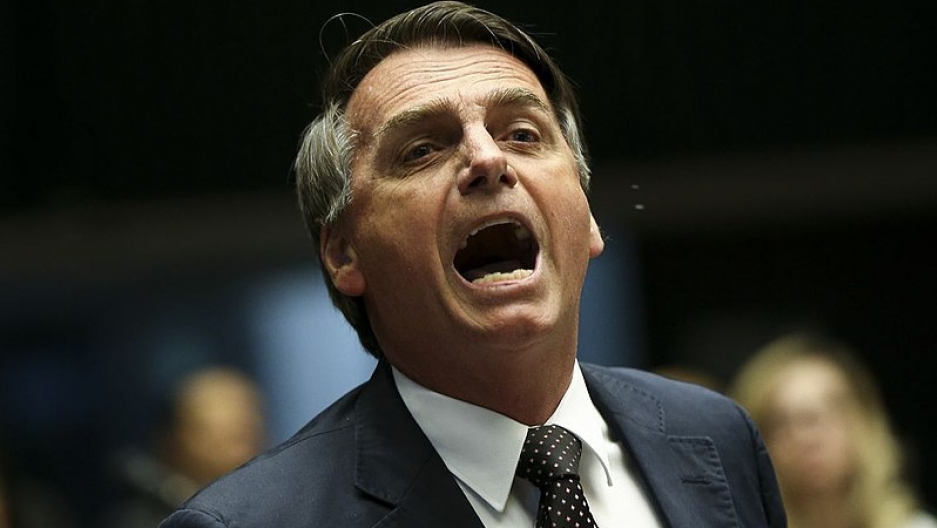 Latin America's largest democracy may be on the verge of electing a president whose campaign has been propelled by violence, vicious rumors of fraud and a cascade of online news and information that has proven to be false.

Far-right Social Liberal Party candidate Jair Bolsonaro, a former army captain who has served in Brazil's National Congress since 1991, will head to the Oct. 28 run-off vote with a wide lead amid an ever-rising tide of fake news that appears to have benefited his candidacy.

Despite having purchased only eight seconds of TV time — in a country where television ads have historically decided the winner — Bolsonaro finished the first round of voting in first place with 46 percent of the total valid votes, against 29 percent for his leftist rival, Worker's Party candidate Fernando Haddad. He is leading the latest polls with the support of 58 percent of Brazilians.

In his ascent from the fringes of Brazil's legislature to the doorway to the presidency, Bolsonaro has built a platform upon distinct sentiments of Brazil's collective psyche, leveraging a fear of communism that traces back to the Cold War-era and Brazil's United States-backed military government. His divisive, emotionally-driven campaign promises to protect national politics from corruption and city streets from criminals, as part of a return to Brazil's allegedly placid past.

Bolsonaro openly expresses misogynistic and homophobic views. He openly praises the torturers of Brazil's military dictatorship. He has called for his political opponents to be shot. He recently vowed to “put an end to all activism in Brazil." And he has declared he will not accept the elections results if he loses.

Facebook's products have figured prominently in the groundswell of support for Bolsonaro. Alongside ample coverage by regional and national media outlets, reflecting a range of perspectives on Bolsonaro and the other candidates, Facebook and WhatsApp have seen a flurry of false and misleading posts promoting the far-right candidate.

Although his campaign season has been anything but typical — Bolsonaro has barely been seen in public since Sept. 6, when he was stabbed and critically wounded at a rally by an opposition supporter — his message appears to have reached millions of Brazilians that rely on Facebook and WhatsApp as their primary venue for reading the news. He has also taken to Facebook on his own terms, broadcasting brief messages via Facebook live.

Agência Lupa, a highly-regarded fact-checking agency that partnered with Facebook earlier this year, assessed the veracity of hundreds of articles about the election that were shared on Facebook. In August 2018, the 10 most popular articles that Agência Lupa found to be false or intentionally misleading were all to the benefit of Bolsonaro. Amassing a combined total of 865,000 shares, these posts included everything from videos shared out of their original context to digitally-altered images.

Bolsonaro himself even shared one of these most popular viral posts with his 1.74 million followers on Twitter: the post featured a photo of heavily armed men behind a placard bearing a death threat to Bolsonaro. Agência Lupa traced the image back to a 2016 photo that shows the armed men, but no placard. Bolsonaro later deleted the tweet.

A VICE Brazil documentary from August 2018 interviewed an administrator of several pro-Bolsonaro WhatsApp groups who said on the record that most of the comments they share come directly from Bolsonaro's offices. While it is impossible to confirm that content shared in these groups is deliberately misleading or deceitful, an overwhelming majority of information debunked by fact-checkers during these elections circulated primarily on the closed messaging platform.

In July 2018, Facebook banned 196 pages and 87 profiles, several of which were associated with the conservative group Movimento Brasil Livre (Free Brazil Movement) and, according to Facebook, acted as a single network of distribution. MBL has played a pivotal role in the rise of online conservatism in Brazil, having led the demonstrations in favor of the impeachment of ex-president Dilma Rousseff in 2015. Several leaders of the group have officially declared support for Bolsonaro's candidacy.

All this has happened despite a pledge by Brazil's Superior Electoral Court (TSE) to take concrete measures to curb the spread of false information online in anticipation of elections.

In Dec. 2017, the court announced plans to establish a Consultative Council on Internet and Elections, under the auspices of the court. The Council would oversee the design of a tool, most likely a mobile app, for users to report suspicious content, and propose legal mechanisms to suppress the spread of fake news.

But these measures hardly came to fruition. The Council has met only twice since its inception — once in June before the campaign period began in August, and a second time on Oct. 10, after the first-round vote had concluded. The plenary court never approved any directives to guide new regulations around false information and no app or other digital tool was released to the public.

Members of the Council seem to have conflicting views about why these efforts failed. Council coordinator and general-secretary of the court's presidency Estêvão Waterloo told news website UOL that the impact of fake news on this election was not as bad as expected. “Even though people say the landscape is [worrying], back then we anticipated it would be infinitely worse," he said.

But another Council member, who spoke off the record with O Estado de S. Paulo, thought the opposite, telling the newspaper that the Court had underestimated the impact of fake news and was now “lagging behind”.

These statements suggest there may be disagreement within the Council, possibly around the balance between censorship and freedom of expression. In that June meeting, Brazil's Intelligence Agency, which has a seat on the Council, proposed “preventive” monitoring of internet users, an idea that met fierce opposition by other Council members.

The fact that three different justices have presided over the court since Dec. 2017 might have played a role too. The court's current president, Rosa Weber, said at an Oct. 7 press conference that the electoral justices are still “trying to learn what is a fake news [story]”.

Her comment speaks to the rapid pace at which false reporting and falsified multimedia content have overwhelmed online communication spaces, leaving the courts — and many members of the public — struggling to keep up.

After the meeting on Oct. 10, the Council announced it will be launching the promised app for reporting dubious news, as well as a website where users can report content to the Electoral Court. But with less than three weeks remaining until the second round vote, it is unlikely that such last-minute measures will produce any substantial effects.

Taisa Sganzerla is the news editor with Global Voices.

This article is republished from Global Voices under a Creative Commons license and part of Advox, a Global Voices project dedicated to protecting freedom of expression online. Read the original article.