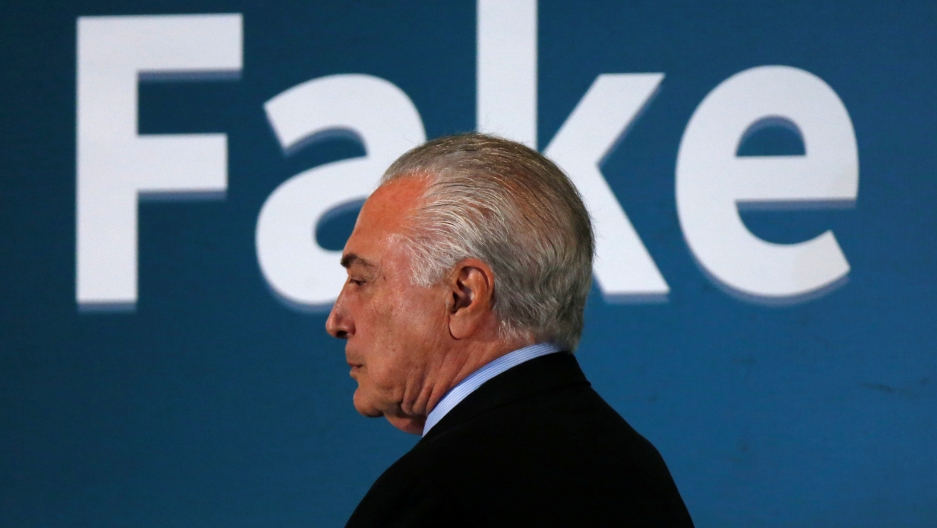 During presidential debates, the Rio offices of Brazilian fact-checking organization Aos Fatos, which translates to "To The Facts," turn into something akin to a war room. Different task forces swiftly transcribe, research and publish verifications on comments made by the larger-than-life candidates in one of the country’s most unpredictable elections in decades. 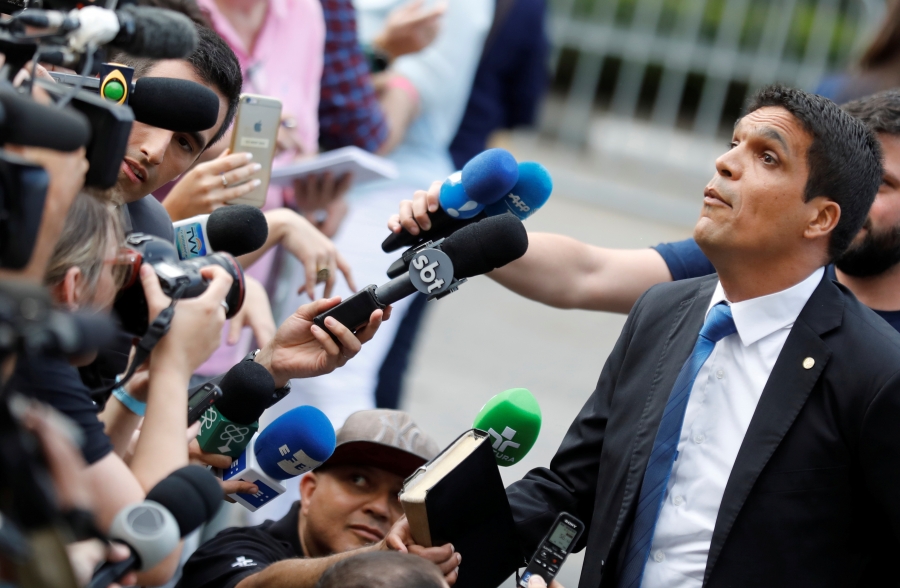 Presidential candidate Cabo Daciolo talks with journalists as he arrives to attend a televised debate in Sao Paulo, Brazil, Sept. 26, 2018.

This election, Aos Fatos’s work is being amplified by a new partner: Facebook. It is part of the social media giant’s push to assure users it is taking misinformation campaigns in elections seriously. In September, Facebook announced it was dedicating its own “War Room” in Menlo Park to preventing election interference in the US and Brazil — the latter, one of its five biggest markets.

In the past year alone, viral misinformation on Brazilian social media has included an anti-vaccination hoax about yellow fever, false instructions on when to vote and false claims that Brazilian authorities gave a Venezuelan company information that would allow it to defraud the election.

Brazil’s elections have become a laboratory for big tech companies slowly taking responsibility for misinformation campaigns on their platforms. False information can spread on social media like wildfire in the country, where 66 percent of voters have WhatsApp accounts and 58 percent have Facebook accounts, according to an Oct. 2 study by polling group Datafolha. The study found supporters of extreme-right candidate Jair Bolsonaro, the current leader in the polls, share political news on social media more than supporters of any other candidate. Bolsonaro has rallied supporters around an idea that traditional media are biased against him for what he calls his “politically incorrect” comments — praising Brazil’s dictatorship and supporting racist, sexist, and homophobic positions. 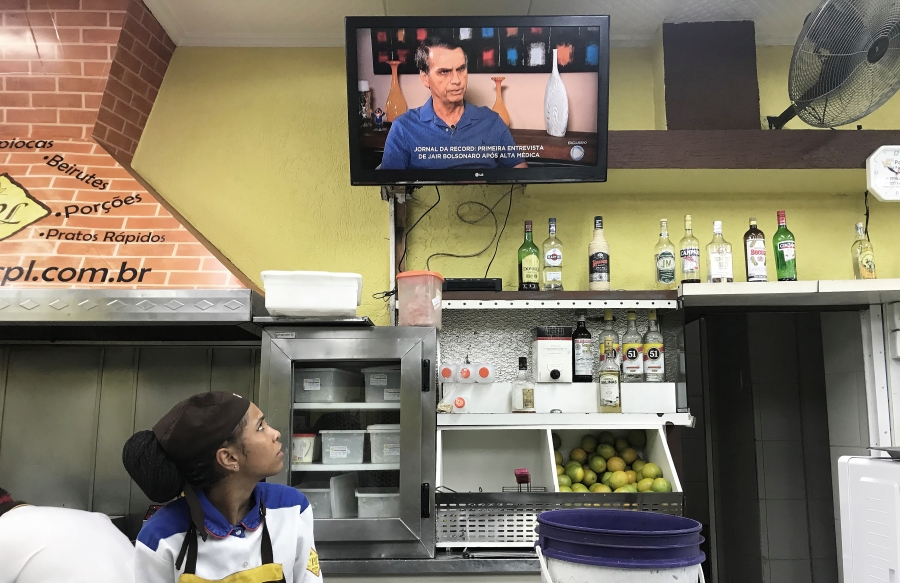 A worker watches an interview on television with presidential candidate Jair Bolsonaro at a bar in São Paulo, Brazil, Oct. 4, 2018.

Facebook (WhatsApp's parent company), Google and Twitter have all announced measures to stop deceitful accounts and news during Brazil's elections — Facebook and Google even signing a memorandum with election authorities committing to “combat disinformation generated by third parties” — but some researchers say they could and should be doing more.

Related: How social networks can save lives when disasters strike

“If they have this machine for boosting content, then they should be accountable for that,” said Yasodara Córdova, who studies misinformation at Harvard’s Shorenstein Center on Media, Politics and Public Policy.

Facebook's work against election interference in Brazil focuses “on three main fronts," said Facebook Brazil public policy director Mônica Rosina. These include removing misinformation, reducing its reach and educating users, she said. In the last three months, Facebook has taken down over 200 pages in Brazil. That included “a network that was using fake accounts to sow division and share disinformation,” Rosina told press on a call last month.

To reduce false information’s reach, Facebook counts on denunciations from users and partnerships with third-party fact checkers certified by the Poynter Institute’s International Fact-Checking Network. In Brazil, these are Aos Fatos, Lupa and Agence France-Presse. Once a fact-checker flags a link as false, Facebook says it ranks the information lower in its news feed and users who attempt to share it will first have to click past a message directing them to the fact-check. Globally, Rosina says this reduces the travel of links rated as false by 80 percent on average.

Facebook’s user education is done through initiatives like Messenger bots programmed by Aos Fatos and Lupa, where users receive advice about checking information they think may be false.

Related: How a diplomatic crisis among Gulf nations led to a fake news campaign in the United States 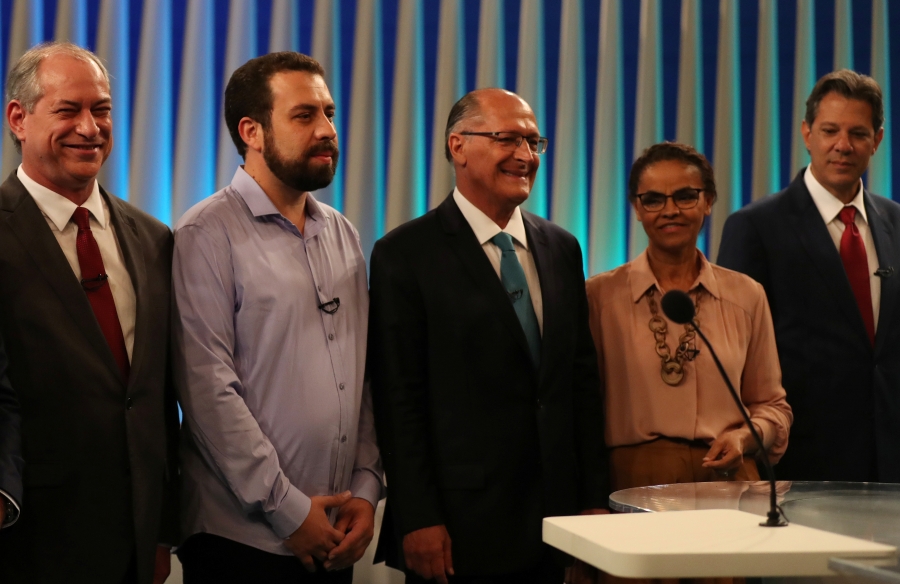 “I’m always looking things up on the fact-checking sites,” said Débora Pio, a 31-year-old researcher at a Rio nonprofit, “and I’ll check them on their chatbots, too. But I’m in the minority of voters.”

Pio says her mother and aunt, for example, do not seek out those tools. She says they frequently forward information, without checking it, on WhatsApp — Brazilians’ top method of sharing political news, according to Datafolha.

To tackle false information on WhatsApp and other social networks, Google and Facebook have funded Comprova, a partnership between 24 media organizations that checks viral information. It is also backed by Harvard’s Shorenstein Center.

Córdova, a developer for Comprova, says that though WhatsApp is more difficult to monitor than other forms of social media, “As far as I’ve seen, WhatsApp is a place that circulates pieces of information that also circulate in one way or another on Facebook and Twitter.”

She said this makes it all the more important for sites where false information is visible — like Facebook and Twitter — to be transparent about their reasons for leaving something up versus taking it down.

Comprova just issued a fact-check on a hoax about sex education in public schools, a hot-button topic for Brazil’s right, that has been circulating on both Brazilian WhatsApp and Facebook for two years, Córdova said.

It’s a criticism also repeatedly levied by the International Fact-Checking Network’s Alexios Mantzarlis, who said in one tweet, “It’s great that Facebook is seeking to ground decisions on outside research and communicating it. Greater still would be if they let outside researchers look at their data and accept independent rigorous recommendations.”

Facebook recently announced that it would be sharing some data with academic researchers through a partnership called Social Science One, where researchers can apply to conduct studies for which results will not have to be pre-approved that will not be pre-reviewed by the company prior to publication.

On Twitter, fake and roboticized accounts have played a role in online debate about major Brazilian political events since 2014, according to Marco Ruediger, director of the Department of Public Policy Analysis at the Getulio Vargas Foundation (FGV). Ruediger’s team detected over 3,000 robot accounts tweeting about Brazil’s election in the last week of September alone. Over 70 percent of their engagement, calculated the researchers, came from a network of bots supporting Bolsonaro.

Twitter has removed many bots named in FGV’s research, and on Oct. 1 published stricter rules against fake accounts, later saying in a statement, “we will continue to remain vigilant in the enforcement of our policies in Brazil.”

“I think the only way to deal with this is to widen transparency about it,” said Ruediger. Before Brazil’s presidential runoff vote on Oct. 28, he will meet with election authorities to evaluate efforts so far. Though much online misinformation constitutes a crime in Brazil, he says little has been litigated because regulators are still trying to understand the issue.

On Sunday, Brazilians go to the polls for the first round of voting. “More than any before, this is Brazil’s information bubble election,” said Pio. “I think we’ll be studying the results for years.