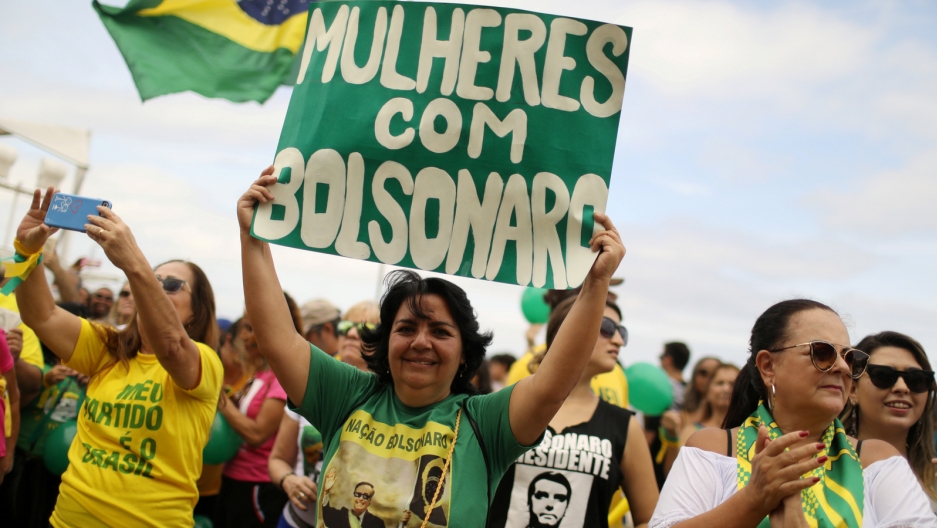 A supporter of presidential candidate Jair Bolsonaro holds a sign during a demonstration pro-Bolsonaro in Rio de Janeiro, Brazil, Sept. 29, 2018. The sign reads: "Women with Bolsonaro".

During an election-night commentary session for Piauí magazine — even before final vote tallies were in — political scientist Jairo Nicolau of the Federal University of Rio de Janeiro called this month’s election “the most impressive” in Brazil’s history.

Since Brazil emerged from a military dictatorship in 1985, its politics have largely revolved around the center-left Worker’s Party (PT), center-right Brazilian Social Democratic Party (PSDB), and the centrist Democratic Movement Party (PMDB). The PT ruled from 2003 to 2016, when President Dilma Rousseff was impeached amid a deep recession and interlocking bribery scandals that implicated much of the political establishment.

Since Rousseff’s removal, Brazil’s economic and political crises have persisted, with unemployment at 12 percent and homicides — more than 60,000 last year — on the rise.

Seven-term congressman Jair Bolsonaro, long considered a fringe figure in Brazilian politics for his extreme-right beliefs, positioned himself in the current chaos as a man on a “mission” to “rescue our Brazil,” as he said at his campaign launch. On Oct. 7, he resoundingly won the first round of Brazil’s presidential election and his PSL party grew its bench in the lower house of Congress from eight to 52 lawmakers. He now leads polls for the runoff later this month by almost 20 percent.

Brazil’s political earthquake has occurred with a significant lack of national policy debates. Before the first round of voting, supporters of frontrunners Bolsonaro and leftist Fernando Haddad concentrated more on attacking their opponents than proposing concrete solutions for the country.

Nationwide rallies against Bolsonaro a week before election day were organized under the cry (and hashtag) “Not Him.” Meanwhile, Bolsonaro supporters have ridden what Brazilian political scientists call the “anti-PT wave” – created by those who believe the PT is the main culprit for Brazil’s economic and political ills. 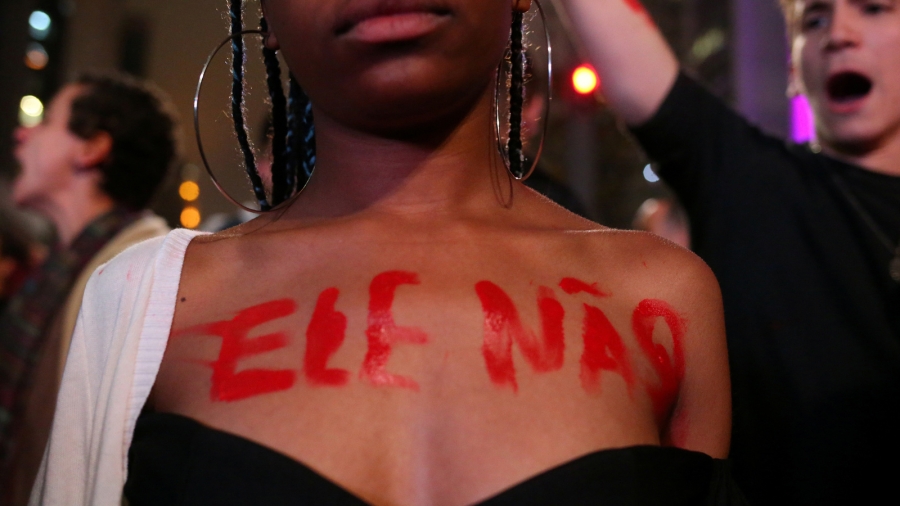 A demonstrator displays the words "Not Him" on her body in reference to Jair Bolsonaro, far-right lawmaker and presidential candidate of the Social Liberal Party (PSL), during a protest called "Against Fascism" in São Paulo, Brazil, Oct. 11, 2018.

“I think Bolsonaro is terrible. He is intolerant,” said lawyer Henriette Krutman at a recent rally on Copacabana Beach in Rio. “But in the second round of the election, I’m going to cover my eyes and my nose and vote for him.” Krutman said she believes Bolsonaro is not as bad “as the PT coming back to power.”

Bolsonaro’s intolerant comments over the years include claims that he would rather his son die than be gay and that Brazil would only change through “a civil war here, doing the work that the military regime didn’t do” by “killing 30,000” more dissidents. (Brazil’s dictatorship killed and disappeared over 400 people, according to a Truth Commission report.) He recently said Brazilians who commit crimes should not be treated “like a normal human” and that police who target criminals with “10 or 30 shots to each” should be decorated.

These stances drove the largest street mobilizations of Brazil’s election season, the #NotHim rallies, which unified tens of thousands of voters from the center to the left against Bolsonaro.

“It’s just unbelievable that we have, in 2018, to go back to what we were trying to do in the ‘60s,” said protestor and translator Patricia Castro.

Brazil’s Congress reduced the length of this election from 90 to 45 days since the last presidential contest, resulting in a decrease of policy debates on national television. Bolsonaro missed five presidential debates because he was recovering from being stabbed and Haddad missed three because he was a late-game substitution for jailed ex-president Lula da Silva. The two have yet to debate each other directly.

Bolsonaro also grew his support by positioning himself in favor of socially conservative values, said Evangelista, aligning himself with the notion that women currently have “an excess of liberty” and so do other historically subjugated groups. Women, LGBTQ, and black Brazilians are far from equal with straight white men, she said, but in recent years, they have spoken up more for their rights, leaving those who “had a voice and power” feeling “persecuted.”

Researchers from the University of São Paulo found that on Facebook, the Bolsonaro campaign pages with the largest following have focused their strategy on lines of attack akin to US culture wars. Their most-shared posts criticize feminism, the left (the Worker’s Party in particular) and mainstream media.

Bolsonaro’s appeals to social conservatism and moral values have especially resonated among working-class Brazilians who previously supported the PT but grew frustrated with the decline in their quality of life during the later years of PT rule.

“We’ve got to have a change,” said retired janitor Antonia Serra, 62, who voted for Bolsonaro in the first round.

Serra lives in Rio’s low-income neighborhood of Maré, which includes many Bolsonaro voters — and anti-Bolsonaro voters. Daily gun violence is high, and residents die frequently at the hands of both drug traffickers and police.

Some Maré residents, like 33-year-old journalist Gizele Martins, worry that Bolsonaro’s security proposals would only heighten the violence.

On Saturday, Martins resolved to debate Bolsonaro’s policies with neighbors who came to pick up clothing donations at a monthly giveaway she helps organize. She struck up a conversation with Serra in the middle of the street.

The two women discussed welfare policy and affirmative action, and eventually, Serra said that she decided she was not going to vote for any candidate in the second round. She said she was afraid that voting Bolsonaro “wouldn’t work out” to bring the changes she wants.

Truck driver Claudio Ferreira, who also stopped by the event, says he is leaning toward Bolsonaro but has a “50-50” chance of changing his mind. He supports Bolsonaro’s defense of harsher penalties for juveniles who commit crimes.

Martins says she was motivated to debate in the streets by the lack of qualified debates on television and the flood of disinformation on social media. These factors aside, she said, Brazil’s left is also to blame for losing working-class voters because they retreated from grassroots work in poor neighborhoods over the years.

Brazil’s poor and black neighborhoods “will suffer the most,” said Martins, from a Bolsonaro presidency.