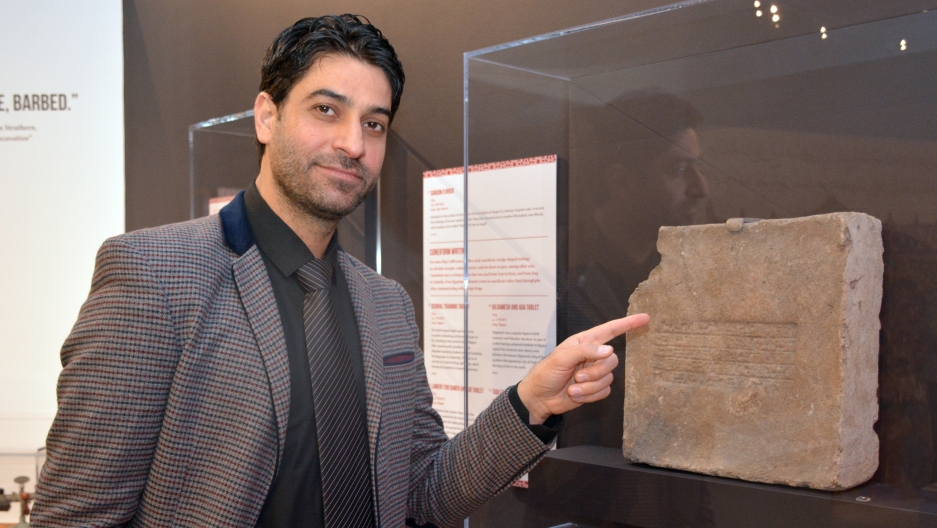 Hadi Jasim was an Iraqi translator for the US military. Now he's a "global guide" at the Penn Museum in Philadelphia.

At the University of Pennsylvania Museum of Archaeology and Anthropology, Moumena Saradar directs a group of visitors to a glass case containing an enormous gold headdress and beaded shirt — the burial garments of Queen Puabi, who died around 2550 BCE. They’re a highlight of the museum’s Middle East gallery, reopened in April after a $5 million renovation.

“Queen Puabi’s burial jewelry is one of my favorite objects in the gallery,” says Saradar, who goes on to explain that in Syria today, people still save up for gold jewelry for their wedding. She shows pictures of packed jewelry shops in Damascus, walls glittering from floor to ceiling.

Saradar is among the museum’s new tour guides — immigrants and refugees from Syria and Iraq who can make connections between the ancient artifacts and the present-day cultures.

Saradar and her family arrived in Philadelphia as refugees in 2016, and she now works as a medical interpreter during the week and gives tours of at the gallery on weekends.

In Syria, her family lived outside Damascus. “We are so proud that it's the oldest continuously inhabited city in the world,” she says. But even though very old buildings were woven into the city fabric, she says she didn’t really think about that on a daily basis when she lived there. 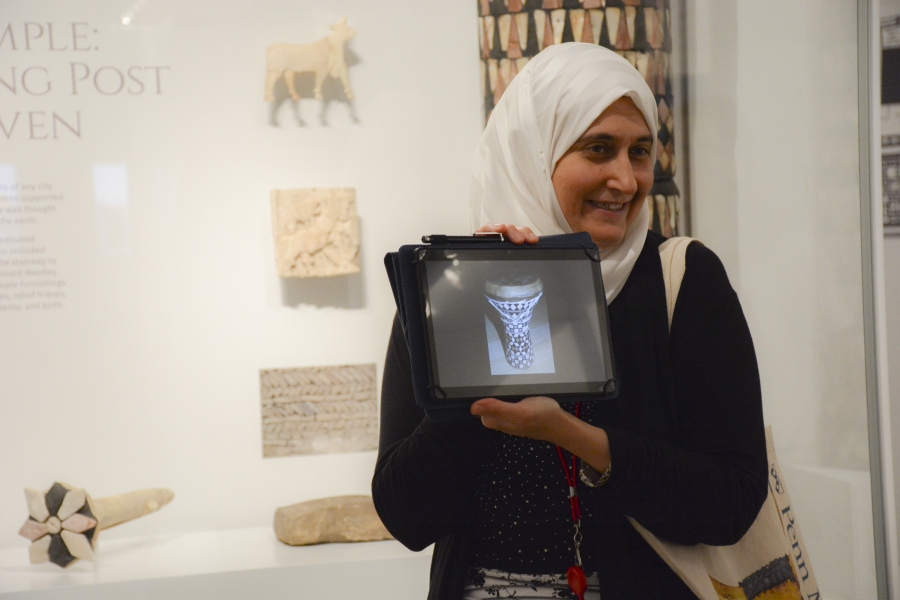 Penn Museum global guide Moumena Saradar came to the US as a Syrian refugee two years ago.

As a guide, Saradar went through intensive training to prepare her to give detailed historical tours and respond to visitors’ questions. She says she practiced on her five children.

According to Kevin Schott, the Penn Museum’s education programs manager, Saradar and the other guides offer something local docents can’t.

“At some point in almost every tour somebody will say, ‘What about today? Do they still eat these things today?' Or, 'Is this place still a place people go?’ And I'm like, ‘I don't know. I can't answer your question.'"

These guides are expressly trained to weave their own personal stories and memories into their tours — things they would feel comfortable talking about over and over again.

Another guide, Hadi Jasim, spent his summers as a child at his grandfather’s house in southern Iraq, near the source of many of the objects in the gallery: the ruins of the ancient city of Ur.

Related: A new book tries to help more Americans understand what it's really like at war in Iraq and Afghanistan

But when he got older, he started wondering about the lives of the people who had built the structures. “I was visiting those sites and [I would] sit there for hours just to think about maybe I'm sitting on a spot somebody was sitting on 6,000 years ago.”

Fresh out of college near the beginning of the Iraq War, Jasim became an interpreter for the US-led coalition forces in 2004. He went on to work for the UN in Iraq doing communications and anti-trafficking work. In 2017, he finally received permission to come to the United States on a Special Immigrant Visa for Iraqis who worked with the US military.

Now, Jasim has a job in food service at a local hospital. He says the museum work has become more than a second income.

“Sometimes, even if I don't have tours here, I just show up to work, go through the Middle East gallery, go and see the clay tablets and see the carvings," he says. "It just brings my memories back.”

Jasim and Saradar have both been asked by visitors whether these antiquities belong in a Western museum. Saradar says she usually responds by talking about how the objects in the Penn Museum were excavated a century ago by university archaeologists, under a shared agreement with local governments.

And Jasim tells me this: He’s deeply upset about the damage to Iraqi historic sites that occurred during the war and by ISIS and looters. It gives him some comfort, he says, that some of his heritage is being preserved here — and so nearby.

“Being close to your heritage is something that makes you feel like okay, now I'm back. You know, I don't feel like I'm a stranger [any] more.”

Jasim will have more colleagues joining him at the museum in the future. The Penn Museum plans to hire guides for all of its global galleries.