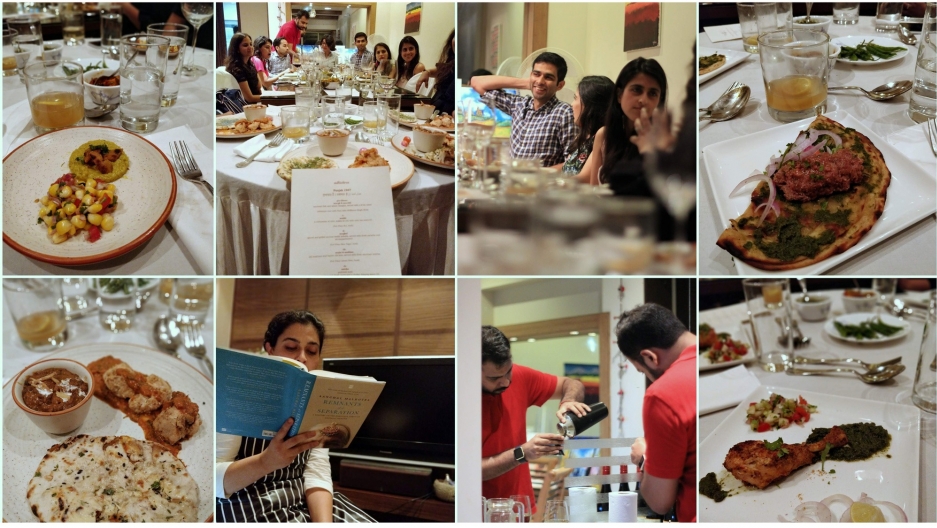 India and Pakistan have fought four wars and threatened each other with nuclear weapons for decades. Like most neighbors, they have differences — primarily in religion — but they do overlap in some areas, such as language, dress and, of course, food.

The universal cuisines that unite these two countries are being celebrated by one woman who has made it her mission to serve what she calls “bordered menus.”

“We essentially eat good food, tell a few stories, and … sort of explore the conflict from a lens other than facts, figures and news channels,” she explains.

Earlier in August, a few days before India and Pakistan celebrated their 72nd Independence Day, I attended one of her dinners at a swanky apartment that had been set up with gleaming silverware to host 18 hungry people.

The cuisine was from Punjab, a province that in 1947 was divided between Pakistan and India. In the wake of that partition, Hindus fled to what is now Indian Punjab and Muslims moved to what is now Pakistani Punjab.

Kashyap has always been interested in the history of food — why we eat what we eat, why we have access to the foods we do.

“We eat food based on the land around us. We draw borders on the lands around us and we otherize the people who live the closest to us even though they are most similar to us,” Kashyap remarks.

Over the last year, Kashyap has held these dinners in London, Vancouver and now in Mumbai. Her cooking is all over the map. She’s done three menus showcasing India’s borders with Pakistan, Bangladesh and China. But she’s also presented food that emphasizes the conflicts between Israel and Palestine and the US and Mexico as well as the civil war in Sri Lanka. There are 30 other menus she has yet to unveil.

But the dinner I attended was personal for Kashyap. Many of the recipes and their stories came from her own family or friends from Pakistan.

Between courses, Kashyap explained the origin of the dishes and busted stereotypes. For instance, as we sampled our appetizers of corn mash cooked in mustard oil and served with corn flour flat bread, she explained that while most people associate Punjabi food with being very heavy on the cream and meat, most people in the region eat very simply. The common assumption that only Muslims eat meat and Hindus are vegetarian may be true in the cities, she said, but in the villages, corn and mustard are staple crops that everyone eats.

Maps and photos from pre-partition India were passed around. There was also a quiz that tested our knowledge of the region. Without googling for answers, teams had to figure out things like which city was considered the region’s cultural capital (Patiala) and how long Sir Radcliffe took to draw up the border between the countries (five weeks).

Many of the guests had stories about their own families fleeing war and violence, which led to other questions about where refugees ended up, the things they were able to carry, how they started again from scratch.

The stories resonated with me in particular. Both sets of my grandparents moved to India from what is now Pakistan.

In fact, my father was born two years before the partition, and his passport still says “Place of Birth: Lahore, Undivided India,” which gets him pulled aside at every international airport.

When I visited my grandparents in New Delhi, we never spoke about hatred between Hindus and Muslims, Pakistan and India. My family just spoke of their homeland with nostalgia, remembering friends and places they’d left behind. I’d wanted to see if Kashyaps message of “same, same but different” — how the people on either side of a border conflict are actually more similar than they know — would really fly.

At the dinner table, it seemed like curiosity trumped any possible hostility.

Arhan Bezbora, who traveled three hours from the city of Pune for the dinner, was drawn to it not only by the idea of a curated menu, but also the stories that accompanied each dish.

“I don’t have a direct link to Punjab, but obviously independence and Partition are things so many of our grandparents have experienced” he said. “I grew up listening to stories about those times, so I think there are some things that are shared whether you’re from Punjab or not.”

By the end of the evening, guests leave with a full belly ...“but people also leave with having spoken to at least one or two new people, learned more about the region, and piqued their curiosity,” she said. “And really this idea that we are all the same ... one of my goals is to really highlight that.”

For those who need convincing about food, taste, and enemies, Kashyap has more dinners about borders lined up.

This is a dish inspired by Mughal tradition, famous for its use of whole spices and rich tomato based gravies. Shahi, the Persian word for "gold coin," came to mean royalty in Urdu and Hindi. Shahi Paneer is appropriately luxurious, with a rich cashew paste and a healthy dollop of double cream.

For the base paste

For the Shahi Masala

1. Soak the cashew nuts in ½ cup of warm water for at least 20 minutes. Blend the cashews and water to a smooth paste and set aside.

2. Soak the strands of saffron in the warm milk for about 15 minutes. The milk should turn a bright yellow from the saffron. Set aside.

Making the base paste

3. In a frying pan, sauté the onions on a low heat till translucent, about 5-6 minutes. Add in the ginger and garlic and sauté for another 2-3 minutes.

4. Add in the cardamom seeds and cinnamon and allow to cook for 4-5 minutes.

5. Turn the heat up to a medium setting and add in the chopped tomato. Cook for 2 minutes.

6. Allow the onion and tomato mixture to cool down for about 10 minutes. Now blend to a smooth paste. Add the water as needed to create a smooth paste-like texture. Set aside.

7. In a heavy-bottomed, non-stick pan, fry the cubes of paneer in the ghee until they have a nice brown speckle on them and set aside.

8. In the same pan, heat the base paste allowing it to sizzle on medium heat for about three minutes so that it reduces and thickens. Add in the tomato puree and let it all cook together for a couple of minutes, stirring continuously, making sure you scrape the bottom of the pan well.

9. Add in the black pepper, Kashmiri chili powder, coriander powder and salt to taste and let cook for four minutes on a low heat.

10. Now mix in the cashew paste with an extra cup of water and mix in the saffron and milk mixture. Let this cook on a low flame for 7-8 minutes, stirring continuously.

11. Add the garam masala, kasoori methi and most of the double cream (save a few spoons to garnish). You may have to add a little more water or allow the mixture to thicken to your preferred consistency. The sauce should be full-bodied and fluid, like a béchamel sauce. Bring it to a boil and then turn the heat down to simmer. Adjust salt as needed.

12. Mix in the pieces of paneer and let it simmer for about 7-8 minutes, stirring frequently.

13. Garnish with a sprinkle of cardamom powder, a dollop of cream, a handful of coriander leaves and a pinch of kasoori methi.

Panjiri, the way Chhavi’s grandmother made it

No dessert could ever be healthy, but looking at just the ingredients of this one, it may not be too huge of a stretch to say it’s almost nutritious. Well, for a dessert. This is an all-weather favorite, but since it’s served warm, it’s especially delicious on a cold night. Substitute whatever nuts and seeds you have on hand, but almonds and lotus seeds (also called fox nuts or gorgon nuts) are traditional. It’s eaten in the winter on both sides of the India-Pakistan border and is strongly associated with the Hindu festival of Diwali.

Note: In both countries, it’s considered prime postpartum food for lactating mothers. My grandmother made it for my mother after both my brother and I were born.

1. Roast the almonds, melon seeds, and lotus seeds either in an oven or by dry roasting on a griddle until golden or crisp. Set aside.

2. In a heavy-bottomed pan or Indian kadai, roast the dry whole-wheat flour on a very low flame, about 12 minutes, stirring continuously with a spatula. You’ll see the color darken and smell an almost nutty aroma.

3. Add the ghee and stir until it’s absorbed.

4. Add the nuts and seeds and continue roasting for about five more minutes.

5. Take the pan off the flame once you’ve checked the mixture doesn’t smell or taste raw anymore.

6. Finally add in the sugar and powdered ginger. Throw in the raisins if using. Mix well.

It will look like coarse crumble or pie topping, but so satisfying by itself. You can enjoy it directly off the stove or cool and store in an airtight container.
Note: Some families use powdered sugar but my family likes the slight crunch of the crystals.