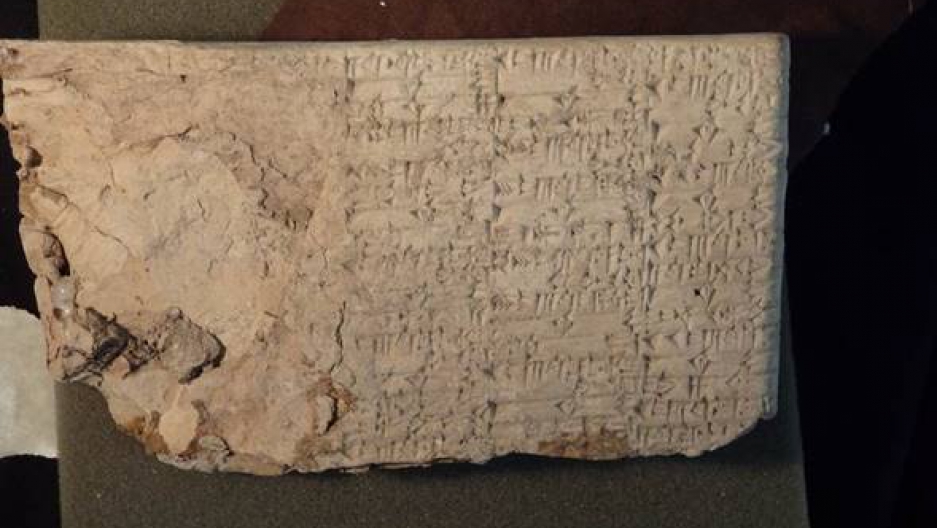 One of the cuneiform tablets purchased by the Greens is shown here. The Justice Department says it was smuggled from Iraq.

The US Department of Justice

It won that case, based on religious grounds. Hobby Lobby says it's guided by its Christian beliefs.

The owner of Hobby Lobby, David Green, has one of the largest private collections of Biblical artifacts in the world. It's that last part that got him in trouble. Hobby Lobby has just been caught buying up thousands of ancient cuneiform tablets that were looted from Iraq.

Federal authorities said the company ignored a series of "red flags" that the objects were stolen and fined them $3 million.

Hobby Lobby put out a statement saying it did what it did out of a passion for the Bible and "did not fully appreciate the complexities of the acquisitions process," resulting in "some regrettable mistakes."

But Donna Yates, a lecturer in Antiquities Trafficking and Art Crime at the University of Glasgow, doesn't buy it.

"You can't collect antiquities on the scale of the Greens without certainly buying a lot of loot," she says. "It's common knowledge."

Yates says we're talking about a massive scale — over 5,000 antiquities. "There's no place for it to come from in a legal way."

"There are very few antiquities on the market that can be shown to be absolutely legal, especially Iraqi objects. We're talking about objects that would have had to have left Iraq maybe 100 years ago for them to be fully legal. And there are just so few of those. So, if somebody comes up to you saying they have 3,000 Iraqi tablets to sell you and we didn't know about them beforehand, you should really expect that they're loot."

Hobby Lobby's claims that it's new to these kinds of acquisitions and "imprudently relied" on the wrong dealers and shippers, Yates says, are classic excuses. "It's pretty typical for the response of the collector who has been called out to say, 'The law was complicated, and I didn't understand it.'" She says the illegal antiquities trade thrives on "plausible deniability" — not asking too many questions and not investigating opaque business practices. "But of course, not understanding the law is not an excuse."

In this case, prosecutors say that Hobby Lobby consulted experts who told them that the artifacts could have been looted. But they went ahead with the purchase anyway.

Why did they do it then?

Hobby Lobby didn't return The World's request for comment on this issue, but Yates says there's a lot of research into why collectors engage with the illicit market. "They see themselves as saving the antiquities. They create this internal story where 'the antiquity would have been destroyed if I didn't collect it.' Or 'the Iraqis can't protect it. But I can, because I have that ability.'"

"It's a total construction around justifying what is absolutely a crime."

Correction: A previous version of this story implied that Hobby Lobby purchased the Biblical artifacts with the intention of putting them in the Bible museum. Green purchased the artifacts before acquiring the museum.