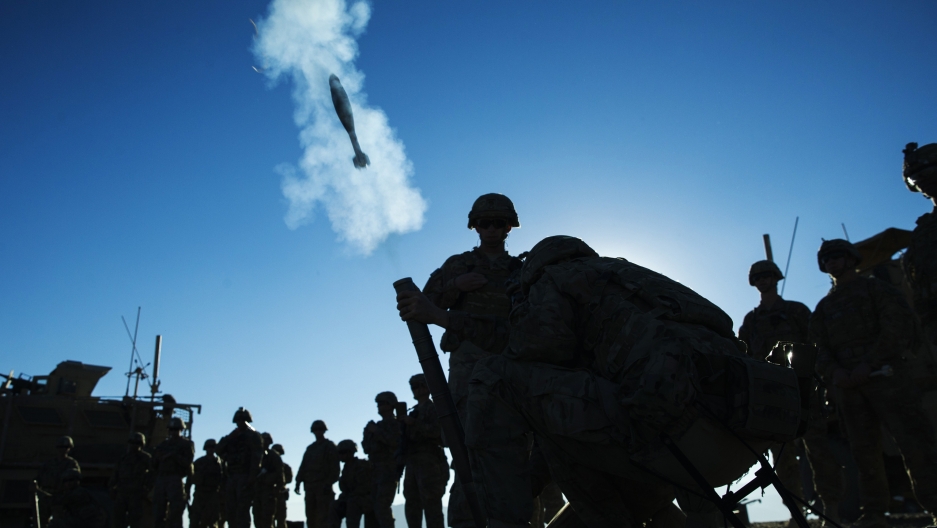 A mortar flies out of a tube during a mortar exercise for US soldiers in the Laghman province of Afghanistan, Dec. 26, 2014.

C.J. Chivers' new book grapples with the human toll of the wars in Afghanistan and Iraq.

In "In The Fighters: Americans in Combat in Afghanistan and Iraq," the New York Times journalist and former Marine infantry officer tells the story of six combatants, including Spc. Robert Soto, a soldier who initially impressed Chivers with his optimism.

"He was nobody's archetype of a fighter. He had an enormous smile, which came to him almost unprompted. He liked to sing and he sang often. His memory had at its command a vast repertoire of lyrics — R&B, rap, hip-hop, the blues," Chivers says. "Robbie Soto joined the Army upbeat — fast with that grin. The guy who made others feel good."

Chivers says "Robbie went from idealist to realist inside of six weeks." He arrived in July and by September he'd lost his squad leader and one of the soldiers who had a previous tour in Iraq who he looked up to most.

Soto now lives in New York and is a songwriter and rapper. Chivers says Soto's working in child care to earn money for late-night recording sessions.

Chivers spoke with The World's Marco Werman about Soto and other soldiers, Afghanistan, Iraq and the toll the ongoing military conflict continues to take on the soldiers who fight those battles.

"To me it's important when we talk about Robbie to realize that he was a young child when the World Trade Center was attacked and he wanted to protect New York City from another attack," says Chivers. "And not long after joining the army and arriving in Korengal Valley, he could not draw a line to what the day-to-day life of his platoon was to making New York City safer."

Marco Werman: That point of view kind of hits me throughout the book — the extent to which these soldiers and these Marines feel as though their leaders are incompetent. Soto says his superiors got him on the other side of the world — on this mountain — fighting these guys and they don't even know what they're doing. That's a big indictment.

Tell us about Navy pilot Lt. Cmdr. Layne McDowell and what has haunted him since 1999.

Layne is different than Robbie in that he had joined before 9/11. He was a Naval Academy midshipman who excelled academically and athletically and found himself in flight school and became an F-14 pilot. He had a lot of war experience before 2001, before the attacks on 9/11, including in Kosovo. He was, as a lieutenant, very involved in the bombing in Kosovo for a few months. One of those bombs he believes may have hit a civilian home and he has been thinking about that for decades.

And yet McDowell's superiors aren't worried about these possible civilian deaths, are they?

At that moment, they weren't especially worried. Layne saw that moral gap. He actually wanted to be reprimanded or to have what he thought was likely a mishap examined so that its causes would be understood. So that, maybe, perhaps, changes could be made. That wasn't the attitude of his bosses — it was more like "we need to get back out and hit tomorrow's target list."

(McDowell remains on active duty. He's a staff officer for Alaskan Command and hopes to retire in Alaska, where he and his family have a home.)

I'm just curious, among the lower ranks, how widespread is the view that higher-ups are disconnected from what really happens on the ground? How much are they talking about this?

Many of the higher-ups now do have experience on the ground in Afghanistan and Iraq and they certainly are alert to what people have come home with. But I would also say that there is a feeling — I don't want to speak for all vets but there is a prevalent feeling — that the wars have been adrift for a very long time and that all of their tactical and personal efforts — all of the years poured into this by the rank and file weren't really connected to realistic ambitions or thoughtful strategy.

You've got this amazing quote opening the book. "America is not at war. The Marine Corps is at war. America is at the mall." It was written inside the wall of a government center in Iraq in 2009.

Almost a decade ago. This isn't a new sentiment. You know, about 3 million people have been to the wars in uniform, which is less than 1 percent of the country. And I did feel a certain obligation to try to close that gap. So there is a lot of things that happened in this book that will make a reader uncomfortable. And there's a lot of moral grey.

Have you gotten any feedback from people at the Pentagon about the book?

Officially, no. Unofficially, every day. Many of those people are unable to speak their feelings publicly. Some of them operate as insurgents within the system. No small number of them are in touch with me and they're very grateful that the rank-and-file voices were channeled. They are grateful that the book tried to capture actual combat experiences.

Honestly, I got anxious reading this book. It's not easy reading, but I doubt you wanted it to be easy. You're a vet yourself, I know. I also know you have kids. Imagine one of them comes to you and says they're ready to enlist. What would you say?

One of my sons is 18 — he'll be graduating this year and he has expressed an interest. He had expressed an interest in enlisting in the Marine Corps. And it's their decision. Each young person has to make the decision whether or not the military would potentially be something that they would serve for four years or for a career. But I would say that, right now, I do line up as a discouraging voice, having seen great human energy applied to unrealistic and sometimes senseless strategies.