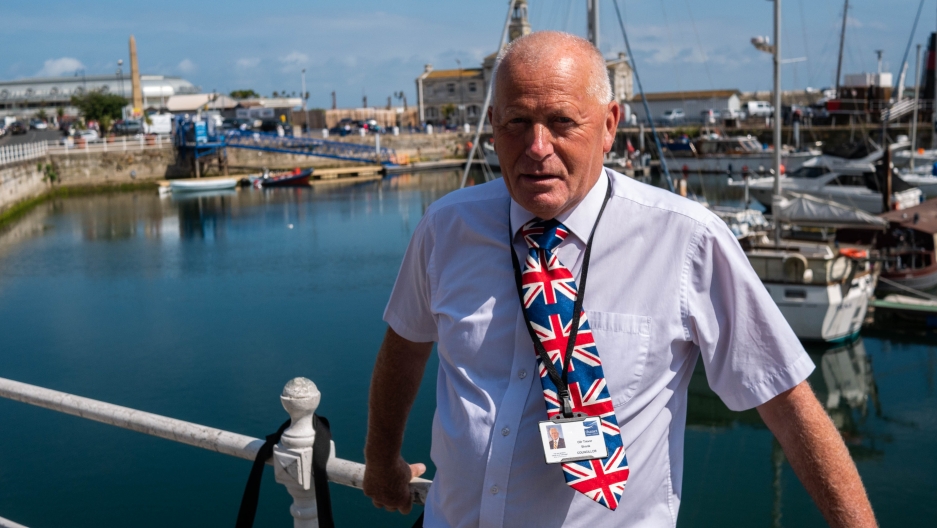 Trevor Shonk is mayor and city councillor in Ramsgate, a town on the coast of Kent, just across the English channel from the shoreline of France.

In small English towns like Ramsgate, the job of mayor is mostly a ceremonial one. The leader is not supposed to be mucking about in politics.

But Trevor Shonk, mayor of the town about 80 miles east of London, could not help himself. “Good luck to Trump” was one of the first things he told me over the phone.

Mayor Shonk graciously welcomed me to Ramsgate on short notice, showed me around town and gave me advice on the best pubs to catch the England-Croatia soccer match on Wednesday night.

The game was a real disappointment for England fans, dashing their dreams of going to the World Cup final. But one thing that Shonk is genuinely happy about is President Donald Trump’s first visit to the UK as president.

“These are just my personal opinions,” Shonk told me several times. Sure, Trump is shaking things up at NATO, with global trade and by meeting with leaders like Kim Jong-un, he said. But from where he sits in the second-floor mayor’s office, overlooking the harbor, Shonk says it feels like Trump is moving things in the right direction globally. “I think we’re better off now,” he said. “Anything that’s good for the world is good for Ramsgate.”

“Donald Trump might have a way with bringing all Americans together,” Shonk said. “On the whole, I think he’s achieving some of that … jobs, jobs, jobs. You’ve got many people who feel that they are important in that country.”

It didn’t take me long to find other folks in Ramsgate who say they like the American president.

“At least he says what he feels,” Greg Hale told me. He was enjoying some pre-soccer match beer with friends in the billiards room of the Horse and Groom pub. Hale is a technician who works on the installation of undersea electrical cables for offshore wind turbines and he said he might not agree with everything that Trump says or does. But he definitely likes the president’s style.

“It makes a refreshing change when someone comes along and actually says what he means, does what he wants to do and rattles a few cages along the way,” Hale said, pointing to Trump’s tough talk at this week’s NATO summit as a prime example.

“The US is basically subsidizing [NATO],” he said. So, Trump’s demands for NATO members to boost their spending on collective defense is fair enough, Hale added.

As for the big protests happening in London this week, Hale said the population of the UK capital doesn’t accurately reflect the feelings of the whole country. But opinion polls show that only 17 percent of Brits have a favorable opinion of President Trump — which is only slightly better than Russian President Vladimir Putin.

Hale said that British people who live outside of cities like London will tend to see Trump very differently. “Politicians don’t take any notice of anybody anymore. That’s why that Brexit vote came around, because they weren’t listening no more,” he said. “People have had enough. And I think the US is no different.”

Trump has talked favorably about Brexit, which is another area where Ramsgate mayor, Trevor Shonk agrees with the US president.

“For a thousand years, this country has looked after itself, until the EU, the dreaded EU — this is my own personal opinion — the EU became a monster really,” Shonk said. “It’s become too big, uncontrollable — not just for this country but for all. And this is why they’re going to make sure that we have a hard Brexit,” he said.

We will leave. We will show the world that we can survive. ... We freed Europe. Why are we controlled by it?”

President Trump on Thursday said “I think they like me a lot in the UK. I think they agree with me on immigration." In Ramsgate, conservative anti-establishment candidates who support Brexit have done very well, as one resident told me.

Of course, these views contrast sharply with the message expected to come out of large protests in central London on Friday. The demonstrations are believed to be a big reason why Trump’s visit was downgraded from a full-blown state visit to a working visit, with all of the president’s planned meetings set to take place well outside of the capital city.