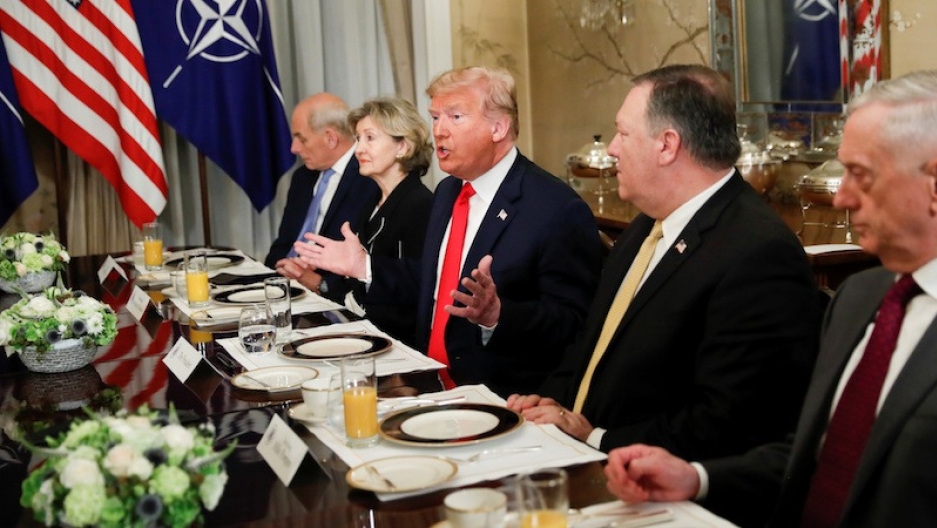 US President Donald Trump gestures as he and US Secretary of Defence James Mattis, US Secretary of State Mike Pompeo attend a bilateral breakfast with NATO Secretary General Jens Stoltenberg ahead of the NATO Summit in Brussels, Belgium.

US President Donald Trump accused Germany of being a "captive" of Russia on Wednesday as Western leaders gathered in Brussels for a NATO summit where Trump wants Europeans to pay more for their own defense.

In a startling public outburst against one of Europe's main military powers, Trump told NATO Secretary-General Jens Stoltenberg that Germany was wrong to support a new $11-billion Baltic Sea pipeline to import Russian gas while being slow to meet targets for NATO spending to protect against Russia.

"We're supposed to be guarding against Russia and Germany goes out and pays billions and billions of dollars a year to Russia," Trump said in the presence of reporters at a pre-summit meeting at the residence of the US ambassador to Belgium.

Trump, who later arrived at NATO's new billion-dollar headquarters in his presidential limousine, appeared to substantially overstate German reliance on Russian energy and to imply the German government was funding the pipeline, which Berlin says is a commercial venture.

With tensions in the Western alliance running high over Trump's trade tariffs on European steel and his demands for more contributions to ease the burden on US taxpayers, the latest remarks fueled concerns among allies over the US role in keeping the peace that has reigned since World War Two.

Baltic leaders fearful of any repeat of Russia's annexation of Crimea called for unity as they arrived at the summit, while Slovakia's President Andrej Kiska said his country was "one of the good guys" because he was increasing defense spending.

Those comments underscored the risks to Trump's strategy by dividing allies between those who spend more on defense and those who do not, such as Belgium, Spain, Italy and Luxembourg, but who contribute with troops to NATO missions.

Trump, who allies hope will sign off on a summit deal to step up the West's deterrence of Russia, will hold talks with German Chancellor Angela Merkel later on Wednesday.

After the two-day summit in Brussels, Trump will meet Russian President Vladimir Putin in Helsinki on Monday.

Merkel later responded to Trump's remarks, saying Germany, one of the biggest troop contributors to NATO missions, was free of Russian control since the fall of the Berlin Wall.

She recalled her own youth in Soviet-dominated East Germany and said she was "very happy that today we are united in freedom, the Federal Republic of Germany. Because of that we can say that we can make our independent policies and make independent decisions."

NATO's Stoltenberg later told reporters that Trump had used "very direct language" but that all NATO allies were agreed that the cost of defense spending must be spread around and that last year had seen the biggest increase in a generation.

After joking that his breakfast with Trump at the US ambassador's residence had been paid by the United States, the NATO chief was frank about the impact of Trump's criticism on the Western allies at a broader level.

"There are disagreements on trade. This is serious. My task is to try to minimize the negative impact on NATO," Stoltenberg told a forum in the margins of the summit.

"So far is hasn't impacted on NATO that much, I cannot guarantee that that will not be the case in the future. The transatlantic bond is not one, there are many ties, some of them have been weakened."

By slapping higher tariffs on European Union metals experts and threatening more on cars, Trump has shown his anger at the US trade deficit with the European Union.

Trump said Germany's closure of coal and nuclear power plants on environmental grounds had increased its dependence, like much of the rest of Europe, on Russian gas.

Merkel has given political backing to the Nord Stream 2 pipeline to import more gas, despite criticism from other EU governments.

However, his comment that "Germany is totally controlled by Russia because they are getting 60 to 70 percent of their energy from Russia and a new pipeline" appeared to mis-state German energy use — about 20 percent of which is accounted for by oil and gas imports from Russia.