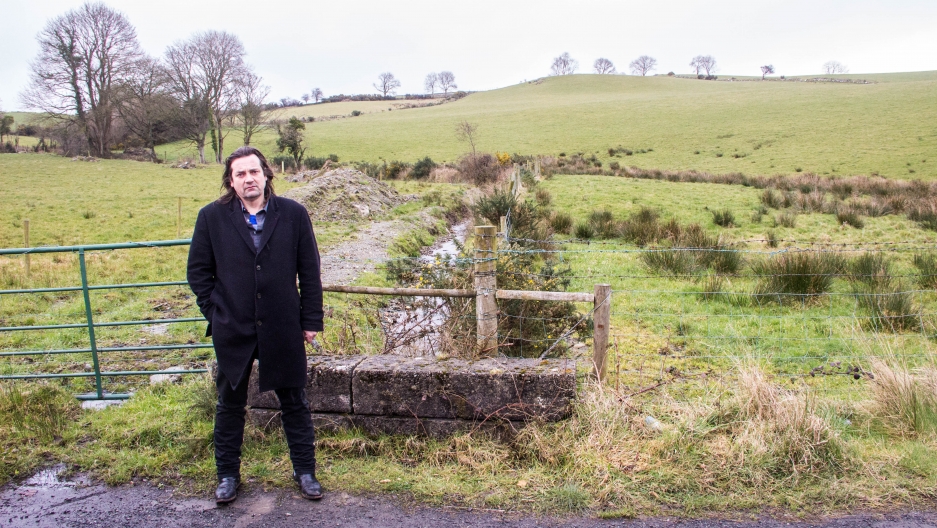 Éamonn Ó Ciardha teaches Irish language and history at Ulster University in Derry. The stream behind him marks the border between Northern Ireland and the Republic of Ireland. It's on a tiny country road just outside of Derry. Ó Ciardha says that trying to impose border restrictions at hundreds of crossings like this one would be "a catastrophe."

On a recent drive from Dublin to the northern city of Londonderry, the only way I knew I had crossed an international border was because the GPS screen in my rental car told me so.

"You have entered the United Kingdom," it said.

The thing to know about the border between Northern Ireland, which is part of Great Britain, and the Republic of Ireland, which will remain part of the European Union after Brexit, is this: there really isn't one.

The Irish land border exists on maps, of course. And politically, it's important. But practically speaking, the only noticeable difference when crossing it is the road signs. In the south, they are written in both English and Irish. In the north, they show miles instead of kilometers. Brexit could bring a much more pronounced divide - and potentially upend an uneasy peace.

"I could bring you to houses where people sleep in Northern Ireland and have their breakfast in the Republic of Ireland," Éamonn Ó Ciardha told me. "And vice versa." 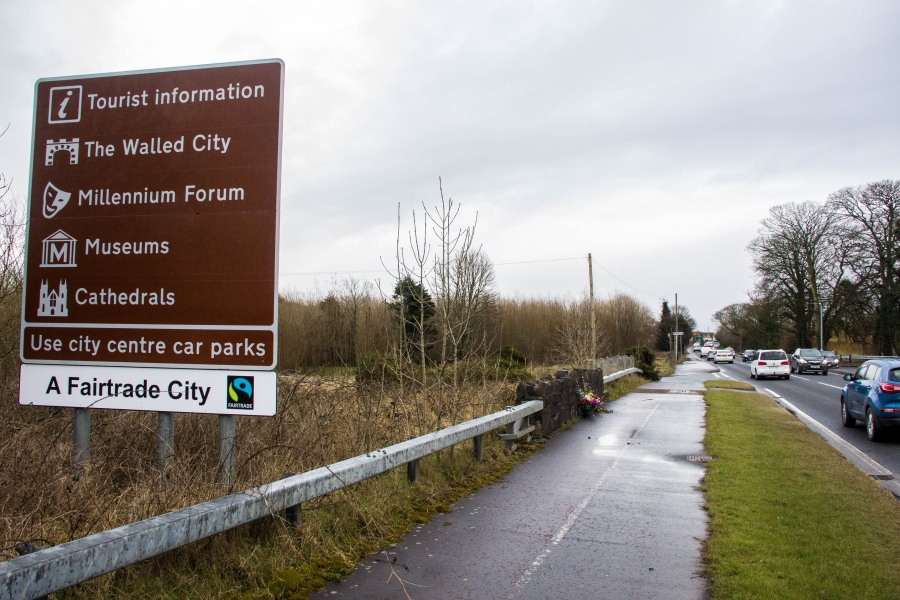 This spot just outside of the city of Derry is where County Londonderry (in the United Kingdom) ends, and County Donegal (in the Republic of Ireland) begins. The small memorial on the left with flowers is a remembrance for the six people who died in an IRA bombing attack here in 1990. Nowadays, traffic flows freely across the border.

Ó Ciardha is a professor of Irish language and history at Ulster University's campus in Londonderry, Northern Ireland's second biggest city. It's surrounded on three sides by the border with the Republic of Ireland.

Directing me to a little country road outside the city, Ó Ciardha had me stop the car alongside a tiny creek, with the front wheels in County Donegal, in the Republic of Ireland, and the rear wheels in Northern Ireland's County Londonderry.

I reckoned there must dozens of back roads like this one, crisscrossing the Irish border.

"Hundreds and hundreds of them. How these could all be policed, how they could have customs posts on them?" Ó Ciardha asked, shaking his head.

That fear is shared by many people who live in and around Londonderry, which is also known as Derry. During the violent years known as "the Troubles" in Northern Ireland from 1968 to 1998, the border was militarized. At times, it was a deadly flashpoint.

On the side of Buncrana Road, just outside the city of Derry in County Donegal, lies a reminder of what the border used to represent. It's a memorial to the victims of a 1990 bombing attack by the Irish Republican Army (IRA) targeting the British army barracks that used to sit at the old border checkpoint.

Here's how a BBC news report described it at the time: "In Derry, five soldiers died at the permanent vehicle checkpoint on a road leading to the Irish Republic on the outskirts of the city. Four masked men took a man from his home in Derry, while his family were held hostage. It's understood he was forced to drive the bomb right into the checkpoint and that it went off before he could give a warning."

Ó Ciardha showed me around the spot where it happened.

"Actually, if you look across, if you see that huge ash tree, you can see it was damaged in the bomb," he pointed out.

"They would ask you your name, where you were from," he said. "They'd put mirrors under the car. They'd maybe search the car. They could arrest you. They didn't have to tell you why they were arresting you. They could hold you for seven days without charging you."

As we talked, traffic flowed freely back and forth on the road, past a new gastropub and across an international border that was essentially erased 20 years ago.

"Ultimately, what you see here is the political, economic and cultural dividend of the Good Friday Agreement," Ó Ciardha explained, referring to the 1998 accord that brought peace to Northern Ireland. "But if every one of these cars had to stop for two minutes, it would be a catastrophe." 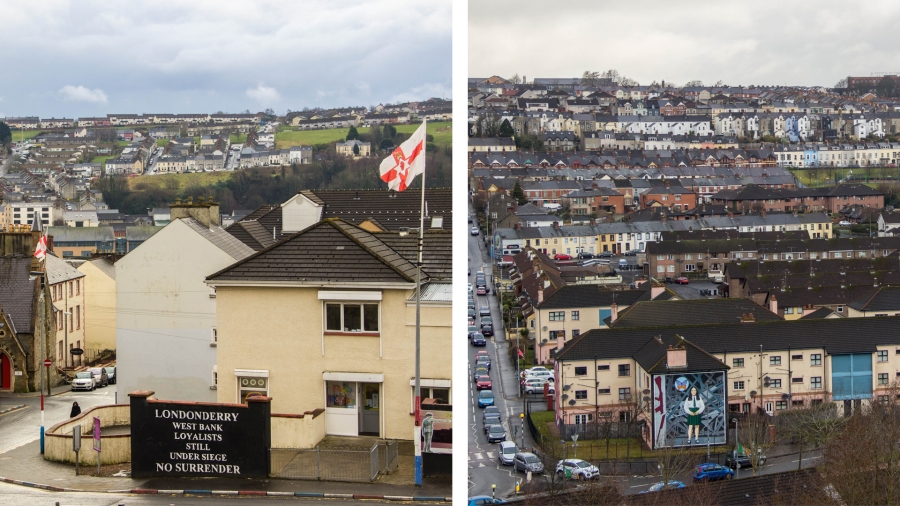 Derry/Londonderry is a lovely, thriving and prosperous city. But there are still some signs of its sectarian history evident today.

It's a catastrophe that pretty much everyone living around Derry would like to avoid. Take Christine and Mark Doherty, for instance. They work, and their children attend school, in Derry. They shop for groceries and gas in Derry. But the Dohertys live in the countryside about 20 minutes away and across the border, in Donegal.

The couple represents a new generation: Mark is Catholic, while Christine grew up Protestant. During the era of "the Troubles," a mixed marriage like theirs in Derry/Londonderry would have been close to unthinkable.

"That's another reason why we moved out to Donegal as well, out of the city: to get away from street politics," Mark Doherty said. "You want the children to grow up without knowing all of the turmoil that we knew."

Times have changed in Derry. But most kids in the city still grow up on one side of the sectarian divide or the other. Protestants attend school and church and play sports with other Protestants, and Catholics with other Catholics, for the most part.

"If we were to choose somewhere to stay in Derry or to live in Derry, making that choice, you would be living in a very Catholic area or a very Protestant area, and having to explain one or the other," Christine Doherty said.

One of the most prominent symbols of change in Derry is the peace bridge connecting the Catholic and Protestant sides of the city across the Foyle River. The bridge was paid for by the European Union, which, as Mark Doherty pointed out, is ironic now.

"With Brexit, there's going to be a border with Europe, you know? So, it wouldn't have been built 10 years from now. That probably wouldn't have happened," he said.

For the Dohertys, who drive back and forth across the border multiple times a day, the idea of an actual border crossing — like the one between the US and Canada, for example — raises lots of questions.

"It's going to make it difficult for us," she said.

Mark Doherty said he remembers driving through British military checkpoints to go to the beach in Donegal, or to visit people in the Republic of Ireland. He hopes the border remains open after Brexit.

"It's hard enough to get to work with three kids in the morning. But if you're going to be held up at a checkpoint, you could be much later," he added.

The United Kingdom is due to leave the European Union in 2019. Figuring out how the border with Northern Ireland will work is one of the thornier issues. So far, British officials have not made much progress.

When I talked with folks in Derry's city center, I heard a pretty strong consensus that Brexit could be very bad for the Irish on both sides of the border. There is already a political stalemate in Northern Ireland, with the two main parties unable to form a government. People worry the politics around Brexit are just making things worse.

"We're in a peace process, but we're not at peace," said Sinead McLaughlin, the head of the Londonderry Chamber of Commerce. "We have an open border, and it's not just an open border for the economy, but it's about social cohesion. It's about people being open to one another, and it's about growing and developing that space that we share. Brexit to us is much more than tariffs. It's much more than exchange rates. It's about who we are, where we live, and how we want to get on with our neighbors and friends."

David Bell, a lay minister at St. Columb's, a Protestant cathedral in Londonderry, told me that some of his neighbors and friends voted yes to Brexit. But Bell said he voted no, for a few reasons.

"The economic uncertainty, the lack of a plan, and the effect it would have on the constitutional status of Northern Ireland," Bell said. "[Northern Ireland] is an integral part of the United Kingdom and wishes to remain so, unless the population here decides otherwise."

Suddenly, after the Brexit vote, there is renewed talk about a united Ireland, Bell said. He and other Protestants here are not happy about that. In the meantime, he said the political fight over what happens with the border is threatening to unravel the peace process.

"That is a real possibility," Bell said. "What happens if this whole thing implodes? And it could happen. Let's not kid ourselves."