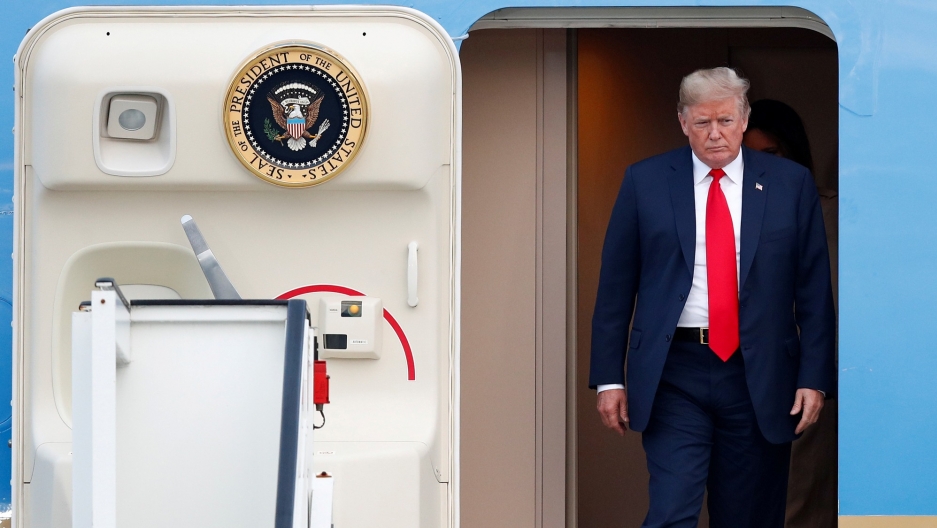 US President Donald Trump is expected to land in Britain on Thursday following a NATO meeting in Brussels where he chided Germany and other European nations for failing to contribute enough to defense spending.

His trip coincides with a tumultuous week for Prime Minister Theresa May's government after two senior ministers resigned in protest at her plans for trade with the European Union after Britain leaves next March.

May appears to have seen off an immediate challenge to her leadership from malcontents within her Conservative Party but Trump's comments ahead of the trip — that Britain was "in somewhat turmoil" and that it was up to the people if she stayed in power — fanned the sense of political crisis.

Trump also said he might speak to former Foreign Secretary Boris Johnson, who quit along with Brexit minister David Davis over May's plans for a business-friendly Brexit which was only agreed by her cabinet last Friday after two years of wrangling.

As May attempts to unify her party behind her proposals, commentators said Trump meeting Johnson would suggest backing for his view that May's plans would inhibit Britain's ability to forge new free trade deals.

Securing a US-UK deal post-Brexit is something both Trump and May's government have heralded as being a major benefit of leaving the EU.

Trump has long voiced his support for Brexit, saying it was part of a global uprising that ultimately thrust him to power, and he was at his Scottish golf resort the day after Britons voted to leave the EU, saying the outcome was a "great thing."

On Tuesday, the president described Johnson as a "friend" who had been "very nice to me, very supportive," even though when Trump suggested in 2015 London had police no-go zones, Johnson, then the capital's mayor, quipped he feared going to New York because of "the real risk of meeting Donald Trump."

When asked directly if Trump would meet Johnson, US Ambassador in London Woody Johnson told BBC Radio: "I'm not sure. That's not on the schedule, but the president makes his own schedule. If the president wants to do something, we'll make it possible."

The ambassador added May had shown strong leadership and that the trip would enhance the special relationship between the United States and Britain.

"We're extremely confident in the ability of the UK to plow through this issue with Brexit and move on," he said.

"She was the first foreign dignitary to visit the US when he became president. So I think that symbolizes how he considers the importance of her leadership in this country right now."

After he was invited last year, more than 1.86 million people signed a petition saying Trump should not be given a state visit because it could embarrass the queen and thousands of police will also be on duty with large protests expected.

A high metal fence has been erected around the US ambassador's central London residence where Trump will spend Thursday night and the embassy sent out an alert warning Americans in London to keep a low profile in case protests turned violent.

More than 50,000 people have signed up to demonstrate in London on Friday when protesters intend to fly a large balloon over parliament portraying Trump as an orange, snarling baby although a counter-gathering to welcome him is also planned.

"It's really kind of irrelevant to what we're trying to do, and it certainly doesn't express the opinion of the British people that I've met," Ambassador Johnson said of the balloon.

While the expected protests are taking place in the British capital, Trump will meet the queen at Windsor Castle where he will be welcomed with a guard of honor before having tea with the 92-year-old monarch.

By Alistair Smout and Michael Holden/Reuters