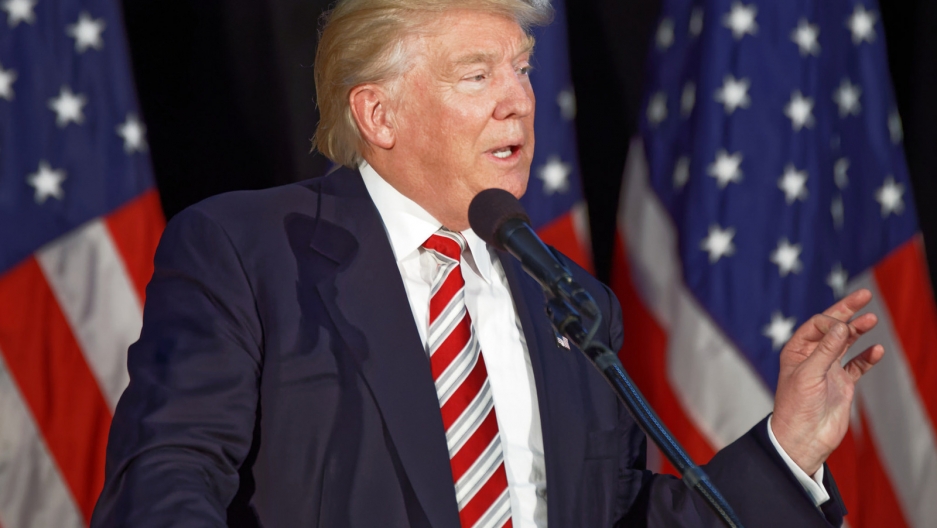 President Trump caused headlines after referring to group of Latino immigrants as "animals" on Wednesday. He said he was only referring to members of the gang MS-13.

Given his history using offensive language, it has become hard for President Donald Trump to make headlines simply for what he said. Yet on Wednesday, he did just that by referring to a group of immigrants as “animals” during a roundtable discussion about immigration policy in California.

“These aren't people,” Trump said on record. “These are animals and we're taking them out of the country at a level at a rate that's never happened before. And because of the weak laws, they come in fast. We get 'em. We release 'em. We get 'em again. We bring them out. It's crazy.”

On Thursday, Trump said his comment was in reference to members of the gang MS-13, a criminal group with Central American roots that originated in Los Angeles in the 1980s.

“When the MS-13 comes in, when the other gang members come into our country, I refer to them as 'animals'. And guess what? I always will,” Trump said.

This is not the first time Trump has used derogatory language towards groups of people representing various ethnicities — in particular, those from Mexico and other parts of Central America, referring to those who are crossing the border as “rapists” during his presidential campaign in 2016.

This kind of rhetoric promotes the idea of humans being subhumans, says David Livingstone Smith, a professor of philosophy at the University of New England and the author of “Less Than Human: Why We Demean, Enslave and Exterminate Others.”

“To use an animalistic language to characterize them is really placing them in an alien biological category,” Smith says. “And it's an attempt to represent them as not meriting the sorts of attitudes that we have to other human beings."

Smith says there are societal consequences to using such language when it comes to constructing broad generalizations toward a particular racialized group of people.

“What listeners tend to do who are responsive to that sort of derogatory rhetoric is to generalize,” Smith says

The concept of dehumanization goes back to the 18th century when white European men constructed a human hierarchy in which the top of the pyramid — themselves — were thought to be more biologically superior than those toward at the bottom, which tended to be sub-Saharan Africans or Native Americans, Smith says.

“Racialization arises out of conflict, exploitation and oppression of human groups. So built into this sort of racial language are implicit ideas of superiority and inferiority. When you dehumanize people you just push them one step further out of the category of the human entirely and into the twilight zone of subhumanity."

Some earliest known examples of dehumanizing language, Smith says, can be found in Aristotle’s “Thesis of Natural Slavery,” which argued that anyone who was not an aristocratic Greek had intrinsic defects. He referred to this large group of people “natural slaves” who were not “fully rational.”

“They weren't quite like cattle because they were capable of what he referred to as a passive rationality, but he thought they benefited from being enslaved so they could vicariously benefit from the superior civility of their masters,” Smith says.

This same line of thinking formed the foundation of Spanish colonists who made their way through the Caribbean, Smith says, in what is now known as Latin America.

The darker parts of history tend to feature dehumanizing language. In the post-Civil War South, African American men were consistently referred to as “beasts” and “bloodthirsty animals,” Smith says. In World War II, people of Japanese origin were grouped with creatures that were sought to exterminated such as lice. Americans were also referred to the same terms by the Japanese, Smith says.

Furthermore, in the most extreme cases of dehumanization — genocides — the hatred toward target groups goes into one of two “unclean creatures,” Smith says: disease organisms (such as lice, leeches and parasites) or bloodthirsty predators.

Given the long line of history that dehumanizing language has had, Smith does not think the growing movement of using such rhetoric — be it Trump or someone shouting derogatory statements on a YouTube video — “is anything novel.” What is new is a shift in what has become socially acceptable to say out loud, as opposed to within the confines of one’s living room — which was one of the largest appeals of certain subsections of White America to Trump in the first place.

“What's happened in the current regime is that attitudes that were previously regarded as socially unacceptable to express publicly have now been given permission to,” Smith says.

“This was part of Trump's appeal that he sort of gave permission for people to be authentic. In this case, the authenticity is a sort of authenticity that one would hope did not exist but it nonetheless does exist. And it will exist until White America really is prepared to come to grips with its historic, national crimes. And I have I'm afraid we're nowhere near that point.”

This article is based off an interview with Tanzina Vega that aired on The Takeaway.