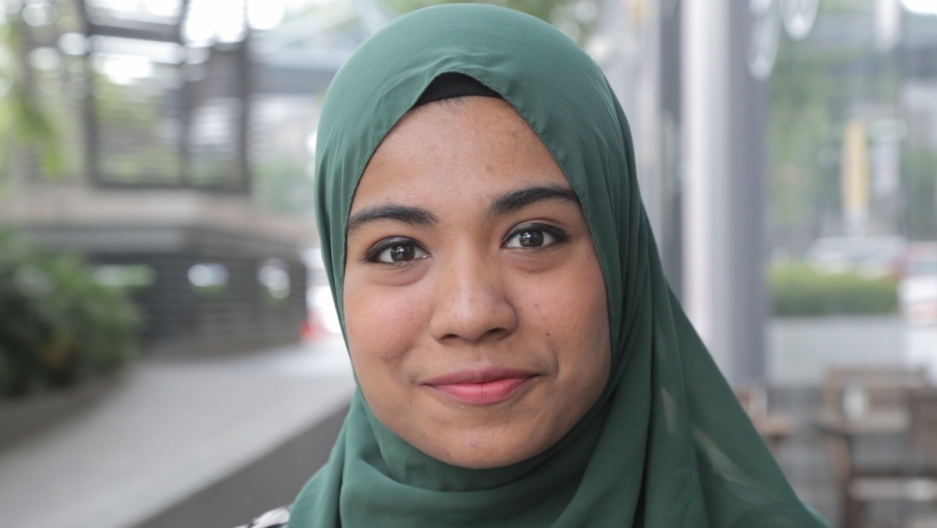 Emellia Shariff, a 28-year-old lawyer in Malaysia, founded The G-Blog (pun intended) two years ago to spark frank conversations on everything from body image to sexuality to religion.

Thoughtful and eloquent, Emellia Shariff is rarely at a loss for words. But finding the right ones is a daily challenge in her quest to get Malaysians talking about gender.

The 28-year-old lawyer founded The G-Blog (pun intended) two years ago to spark frank conversations on everything from body image to sexuality to religion. Online discussions soon spawned offline public forums also hosted by the blog, together forging a new space for debate on subjects often deemed controversial in the Muslim-majority nation — such as child marriage, women in politics and the gender pay gap.

Emellia's widening pool of mostly Anglophone contributors navigates complex gender identities in their posts, flitting between the fast-evolving vocabulary of gender and raw personal narratives. In a recent piece, a transgender man contemplates a "non-cis" future — "cis" is short for "cisgender."

This story is part of a series about the intersection of gender and language, "From ‘Mx.’ to ‘hen’: When ‘masculine’ and ‘feminine’ words aren’t enough," a collaboration between Across Women's Lives and the World in Words podcast. Read about the first episode: A British 'Mx.' tape.

Unpacking words like cisgender (when gender identity matches the sex assigned at birth) or “nonbinary” (gender identities outside of male or female categories) is key, says Emellia, who asked that her first name be used in subsequent references, so as not to carry on a tradition favoring male lineage. She is part of a growing global movement toward greater gender inclusivity. But one of the biggest challenges she faces is translating these concepts into Bahasa Malaysia, Malaysia’s national language, to reach more of the country’s multiethnic and multilingual population.

“Translation is one of our biggest concerns. A lot of the words we need to use to talk about gender simply don’t exist in Bahasa,” she said.

Related: France has plunged into a struggle over gender-neutral language

“Take 'gender' itself. In Bahasa, the word for "sex" and gender is literally the same [jantina]. Whenever I try to write about the difference between the two — one you’re born with, the other how you identify — it’s much harder to make the arguments.”

Enriching the discourse on gender, though, is exactly what The G-Blog set out to do. To explain words such as gender or “intersectionality,” Emellia uses the English word with a protracted explanation in Bahasa until the time, she hopes, that Malaysia’s linguistic authorities broaden the lexicon.

In a bungalow on the outskirts of the Malaysian capital, Kuala Lumpur, a group of mostly women’s rights activists is harnessing the power of language to fight an older battle.

“Women’s concerns, everyone’s concerns,” said one of the activists during a group meeting on March 5. “Empower women, empower the nation,” another chimed in. The group is busy brainstorming slogans to publicize a freshly drafted "Women’s Manifesto,” which sets out their demands to bring about gender equality in Malaysia.

The timing is crucial: Prime Minister Najib Razak is expected to call a general election within weeks, and they want women’s issues — from gender-based violence to equal political participation — at the top of the agenda.

“It is a very critical time for Malaysia in terms of gender equality right now. The right to self-determination, bodily autonomy and overall well-being is under attack,” said Angela Kuga Thas, executive director of women’s rights group, EMPOWER, which organized the meeting. 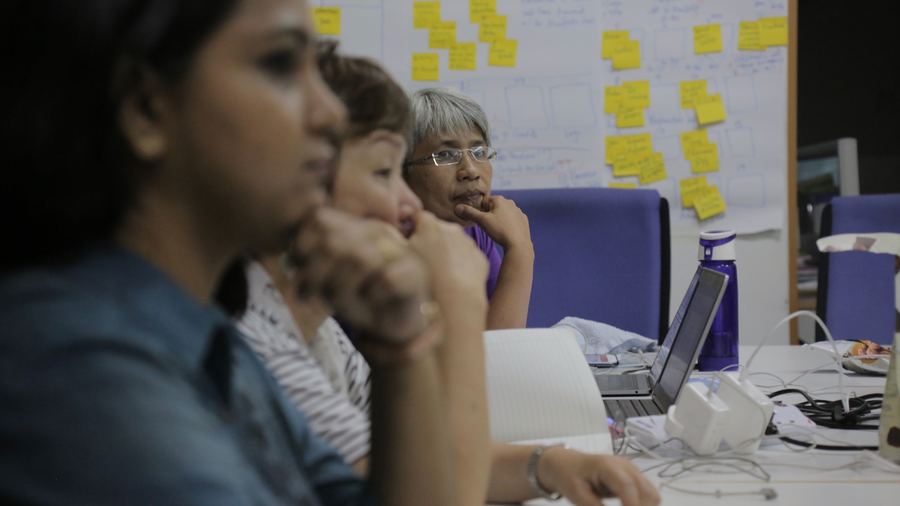 This is a snapshot from the Women's Manifesto meeting on the outskirts of Kuala Lumpur, Malaysia, on March 5, 2018. The woman in the purple is Angela Kuga Thas.

Last month, Malaysia faced a barrage of criticism from a UN committee about an overall deterioration of women’s rights, particularly those of Muslims who are subject to Islamic criminal and family laws under the country’s dual legal system.

Activists also point to growing attacks against lesbian, gay, bisexual and trans people at a time when increasing Islamic conservatism is reinforcing patriarchal norms. Malaysia criminalizes homosexual activity with punishments of up to 20 years in jail and whipping.

Thas hopes the manifesto will bring these issues to light as civil society also pushes for a Gender Equality Act to end gender discrimination in the workplace and public spaces. “It’s becoming a very toxic political environment,” she said. “But we hope this [manifesto] can move our aspirations into something meaningful on the ground.”

The challenge is steep. The nuanced gender debates of Malaysia’s feminists are routinely overshadowed by the misogynistic remarks that frequently arise in Parliament.

Last year, a Malaysian member of Parliament, Che Mohamad Zulkifly Jusoh, made international news when he said women denying sex to their husbands was a form of abuse — amid a debate about domestic violence.

Samy Vellu, a former public works minister, once likened toilets to “new brides after they are completed,” going on to say in his address to Parliament, “After some time, they get a bit spoiled. Even if you do not use them frequently, you need someone to clean them every 25 minutes.”

And in 2007, Bung Mohktar, a ruling coalition MP, publicly referred to the menstrual cycle of a woman lawmaker during a discussion on a leaking Parliament roof. "Where is the leak? The Batu Gajah MP also leaks every month,” he said, triggering condemnation from MPs in other Southeast Asian nations.

Despite a 2012 ban on MPs making sexist statements in Parliament, attacks against women politicians persist.

“From the day that I stepped into Parliament, I’ve seen daily sexist remarks inside the chamber,” said opposition MP Teresa Kok, who is still waiting for an apology from Tajuddin Abdul Rahman, a deputy minister who made a crude gibe using her surname in a 2016 parliamentary debate.

That he was defended by the presiding speaker speaks volumes about a Parliament where only 23 of the 222 elected representatives are women, she says. “They [male MPs] can always get away with it.”

'It's just a joke' doesn't cut it anymore

Bahiyah Abdul Hamid, an associate professor of linguistics at the National University of Malaysia, said “sexist, lewd and aggressive language” has become “normalized” in Malaysian Parliament as in other nations where men still dominate the political sphere.

But when outrage breaks in Malaysia, a common defense among MPs has been to claim “it’s just a joke,” said Hamid. This doesn’t cut it anymore.

“We haven’t had a #MeToo movement in Malaysia yet but more and more women, and even men, are calling out unacceptable behavior,” she said.

For Emellia, the hope is that platforms such as hers will empower a new generation of Malaysians to speak up on matters of gender and the many issues it intersects with, from religion to politics.

As a hijabi feminist, she’s used to questions. “People just don’t expect me to support gay rights, for example,” she said. Others doubt her feminist credentials.

“You always have to remember that if you’re a feminist in a hijab, you’re too liberal for the conservative but too conservative for the liberal. So, everywhere I go, there are different kinds of justifications that I have to make.”

A self-professed defier of stereotypes, she’s more than happy to make them.