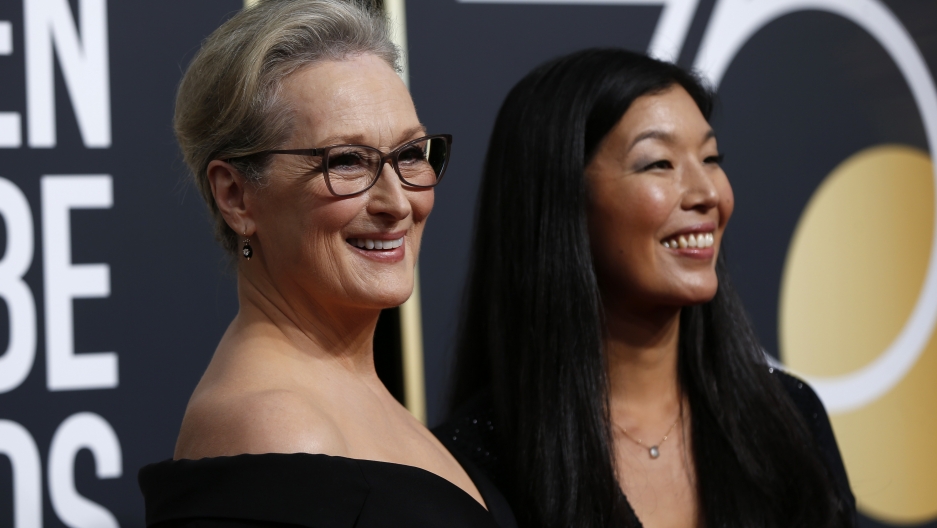 Actress Meryl Streep (left) and the director of the National Domestic Workers Alliance, Ai-jen Poo, are shown at the 75th Golden Globes.

In the three months since actress Alyssa Milano first tweeted about #MeToo, there have been nearly 6.5 million tweets sharing the hashtag. But not everyone’s #MeToo story gets the same amount of spotlight — there's been a lot of talk about who the movement leaves behind.

A PRI analysis of news coverage both in the US and internationally using data from Media Cloud, a research project from the Massachusetts Institute of Technology, shows that Hollywood celebrities and politicians are the focus of #MeToo media coverage. Additionally, perpetrators (often white males) are mentioned far more frequently in stories than their victims and accusers and other activists. And despite the fact that the movement is global on social media, it's still very much a Western phenomenon in the press.

To examine US media, we used Media Cloud’s “US Top Online News” collection, which lists the top 50 online news sources in 2015 according to the Pew Research Center and Comscore. For international media, we dug into the "ABYZ Global English Sources," which has around 1,500 publications listed in the ABYZ directory. An article was counted if it included the person’s name and #MeToo related terms, such as “#MeToo,” “me too,” “accusation,” “assault,” “harassment” or “consent” in the same sentence.

Here's what we learned when we delved further into the numbers.

This year, eight actresses took activists as dates to the Golden Globes. In every pairing except for one, the actress received far more mentions in the mainstream US media related to #MeToo than their activist counterpart. Only Tarana Burke, who founded the Me Too movement well before it had a hashtag, came up in more stories than celebrity Michelle Williams.

Meryl Streep was named along with #MeToo six times more in articles than her date, Ai-jen Poo, the director of the National Domestic Workers Alliance. Emma Stone’s name appeared in eight times as many articles as her guest, retired tennis champion and gender activist Billie Jean King.

However, Burke has received less media coverage overall in the three months since #MeToo went viral compared with Alyssa Milano.

Although coverage of Burke has grown over time, some headlines still imply Milano began the #MeToo movement, such as the following: “Alyssa Milano Wants Her 'Me Too' Campaign to Elevate Harvey Weinstein Discussion,” in Rolling Stone, Variety's “Alyssa Milano on #MeToo Campaign: ‘I Wanted to Take the Focus Off the Predator’” and in E! News, “Alyssa Milano Starts "Me Too" Twitter Movement to Spread Awareness of Sexual Assault and Harassment.”

“We know that many people, unfortunately, get their sole impression of a news story from the headline,” said Pam Vogel, a research fellow at Media Matters, a progressive media research center. Vogel’s research looks at media treatment of gender-based violence, including how headlines about assault are written. Some of the articles that mention Milano as the founder of the #MeToo campaign include an editor’s note about Burke, but Vogel says that the headlines can undo that nuance.

“So much important reporting work can be undone without a well-thought-out headline,” she said.

The accused (white males, mainly) get the most media mentions

The biggest name in #MeToo stories is still Harvey Weinstein. Eighty-four women have accused Weinstein of sexual harassment and assault, and he is mentioned in nearly 6,000 stories in the US. Weinstein’s story is also a focus internationally. Thus far, over 15,000 articles have included his name.

Former Minnesota Sen. Al Franken, who was accused by seven women of harassment (including four who remain unnamed) has been a frequent figure in the press. He was nearly seven times likelier to be mentioned in relation to #MeToo than his accusers.

Louis C.K., who was accused by five women of sexual misconduct, was referenced in the US media nearly 500 times. The names of the women bringing forward allegations against him surface in fewer than 10 articles.

#MeToo is a global phenomenon — but commentators in the West get the most media attention.

The #MeToo hashtag was most popular after Milano’s first tweet — but since then has remained a part of the Twitter conversation, with additional surges of popularity tied to breaking news events.

It’s also a global phenomenon. International versions of #MeToo have also gained traction, particularly the French #BalanceTonPorc” (“Call out your pig”), which is the most popular translated hashtag.

But international coverage of #MeToo in the US tends to focus only on the West.

That’s particularly the case for critics of #MeToo. French actress Catherine Deneuve, who wrote an open letter against the #MeToo movement, was written about more in the US than in France. Although there are more stories written in the US, overall (about twice as much volume than in the French national media), Deneuve was mentioned nearly three times more often.

#MeToo is an opportunity to ‘broaden the conversation’

“When #MeToo hit, it was amazing,” said Bernice Yeung, a reporter for Reveal News. “We had been covering this issue for years, and it was great to see the spotlight, the groundswell on this issue.” But Yeung, who covers issues of sexual assault and harassment among low-wage workers, points out that there are many women who are not named at all in the media.

The bias in media coverage towards celebrities and political figures is unsurprising to Yeung.

“As members of the press, we do gravitate towards people who are brand names or well-known. They lend a level of credibility and familiarity to a topic,” she said.

Still, Yeung is optimistic that those who can afford to say #MeToo publicly can help open up the conversation to all women, citing the Time’s Up legal defense fund, which makes diversity and inclusion a priority. In terms of the media, Yeung sees an opportunity for more inclusive reporting.

“I think there are just voices we should hear more from,” Yeung said. “The majority of us are not in media or Hollywood or politics.”