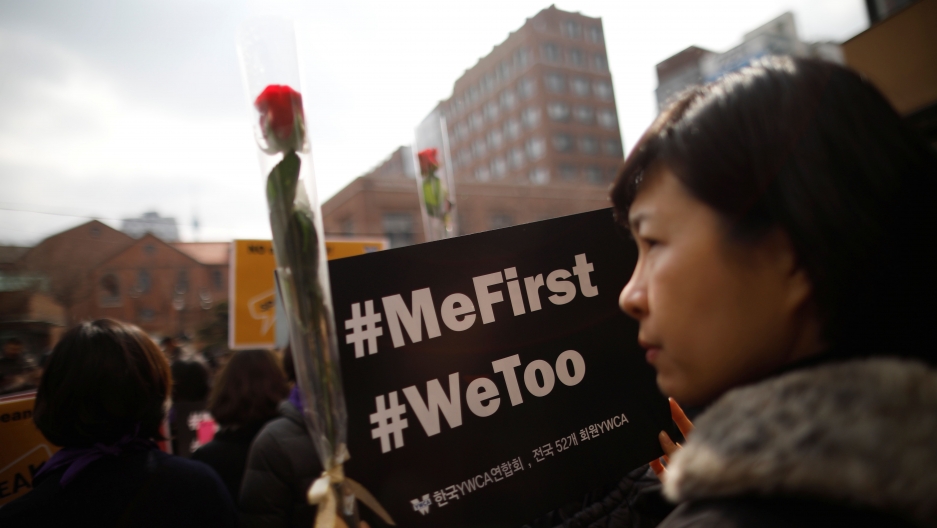 Women attend a protest as a part of the #MeToo movement on International Women's Day in Seoul, South Korea, March 8, 2018.

The initiative, a joint effort of five ministries, comes as the country continues to reel from Tuesday’s news of a prominent politician’s resignation after his secretary accused him of rape.

The politician, the former governor of South Chungcheong Province, Ahn Hee-jung, issued an apology in a Facebook post, saying, “It’s all my fault,” and retracting an earlier statement of denial.

Ahn is the latest in a string of high-profile men to be toppled by South Korea’s #MeToo movement that in the past several weeks has quickly spread through the country’s political, religious, educational, business and arts and entertainment sectors. This reckoning is considered by many to be not just a movement — which had previously been confined to “radical” feminist outliers — but a broad people’s revolution.

“[Now,] there is interest among ordinary women and men,” Cho Hae-lim, a spokesperson of the Korean Institute of Gender Equality Promotion and Education, an arm of the Ministry of Gender Equality and Family, told PRI, adding, “There has been growing confidence that if we solidify, if we get together, we can make society better.”

That public solidarity was on full display Thursday, as hundreds of women and men dressed in black gathered in the capital and chanted "#MeToo" in an International Women’s Day rally. On Sunday, too, participants of the 34th Korean Women’s Conference marched through the streets of central Seoul. In a #MeToo discussion Wednesday, Gender Equality Minister Chung Hyun-back noted, “Winds of change are blowing stronger as victims of sexual violence and supporters are empathizing and banding together.”

The government also announced it will pursue criminal cases against CEOs who ignore or cover up sexual assault within their companies, as well as create a fact-finding group to assess the state of sexual violence within the arts industry.

Cho described the action as an “urgent,” “earnest” and “all-out effort” by the government to expose and root out the nation’s “hidden” culture of predatory sexual behavior in the workplace.

The #MeToo movement took off in January, when a female prosecutor, Seo Ji-hyeon, accused a senior male official from the Ministry of Justice of groping her at a funeral while he was drunk. For the public, which had long tolerated such forms of misconduct, to realize that even professionals charged with upholding national law and order were vulnerable to workplace mistreatment was a blow.

“This case propelled a big response in all levels of Korean society,” National Assembly member Kim Sam-hwa said. “The prosecutor in Korea is believed to be a job with more equality. It was a big shock to Korean society. ... It really raised recognition that nobody is safe from this kind of incident.”

Seo’s story, combined with last year’s installment of new liberal leadership in the Blue House and the country’s outrage over the murder of a young woman in Seoul’s Gangnam district, has been a national awakening, spurring widespread demands for probes, punishment and legal reform, Cho said.

#MeToo has also expanded to #MeFirst, a vow by those who might witness sexual harassment to be the first to speak out against it, as a Seoul court judge, Moon Yoo-seok, did in a Facebook post, and #WithYou, a pledge to stand with victims who come forward.

In the workplace, an anonymous chat app called Blind has erupted with #MeToo, #MeFirst and #WithYou conversations.

In the government, there’s been frank discussion about the country’s deep-seated patriarchy, at the root of the public's previously low awareness of workplace sexual harassment and victims’ limited confidence in their claims being taken seriously. A 2015 government survey found that 78 percent chose not to take action because they didn’t think it would make a difference.

Many victims fear they will suffer the secondary damages of being ridiculed, fired from their jobs or sued for character defamation — as former Democratic Party Rep. Chung Bong-ju said he would do after a reporter accused him of sexual misconduct, according to a Korean news outlet. Chung was expected to announce his bid for Seoul mayor Wednesday but canceled the press conference.

South Korea’s president, too, has thrown his weight behind #MeToo, joining the dialogue at the end of February to “applaud those who had the courage to tell their stories.”

“I actively support the #MeToo movement,” the president, Moon Jae-in said in a cabinet meeting. “We should take this opportunity, however embarrassing and painful, to reveal the reality and find a fundamental solution. We cannot solve this through laws alone and need to change our culture and attitudes.”

Those laws were updated last November with tougher penalties, including higher fines and longer prison terms, for workplaces that fail to investigate sexual harassment allegations or who retaliate against the employees who make them.

There have been some questions, though, of whether these revised regulations, which have yet to go into effect, will make a difference.

“A law can only be as effective as its enforcement,” said Kim Myung-sook, director of labor policy at the nonprofit advocacy group the Korean Women Workers Association. The previous iteration of the Equal Employment Opportunity Act “hasn’t been properly implemented in reality,” she said, with “cases often dismissed due to the strict application of the law.”

Indeed, in 2016, out of 552 sexual harassment claims, only one resulted in prosecution, according to Kim.

But like Moon, Cho stressed the importance of reforming not just policy, but culture. “The government will not limit itself to punishing the perpetrators, but to looking for a more long-term awareness raising through feminism education ... in the regular curriculum, in formal education,” she said.