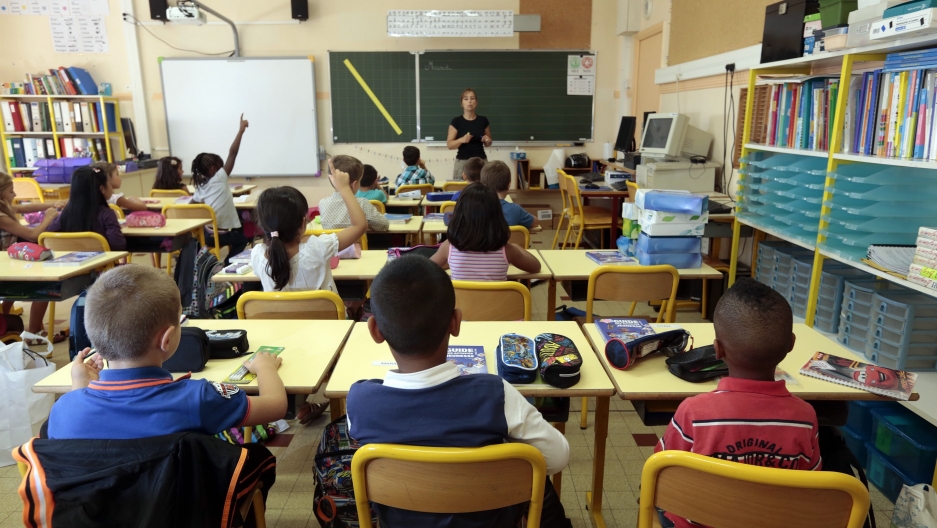 Elementary school children are seen in a classroom on the first day of class in the new school year in Nice, Sept. 3, 2013.

Hands clasped behind her back, Madame Subbiah strode among our fourth-grade ranks with Napoleonic aplomb, reciting verses from French poems of old, while we, her sweaty-palmed pupils, transcribed her words.

Dictée — dictation, or an exercise in conjugation and sadism — is a staple of French elementary education designed to sear the infinite number of grammar and spelling rules into young students’ minds.

In Madame Subbiah’s class, it consisted of an excruciating 20 minutes. God help you if you bungled a subject-verb agreement or — worse — failed to employ the correct gender ending of a word, lest the wrath of Madame Subbiah falls upon your desk. “Mais non, le masculin l’emporte sur le féminin!” she’d yell, that golden rule of French spelling: “The masculine takes precedence over the feminine.”

Like all Romance languages, French is an extremely gendered tongue. All nouns are either feminine or masculine — "knife" is masculine; "fork" is feminine, for instance — and certain of these, when applied to people, can be written in either a feminine or masculine form. "Director," for example, is directeur in the masculine, and directrice in the feminine. A mixed group of male and female "directors," however, takes the plural masculine directeurs, because, grammar handbooks will inform you, the masculine represents the universal.

Three decades after my classmates and I unquestioningly absorbed this rule, however, a new grammar manual released earlier this year by the Hatier publishing house has plunged France into a heated debate over gender-inclusive writing. The new handbook sets forth a method of writing plurals that include both feminine and masculine endings, separated by dots. The gender-neutral plural for director, then, is directeur·rice·s, according to the manual.

At best, this form of inclusive writing is a way to dismantle the patriarchy through a bloodless spelling revolution. At worst, it makes the language of love look like algebra.

Related: Introducing myself as 'they/them/their' at my workplace

The backlash was swift. France’s highest authority on language, the Académie française — a corps of academics founded in 1635 by Cardinal Richelieu, nominally tasked with creating and updating the official French dictionary — issued a fire-and-brimstone declaration, accusing this form of “inclusive writing” of putting French in “mortal peril.”

“Inclusive writing is difficult to read and enunciate, and it forgets that the masculine also functions as the neutral in French,” Patrick Vannier, one of the Académie’s dictionary specialists, told me.

In its four centuries of existence, les Immortels — or "the Immortals" (in the plural, masculine), as the Académie’s members are called — have only ever included eight women.

Their crackdown appears to have only bolstered many educators’ resolve to do away with the norm: This week, 314 teachers from around the country signed and published a petition on Slate’s French vertical, vowing to no longer teach the perennial rule.

“It’s not about promoting feminist-speak, there’s no such thing as a feminist language. But there is such a thing as correct language,” said Éliane Viennot, a professor of literature and language and historian who led the petition. “When you say directrice of research instead of directeur of research, there’s nothing feminist about it, it’s just French.”

Viennot has been on the front lines of language reform since the '80s, when one of the first controversies regarding gendered uses of language broke out: A number of female ministers asked to be called madame la ministre (la indicating the feminine) instead of madame le ministre (le signifying masculine), as protocol had it. The Immortals were horrified. Many women were equally as opposed.

To this day, many women continue to prefer using masculine job names instead of their feminine equivalents — though, that’s often because certain feminine forms haven’t existed for centuries.

As Raphaël Haddad, the founder of language consultancy Mots-Clés, points out, French used to be significantly more feminized.

“The rule preferring the masculine over the feminine didn’t always exist,” he explained. “It was imposed during the 17th century by grammaticians who wanted to use language to affirm male dominance over the feminine.”

“They also worked to disappear the feminine forms of prestigious professions, such as autrice [female author] or doctoresse [female doctor] in order to quash the growing influence of women in intellectual circles at the time.” The Académie doesn’t recognize either of those words.

“Normally, the Académie doesn’t say much. They don’t do anything besides write the dictionary twice a century. But when it comes to the feminization of words, they react. It’s the only thing that wakes them up.” — Éliane Viennot, a professor of literature and language and historian​

Viennot points this very fact out in her 2014 book, "No, the masculine does not take precedence over the feminine: A brief history of French language resistance." “To us, it looks like these words never existed, but thankfully, we have texts that show us they were used,” she said.

According to Viennot, the Académie is merely clinging to its age-old misogyny. “They have a problem with women,” she said. “Normally, the Académie doesn’t say much. They don’t do anything besides write the dictionary twice a century. But when it comes to the feminization of words, they react. It’s the only thing that wakes them up.”

But the Immortals aren’t the only ones balking at the proposed writing.

Pauline, a second- and third-grade French teacher at Saint-Étienne school in France’s Loire region, told me she’s “not really on board with this kind of writing.” The majority of her students are the children of immigrants, whose families speak little or no French, and who would likely struggle with the new form, she explained.

“It’s easy to use gender-neutral words in English because it’s a much less gendered language. That’s absolutely impossible in French.” — Pauline, elementary teacher at Saint-Étienne school

“I teach in a school where kids already have a hard time with language rules, and inclusive writing would make it even more complicated,” she said. “If the goal is to erase the difference between the masculine and the feminine, I think that should be done through education and not by changing spelling.”

Viennot concedes that eliminating gender bias is a tall order when you’re dealing with a gendered language.

Despite the complications and controversies, Haddad is confident inclusive writing is taking off. His own inclusive writing manual has seen 25,000 downloads this past year. As to the Immortal’s apocalyptic prophecy?

“French has never been spoken, written or revitalized by its different uses throughout the world as it is today,” Haddad says. “Languages are alive because they move, because new words make their way into our dictionaries every year.”

Vannier was less optimistic. “French is doing well, but we must be vigilant," he said. "Anglicisms abound.”