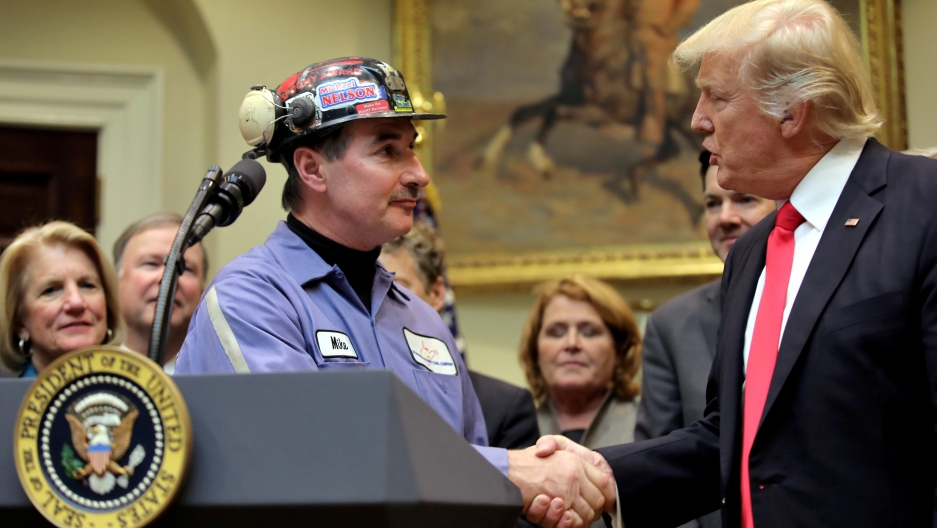 Michael Nelson, a coal miner, shakes hands with US President Donald Trump as he prepares to sign Resolution 38, which nullifies the "stream protection rule," at the White House in Washington, DC, Feb. 16, 2017.

On many fronts — from building a wall on the Mexican border to repealing Obamacare — President Donald Trump’s campaign promises remain unfulfilled after a year in the White House.

But when it comes to environment and energy policy, the president largely seems to be living up to campaign promises he first laid out in a speech in May 2016.

“In most cases, the administration has taken at least the initial step to do those things,” says Emily Holden, climate and energy reporter at Politico. “Some of them are through the regulatory process so they could take a long time, and they’re definitely going to caught up in court battles.”

A year since taking office, here’s a partial list of what has — and hasn’t — happened on the environmental front since President Trump took office.

As promised during his campaign, last June, Trump announced his intention to pull the US out of the UN climate change agreement reached in December 2015 in Paris. The actual withdrawal can’t happen until 2020, and the US sent a small delegation to the most recent UN climate talks in Bonn.

Environmental advocates worried about the world’s largest historical polluter turning its back on the agreement would lead to its unraveling, but that doesn’t seem to be happening. In fact, the last two holdout countries, Syria and Venezuela, signaled their intention to join the agreement in the last year, and progress toward the “rule book” governing the agreement was made last fall in Bonn. But the US has given up its position as a leader in international climate action and other countries, including China, are angling to fill that vacuum.

“You hear people from other countries, especially climate-leading countries, talking about this as an embarrassment, the way that the president talks about his doubts about climate science,” says Holden. “Countries that are taking climate action, I think, are very disappointed by these changes.”

Domestically, states, cities and individuals are increasingly acting independently of the federal government to present a different face of the US to international leaders in climate negotiations.

The Trump administration has moved to lift a host of restrictions on oil and gas drilling.

Lisa Friedman from The New York Times provided a good roundup earlier this month focused on a new Interior Department proposal to open nearly all US coastal waters to offshore drilling:

“Last month Congress opened the Arctic National Wildlife Refuge, or ANWR, to oil and gas drilling as part of the tax overhaul," Friedman wrote. "And last week the Interior Department rescinded an Obama-era rule that would have added regulations for hydraulic fracturing, or fracking, on federal and tribal lands. It also repealed offshore drilling safety regulations that were put in place after the Deepwater Horizon spill.”

Early on in his first year in office, Trump also reversed a Barack Obama decision and approved construction of the Keystone XL pipeline, which will carry tar sands oil from Canada to refineries on the Gulf Coast.

Mixed success with ending the war on coal

In keeping with Trump’s promise to end the war on coal, in October, the Environmental Protection Agency took the first step toward repealing the Clean Power Plan — the Obama-era rule that would have cut carbon dioxide emissions from electrical energy production by about 30 percent by 2030. The rule formed the backbone of Obama’s efforts to combat global warming and has been stalled by legal challenges.

Public comment on the repeal is open through April.

The administration could either revise the rule — likely narrowing its scope — or repeal it entirely, which would leave the Environmental Protection Agency open to lawsuits. Either way, the matter will likely be decided in the courts.

“They’re nowhere near the end of the line on the Clean Power Plan,” David Doniger, director of the Climate and Clean Energy Program at the Natural Resources Defense Council, told The New York Times early this month.

On another front in the war on coal, the administration faced a setback this month when a Department of Energy proposal to subsidize nuclear and coal energy was rejected by the Federal Energy Regulatory Commission.

EPA rolls back regulations and proposes few new ones

Two key regulations the administration has rolled back are the Clean Power Plan and the Waters of the United States rule, which would clarify which waterways and wetlands fall under federal protection.

“They are looking to most likely rewrite that in a way that will be much more narrow, as well,” says Holden. “But both of those will be in the courts for years to come."

Federal climate science continues to be published, but climate change information is scrubbed from public-facing websites

Climate change reports and data are still being released under the Trump administration.

On Thursday, NASA published an analysis showing that the Earth’s global surface temperatures in 2017 ranked as the second warmest since 1880. NOAA released similar data the same day.

Another notable example: The fourth National Climate Assessment, an authoritative look at climate change, was published in November. The report found “there is no convincing alternative” to human activity to explain climate warming.

“Global annually averaged surface air temperature has increased by about 1.8°F over the last 115 years. This period is now the warmest in the history of modern civilization," the report said. "This assessment concludes, based on extensive evidence, that it is extremely likely that human activities, especially emissions of greenhouse gases, are the dominant cause of the observed warming since the mid-20th century.”

The report directly refutes statements from EPA administrator Scott Pruitt that human activity is not a primary contributor to global warming.

But climate change information aimed at the public has disappeared from federal agency websites in a “pervasive, systematic” scrubbing.